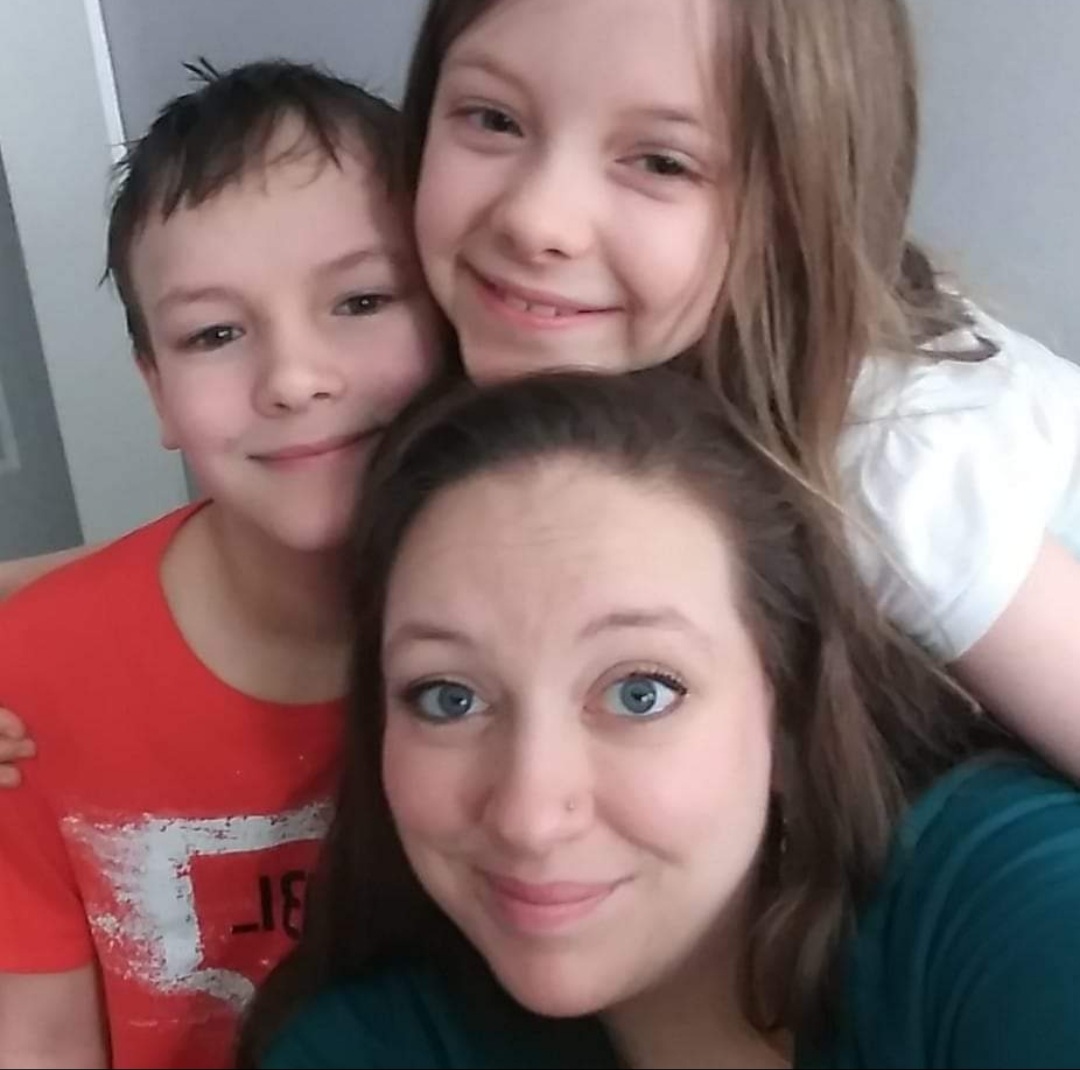 Amber MacQuarrie is 34 and studying business at Southern New Hampshire University. She’s a single mom with a son, Ethan, almost 12, and daughter, Olive, 9, who she homeschools.  Until this summer, she ran a day care in her house.  She supported her family and paid rent of $1,400 a month.

When her landlord sold the building she lived in, the new owner doubled the rent. She’d never been evicted and “to avoid a formal eviction, I left.”

The family and their beloved cat moved into a camper in her aunt’s back yard and began looking for an apartment.  She not only lost her home, but her business, too.

“So here we were, never been on assistance, and there were bidding wars on rentals.”  But in the camper, her daughter’s things began to mold in her bump out, and her aunt and uncle had four kids of their own without having a whole family in their backyard.

MacQuarrie kept applying for apartments including through Red Oak Properties who said she did not qualify for an apartment. In late October, with support from CAP – Community Action Partnership – MacQuarrie and her kids moved temporarily into a room at the Best Western in Concord.  But they couldn’t take their cat. When asked what they were looking for, MacQuarrie said, “Pretty much anything.”

On the issue of housing, Aron DiBacco, a community organizer with Granite State Organizing, said, “The pain point is so strong, it can’t be ignored.”

The numbers around housing are reported widely. They reveal crisis points in the lives of employers, potential employees, and all who seek to build community in the state.  “Housing is a little like a tapestry,” DiBacco said. Housing connects to a job, health care, freedom from racial discrimination, well-being of children, the opportunity to go to school.  “You tug one thread and all the others loosen.” This story touches many threads of the tapestry.

So here are the numbers in summary, again, from the New Hampshire Housing Finance Authority (NHHFA):

0.6% is the vacancy rate for 2-bedroom units statewide. (A 5% vacancy rate is considered a balanced market for renters and landlords.)

20,000 housing units are needed to meet current demand and stabilize the market. The units need to be in a mix of markets including affordable (below market rate).

$24.73 is the median hourly wage needed to afford a 2-bedroom apartment.

Many legislators, advocates, policy makers, citizens on housing committees, housing coalition staff and board members have worked to change policies so that those who want to live and work in the state have access to housing. Filmmaker Jay Childs created a documentary “Communities and Consequences II:  Rebalancing New Hampshire’s Human Ecology” which offers an historical perspective of the consequences of restrictive zoning laws in many New Hampshire communities and the belief systems behind them.

A companion book of the same name is by Peter Francese and Lorraine Merrill. Francese writes that there is misunderstanding about the impact of new housing stock on the cost of education. “It’s a stubborn myth,” he said, that welcoming families and children into a community will increase the taxes.  But that belief has driven restrictive zoning laws and created a barrier to the state’s age and income diversity.

A “Communities and Consequences” segment features the town of Conway where, in 2020, Andy Dean, chairman of the board of the Mount Washington Valley Housing Coalition, and Victoria Laracy, the Coalition’s former executive director, created an affordable housing ordinance the town council unanimously approved and the town voted overwhelmingly to pass.

Jay Childs said in a post-film discussion comparing his 2020 film to what he saw when he produced an earlier – 2008 – documentary.  “Employers are stepping forward with skin in the game.”

Others are seeing movement. Elissa Margolin, director of Housing Action NH said, “We have had a NH Affordable Housing Fund since 1988, but there was no funding source. The state fiscal years of 2022-2023 include $35 million for the Affordable Housing Fund.  It’s unprecedented.”  The draft spending bill from the federal government includes a large increase in HUD’s budget in 2022.  “If enacted, that would provide substantial investment in affordable homes.”

Margolin said, “Communities need to embrace the opportunity to create affordable housing in their community ethos. We’re starting to see the needle move on that. For some people, it’s about inherent individual liberties. For others, it’s about fairness.”

“We have a long ways to go,” Margolin said.  “But I think there is movement.  Almost every candidate for office is running on an affordable housing issue.  That’s coming from the [interest of] constituents.”

Upcoming topics include “ADUs:  How Home Owners Can Become Home Creators: Accessory Dwelling Units and how they can help our regional housing shortage” and the “Seacoast Housing Summit” hosted by Workforce Housing of the Greater Seacoast.”   Details are listed at https://www.nhhfa.org/news-events/events/. Past events are often recorded for later viewing.

When asked about her work and others at Granite State Organizing who are in the trenches, trying to help people find a place to live, DiBacco said, “I don’t see a lot of hope for the people in trouble right now. I can say, there’s a lot of people who care. Maybe if we get more of the rental money out.”

Sarah Wrightsman, director of the Housing Coalition of the Greater Seacoast, said, “The state is about 20,000 housing units behind – the result of years of underbuilding – and we can build our way out of the housing crisis, but not unless every community embraces incremental steps and opts to be part of the solution. We can’t rely on just the cities to fix this. Those incremental steps are just that – incremental – I’d ask communities to start with something small, like revisiting their accessory dwelling unit ordinance, and go from there.

“Housing is a key issue in the upcoming elections. This is true in the mayoral races in Somersworth and Rochester and among those running for Council in Portsmouth. My advice for candidates would be to use the resources they have available – Councilors don’t need to be zoning experts (most aren’t) – use the expertise available. Start a housing committee, host a charrette, apply for a Municipal Technical Assistance Grant, explore the various solutions.”

Amber MacQuarrie has a microwave and small fridge in her room at the Best Western in Concord. Her son’s all about video games and she finally gave in to him wanting to play Fortnite. Her daughter is grieving for their cat. Mac Quarrie is looking for a job, maybe with Shipt, the grocery shopping and delivery service.  If she did that, the kids could ride in the back and work on their school projects.  First, she has to post in the on-line discussion for her business class at SNHU on managers and leaders.

You can reach Terry Farish at tfarish@gmail.com