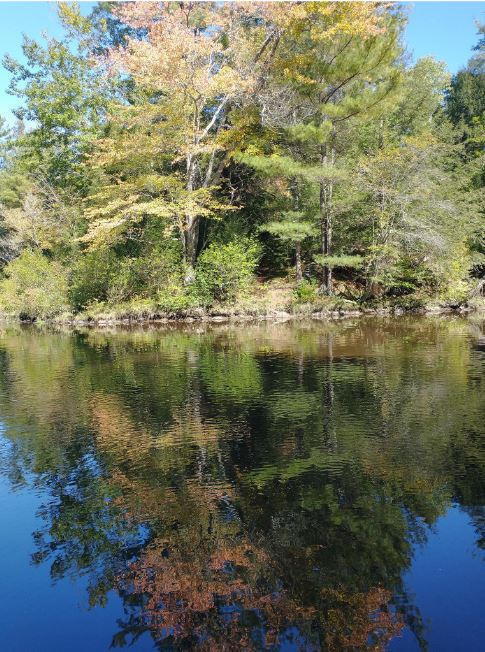 Fly Fishing in New Hampshire during the Fall is my favorite time to be out on the water. The colors, in and out of the water, are spectacular. I check out the foliage maps on my phone and plan accordingly. I saw the foliage up around the Lakes Region is beginning to hit its peak so I packed up my truck to hit some of the tributaries that head into Winnipesaukee.

Normally I would plan to hit some spots where I knew I could catch some nice trout, but this time of year I go for the scenery and a few less fish. There are some rivers and streams that are a little off the beaten path that have little waterfalls that are nestled in maple groves bursting in colors. The red, orange and yellow leaves that have fallen on the water and are gently floating down the stream look like so many sailboats on Winnipesaukee.

The word out of North Country Anglers in North Conway is that the foliage is at peak and the fishing is good. My plans to head up that way to fish were delayed because of some adulting responsibilities. So I opted to head up to the big lake. I wasn’t disappointed.

When I got on the water I had a sweatshirt on, by the time I left I was in shirt sleeves. I started out throwing a streamer. I have been having luck with a Hornburg as of late, so I put a size 16 on since it is small enough for the little panfish to grab hold if the trout were not interested, and that is exactly what happened. I caught a number of Sun fish and some Perch.

I was hoping that maybe some Landlocked Salmon would be coming up the river to spawn, but there were no sightings of any Salmon, Suckers or Trout. I decided to switch over to my nymphing rod and to move up river where there might be some trout. As I was jointing my rod another fisherman pulled into the parking lot.

We exchanged pleasantries and information. Some fishermen like solitude, but I also enjoy talking to others and picking up bits of fishing information like where they have fished lately and where their home waters are. I also like to know which flies are working for them. I have found that Wooly Buggers, Pheasant Tail nymphs and a Caddis are in the conversation.

This gentleman had just come from fishing over at Ellacoya State Park and had similar results, pan fish and no sighting of the bigger fish. As we talked we figured it would be at least another week or two before the Salmon would head up to spawn and then the other fish would follow.

As I was walking up river the warmth of the sun felt so good I almost sat down to take a nap, but while there was a chance to catch some fish in T-shirt weather I didn’t want to squander the opportunity. I found a nice pool below a riffle and started working the pool with a size 18 Blue Wing Olive with a size 20 Beadhead Pheasant Tail.

A few casts later my rod tip started bobbing and I brought in a small Brookie which was starting to get some fall coloring. I didn’t want to press my luck so I reeled in my line and found a comfortable seat in which to enjoy the foliage and the day. I started thinking that this was a kind of day Rip Van Winkle could appreciate.