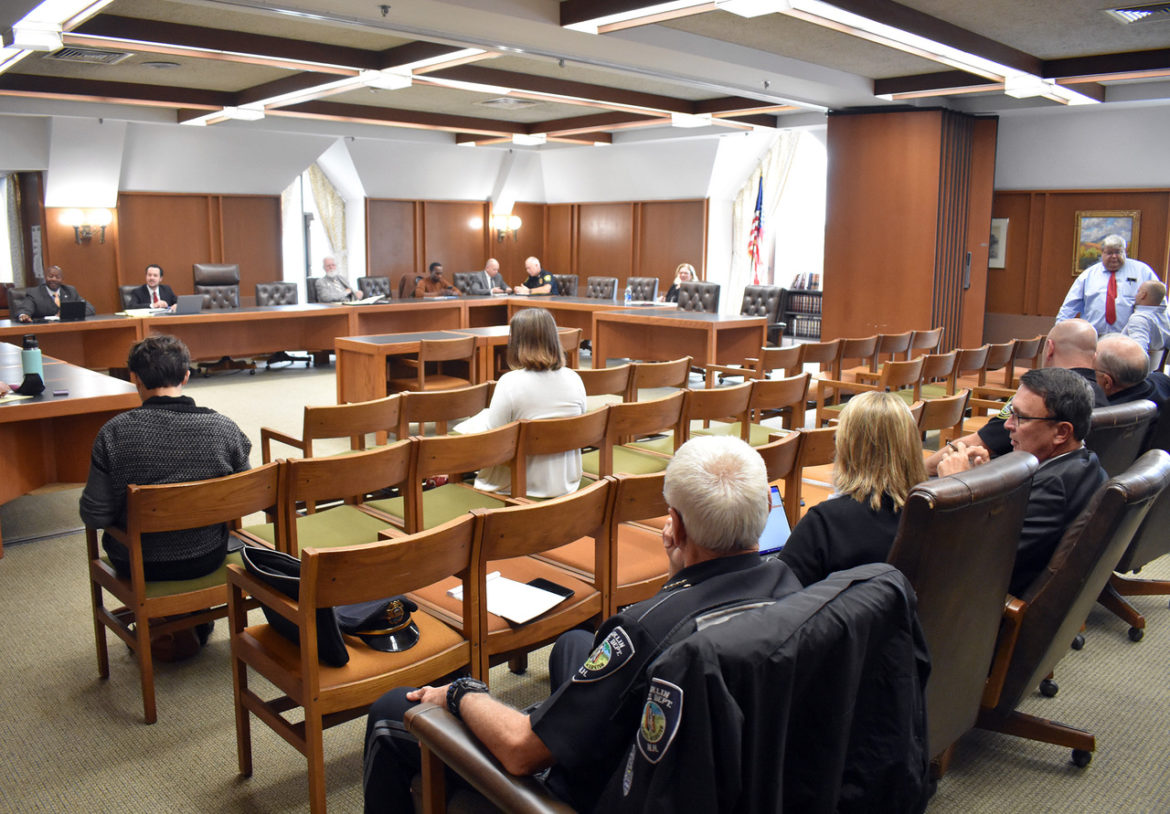 The Commission to Develop Legislative Recommendations Re: Establishing a State Entity to Receive Complaints of Law Enforcement Officer Misconduct prepares for Thursday's meeting in the Legislative Office Building in Concord. (Tom Caldwell Photo)

CONCORD — The commission charged with making recommendations for handling police misconduct complaints held preliminary discussions on Thursday afternoon, focusing on who should hold the authority, where a new state agency would reside, and what actually constitutes misconduct.

Senior Assistant Attorney General Matthew Broadhead led the meeting in the absence of Attorney General John Formella, with the eight other members seated around a U-shaped set of tables in the Legislative Office Building. Nine spectators, including police officers and state staffers, sat in on the hearing.

The commission is tasked with sending its recommendations to the legislature by the end of October. Asked whether the coming weeks’ meetings will be live-streamed because of substantial public interest in the subject, Broadhead said it is something he would take up with the attorney general.

Thursday’s meeting originally was to include presentations by the Department of Corrections and the Sheriffs Association, but they were unable to send representatives. Corrections sent along a PowerPoint presentation for the commissioners to review. Instead, the creation of the new state agency was the main focus of the meeting.

John Scippa, director of the Police Standards and Training Council, questioned why anyone would want to establish a new entity when his council already has oversight of all facets of police work.

“From a fiscal point of view and from an efficiency point of view,” he said, “it would certainly be advantageous to leave it at Police Standards and Training; leave this regulatory authority that already exists, and with a very responsible increase in resources and training, we will be able to, in my opinion, move this forward in a way that speaks to the spirit of what the LEACT Commission was attempting to correct.”

The Governor’s Law Enforcement Accountability, Community and Transparency Commission was established in the aftermath of the videotaped death of George Floyd, a black man, at the hands of a white police officer in Minnesota, which spawned the Black Lives Matter movement. The commission made a number of recommendations to ensure that complaints of police misconduct would be impartially evaluated.

Sen. Sharon Carson, R-Londonderry, suggested that housing the complaint review board within Police Standards and Training would give the wrong impression. Having the review staff at a different location would help to demonstrate that those reviewing officer transgressions are impartial.

That could be bolstered by making sure the review board has diverse representation, not just law enforcement personnel, she said.

Attorney Julian Jefferson of the Public Defender’s Office said the Office of Professional Licensure and Certification already has a built-in infrastructure that includes prosecutors and investigators that “beyond a shadow of a doubt are truly independent.” He quoted Scippa as having said, “I didn’t start this job to investigate other police officers.”

Jefferson referred to the previous week’s meeting when Heather Simmons, executive director of the Vermont Police Academy, addressed the commission. “You heard the Vermont people talking about — they said candidly — ‘We can’t even find enough investigators to investigate our serious cases because it’s a small state.’ That translates to our state as well. And that translates to the fears of the community of this truly independent nature of it.”

He said there is efficiency in using an agency that already has prosecutors, investigators, and other professionals capable of handling complaints.

“This new entity, as I see it in my head, is just purely a clearinghouse for investigating things and determining whether they’re sustaining or not sustaining. It would create a clearinghouse for what’s now commonly referred to as the Laurie List, completely separate and apart from law enforcement.”

Eddie Edwards, assistant commissioner of the Department of Safety, concurred, saying that every licensing board he is aware of has a standalone structure that includes investigations. He said he is not sure the Police Standards and Training Council has enough staff and resources to do what it already is allowed to do.

Rep. David Welch, R-Kingston, asked, “Who’s better-equipped to determine misconduct than the agency that trains them?”

Joseph Lascaze of the American Civil Liberties Union asked why the complaints could not go to the licensing board. “If there wasn’t a shortage of oversight, we wouldn’t have things that fall through the cracks,” he said.

Members suggested beginning their work by coming to an agreement on what constitutes misconduct in the context of complaints. There is criminal misconduct and there are policy violations, and whether minor infractions should be subject to review and inclusion on the Exculpatory Evidence Schedule (Laurie List) is something people will need to agree upon.

Broadhead also raised the question of due process for officers: How can they give an officer a chance to clear his/her name before being placed on the Laurie List while also making sure that prosecutors make egregious cases of misconduct known?

Scippa said he favors having a universal complaint form that goes to a review board to determine whether it rises to the level of misconduct meriting a decertification. The filing of a complaint would make Police Standards and Training aware of the problem. If it was minor, the board could send it back to the local department for action and Police Standards would follow the case to make sure it’s addressed. If it is a criminal matter, Police Standards could immediately suspend the officer until the investigation is completed.

“Let’s create this review board,” Scippa said. “Let it be at Police Standards and Training. Let that review board do the traffic direction as the complaints come in. Because now there’s a way to track all the complaints, make sure that they’re all being addressed at the different levels, and there’s oversight, right? So if you saw something, you’re like, no, this doesn’t pass the smell test. Chief, can you go interview these other two people? Or can you send one of the PSTC investigators down and just interview these people?”

Broadhead ended the session by asking the group to create outlines of what they would proposed for discussion at next Thursday’s meeting.