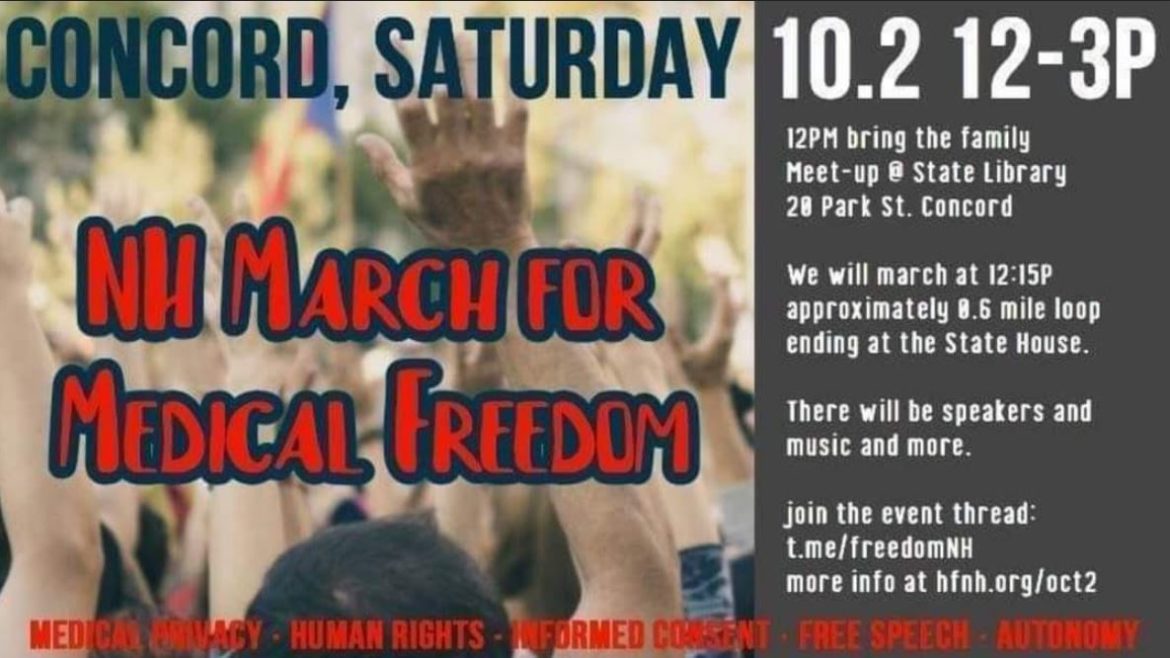 CONCORD – Supporters of medical freedom when it comes to vaccinations plan a rally at the State House on Saturday, Oct. 2 after a morning parade in downtown Berlin.

Organizer Bonnie Hamel of Milan said the day-long effort is meant to rally support for those who believe in freedom to choose whether to be vaccinated, including against COVID-19, and believe they should not be required by an employer or government.

“The North will join the South and rally at the State House,” Hamel wrote in an email to InDepthNH.org.

The New Hampshire March for Medical Freedom will be in Concord from noon to 3 p.m.

State Rep. Timothy P. Lang Sr., R-Sanbornton, who sponsored HB 220, the Medical Freedom Act, that was signed by Gov. Chris Sununu, said he is not aware of other events than the one being organized in Berlin.

He supports the message and wrote, “I oppose the federal vaccine mandate, not your decision to vaccinate or not. Medical decisions belong with the individual unless you can tell me how to un-vaccinate someone? Where there is a risk to the individual, there should be choice for the individual. Informed consent is the standard for medical decisions, let’s not abandon that.”

Berlin Mayor Paul Grenier said he supported the parade based on their 1st Amendment rights, but not the public effort.

“I don’t really support their public effort and remain perplexed why they chose Berlin,” Grenier said. “The two spokespeople are not residents of our city. One is from Milan and the other is from Gorham. If they want to make a public statement that could risk the health of our elderly and school kids, they should do it locally.”

Sununu said he plans to take legal action against President Joe Biden’s recently announced decision to boost vaccinations by requiring all federal employees and employers with 100 or more workers to have their workers vaccinated or face weekly testing.

Sununu said he is awaiting language of the order being developed by OSHA before he takes legal action against it.

Berlin City Councilors unanimously approved a permit for a parade through the Main Street of Berlin Oct. 2 at 10 a.m. through downtown, beginning near Walgreens.
Hamel, who applied for the permit said “our parade starts a day long march for medical freedom. Immediately following the parade a caravan will be traveling down to Concord.”

A poster for the march encourages those with ATVs, UTVs, horses, and other means to join the march at 10 a.m.

The Berlin event will be followed at 12:15 p.m. in Concord starting at the State Library at 20 Park St. with a .6 mile march to the State House where there will be speakers and music until 3 p.m.

“Bring the family,” the poster reads. It states participation is at one’s own risk.

Rep. Leah Cushman, R-Weare, said: “Granite Staters believe they have a God-given right to free agency over their medical decisions. There is an increasing effort to prevent people from normally participating in society based on their private health information. We’re not having it. It needs to stop. The march will provide an opportunity to show our numbers and our conviction that medical freedom must be protected.”

The Medical Freedom Act signed by Sununu prohibits requiring vaccinations to access public facilities, benefits or services, but does not supersede the current law governing needed vaccines to attend public schools, but that would change under one proposed bill.

Democrats have been critical of the Republicans who are opposed to Covid-19 vaccine mandates.

Rep. William Marsh of Brookfield changed his party status from Republican to Democrat Sept. 14 over the issue.

“I cannot stand idly by while extremists reject the reasonable precautions of vaccinations and masks,” Marsh said. “And so I have reluctantly changed my party affiliation. I urge others to consider what is happening and come to their own conclusions.”

A rally Sept. 14 organized by House Republicans opposed the Biden vaccine mandate, but participants also took aim at Sununu and Republican legislators who were attending the meeting.

The poster for the parade and rally reads, “We believe that each individual has the right to make their own medical decisions, including COVID injections, through their own free will and informed consent, not forced, coerced, threatened, bullied, or mandated from an employer or the government.”

An email set up to contact organizers is medicalfreedomfighters@gmail.com