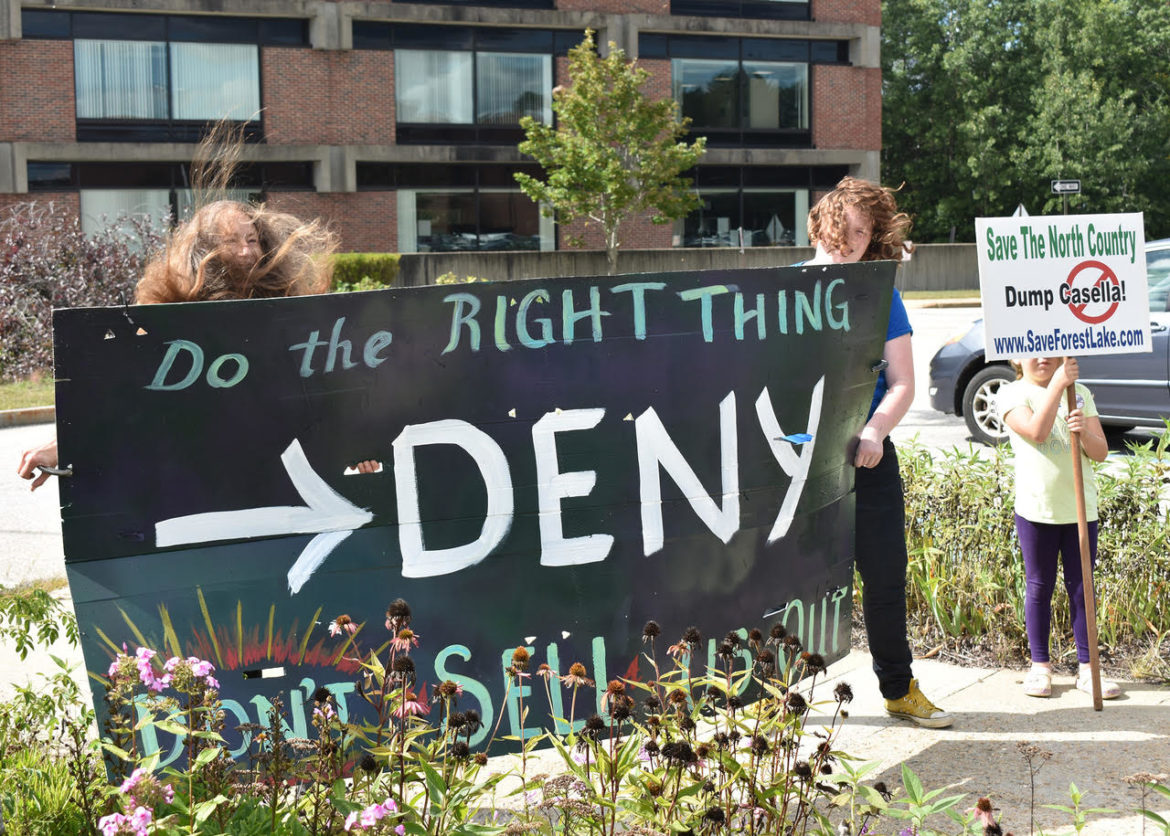 Protesters against Casella gathered in September 2021 at the Department of Environmental Services in Concord.

CONCORD — Punctuated by the chorus of Twisted Sister’s “We’re Not Going To Take It,” a grassroots crowd of North Country residents and members of the Sierra Club, Community Action Works, Forest Lake Association, Conservation Law Foundation, and Save Forest Lake staged a protest outside the N.H. Department of Environmental Services’ Hazen Drive Headquarters on Friday afternoon.

Dr. Adam Finkel, a Dalton resident who served as chief regulatory official at OSHA during the Clinton Administration and as OSHA’s chief enforcement official in the Rocky Mountain states under President George W. Bush, told the crowd, “Granting this permit … in one of the most ecologically worst locations possible is the poster child for a decision that is ‘unjust and unreasonable’ and one that must, and will, be overturned in court. See you there.”

Fred Anderson read a letter from Dist. 1 Sen. Erin Hennessey stating her opposition to Casella’s plan and declaring that the state needs to update its landfill requirements.

“New Hampshire should not be turned into the Northeast’s dumping ground,” she wrote. “New Hampshire doesn’t have a capacity issue, we have an out-of-state trash issue. It would be far better if we beefed up the relevant DES authorizing statutes so there is a specific requirement for DES to assess and make a finding on the impacts on all potentially affected property owners. Additionally, we need a requirement for a net public benefit assessment.”

Overwhelming opposition to the landfill was already evident at the six-hour public hearing in Whitefield on July 14, but it gained more momentum after Assistant Director of Wetlands Rene Pelletier sent a letter to Jon Gay of Casella-owned Granite State Landfill, asking for an amended application that reduced the scope of the review to the first phase of the project.

The day after Pelletier sent the letter, Gay agreed with the stipulations, but asked that the Wetlands Board decision — which under the original application would be due in mid-October — be extended to the end of 2022.

The landfill opponents point out that, by reducing the scope of the review, the Wetlands Board is giving the developer a chance to present a rosier picture of the impact.

Dr. Finkel took particular exception to Gay’s assurance at the July 14 hearing that neither groundwater nor surface water contamination “can possibly happen.”

“Well, someone once gave out a permit after the person said, ‘I cannot conceive any vital disaster happening to this vessel. Modern shipbuilding has gone beyond that.’ That ship, of course was The Titanic,” Finkel said. “While it is true that US EPA’s famous quote, ‘all landfills will eventually leak,’ is now 33 years old, and that the newest landfills are better designed than they were in 1988, the simple truth is this: We can’t possibly know what the average time to failure of a new landfill is, because there are no ‘old new landfills!’ All we have are new landfills that haven’t followed the failures of the older ones — yet.”

What is known that, over the course of the entire three phases of operation, the landfill requires the draining and filling of 17 acres of wetlands; 160 acres of forested wildlife habitat will be clear-cut; and five vernal pools would be destroyed, leading to negative impacts on fauna and wildlife.

The potential for contamination of Forest Lake, Burns Pond, the Alder/Hatch/Bog Brook watersheds, and the Ammonoosuc River are areas of particular concern to residents and those who make use of the public lands.

In a comment submitted to the Wetlands Bureau by Katie Lajoie of Charlestown, who is a registered nurse, she said, “There is no doubt that a massive landfill in Dalton will present unnecessary and unacceptable health risks given the life cycle of landfill technologies. These risks include groundwater contamination and air pollution associated with landfill gases and truck traffic. … The Wetlands Bureau must not be tricked into thinking there is a capacity crisis that warrants a massive landfill near Forest Lake State Park. The real crisis in New Hampshire is a lack of conservation, recycling, and composting.”