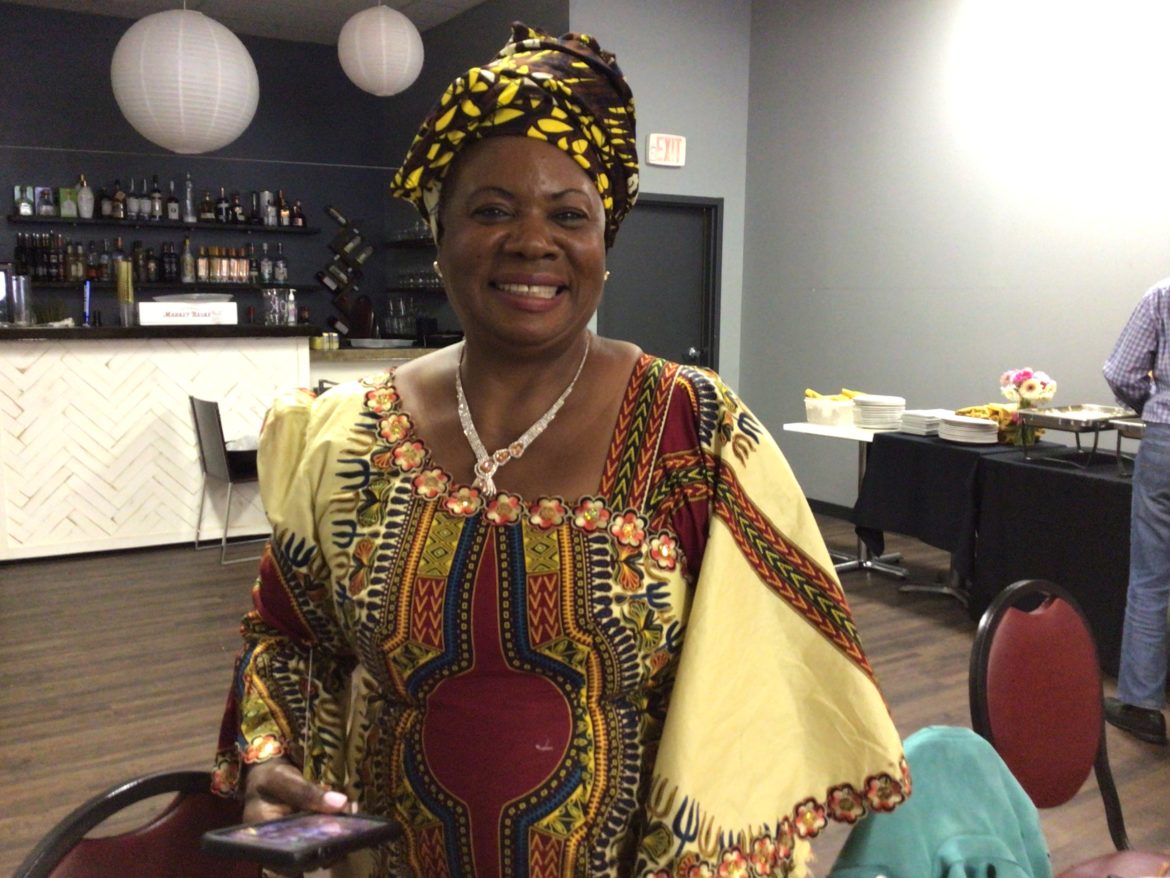 Mary Georges of Manchester was born in the Democratic Republic of Congo. Terry Farish photo

On Saturday, on Elm Street in Manchester, Mary N. Georges hosted, “Time for Tea with the Ladies of ‘Victory Women of Vision’:  A Celebration of Our Mothers and Daughters.”

“Since COVID-19,” Georges called out to the nearly 100 women and a few men who gathered, “our elders were locked inside the house.  We are here today to honor the elders. We missed our mother-daughter event last year. Thank you to be here. We have been very isolated. Our mayor is here.” Everyone applauded Georges and Mayor Joyce Craig who sat at one of the long tables.

Others commended Georges, “You have done so much to help us.” Monumentally, she had worked with each one to make sure they got vaccinated.  Everyone at “Time for Tea” on July 31 was vaccinated.

Women wore traditional dresses from many countries.  Antoinette Kekumbe wore a long, flowered dress and matching head piece she brought from the Democratic Republic of Congo. Jocelyne Tomlinson was born in Haiti.  She dressed in a more Western way. Tomlinson works as a home health aide for Waypoint.  Both have been in Manchester some twenty years.

Before the event, Georges explained that there were 45 older women in “Victory Women of Vision,” a Manchester nonprofit she founded to help immigrants and refugees. She said a few of the women had jobs.  One woman worked at a hotel earning $10//hour. Another in the laundry of a nursing home. Another in housekeeping at Elliot Hospital.

Georges began Victory Women in Elmwood Gardens as a Springfield College project where she earned degrees in human services and organizational management and leadership.  She has been a member of the Manchester School Board and is now running for city alderman.

“Time for Tea,” was really a feast with chicken and creamy pasta and a beautiful layer cake. Women came whose home countries were North Sudan, South Sudan, Benin, Congo, Albania, Kenya, Sierra Leone, Nigeria, Ireland, Haiti. Some were from the U.S.; Victory Women also helps the seniors who live in the Carpenter Center, senior apartments on Franklin Street and others who need help.

Georges said many of the women, depending on their families and their home countries, likely would have worked before coming to NH selling in the street markets. “They sell many things, maybe cassava, flour, rice. Or maybe have a garden, a little farm and sell from the farm. Or they buy fish and sell it. Yes, in the market or from their front door.”

Anela Kruscica, Communications Access Coordinator of the New Hampshire Office of Health Equity, a part of DHHS, said that when refugees first come to NH they do an “aggressive job search because financial assistance stops after eight months. Even homemaker or child care they can list as a skill on their resume.” They leave ESL classes to take jobs. “The elders are left in limbo” without help from children and grandchildren. Kruscica said, In addition to that, “Whatever the trauma was that they survived makes it harder to connect to resources.”

Dr. Nathalie Ahyi-Amendah, formerly coordinator of the New Hampshire Health & Equity Partnership which functions under the umbrella of Foundation for Healthy Communities was at the Victory Women mother-daughter event. She presented on a panel with the Reverend Reneé Rouse, Northwood Congregational Church, Hulda Suazo, Granite State Organizing Project, and Jennifer Katuma, high school student.  They celebrated mothers, shared their losses they experienced in the pandemic, and cheered the elders on. “Hang out with people who mean the world to you,” Katuma said.

When Ahyi-Amendah was asked if there were opportunities for older immigrant and refugee women to work, she began with a soft, “No.”

“Mary Georges tries to connect them to jobs,” Ahyi-Amendah said. “Many are able.  Employment and access to healthcare are the hardest.”  If they had an opportunity, she said, “there are language barriers and they have no transportation. So now the issue is isolation.” Transportation and isolation.

“The number one issue is lack of resources,” Kruscica said. The jobs a few have are extremely low paying. Housing is very expensive.

Before COVID-19, Georges provided both transportation and community. She picked up the women in her car (“East side, West side, Concord”) for weekly gatherings.  “They don’t speak the same language but they can laugh. They cook. We always provide food. We go to the State House, go to a cafeteria, go to the mall to buy material.” Georges herself speaks Swahili, French, Lingala, Creole, her Congolese dialect, and English. “If they are lonely,” Georges used to say, ‘We meet every Wednesday, do you want to join us?’  We gave them food and African fabric.”

During the pandemic, they stopped the weekly sewing and knitting group. Georges explained on their website, “We hear from the elders weekly about their loneliness, food insecurity and safety fears. We continue to remain a source of support by delivering food and grocery cards, reaching out over the phone, and even delivering yarn and craft supplies so the elders can continue the charity knitting.”

On the day of “Time for Tea” the mothers, daughters, and grown granddaughters celebrated each other, and feasted all together for the first time since the pandemic began.

This is the second in an occasional InDepth NH series on older women and employment in New Hampshire. You can read the first story here: Older Women Workers in NH: Lives Behind the Data