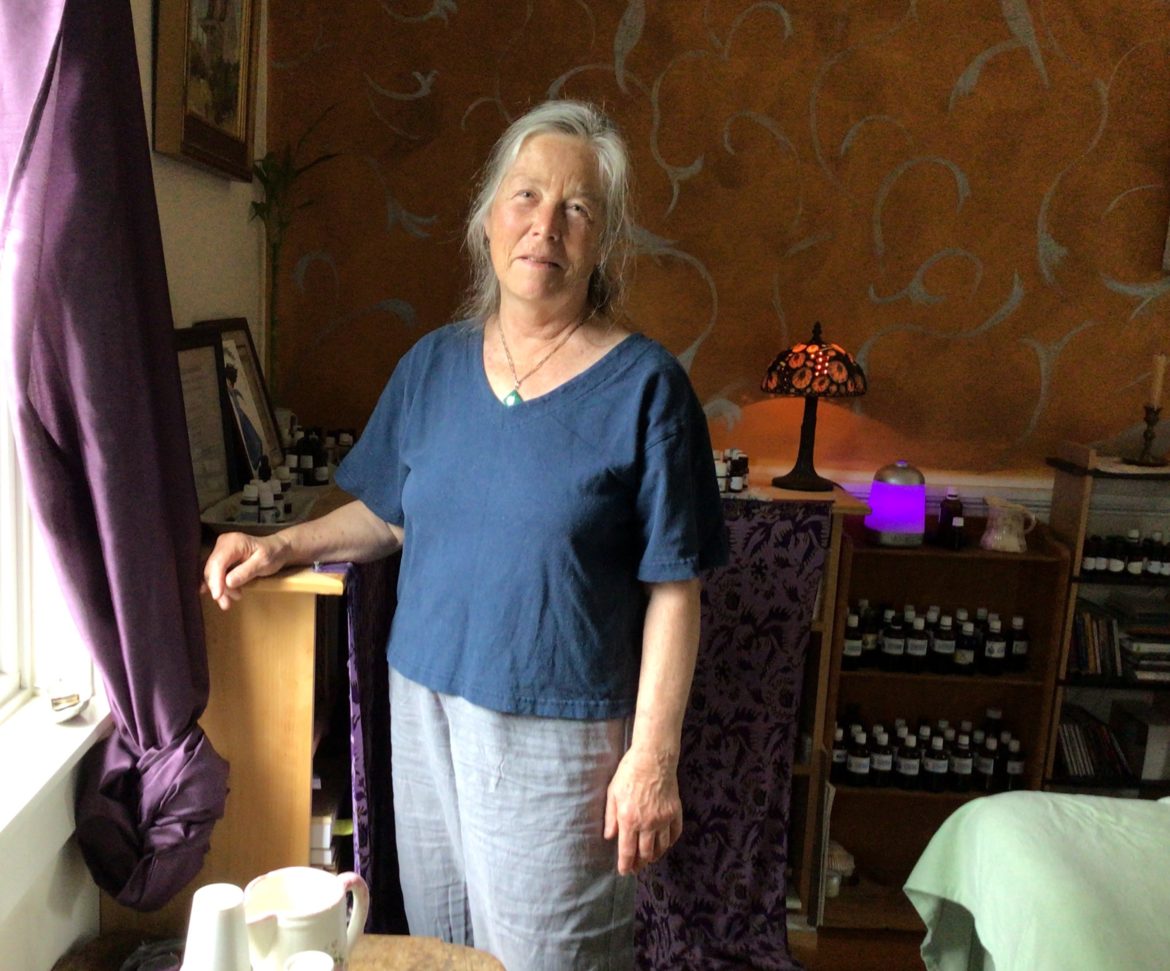 Editor’s note: This is the first in an occasional series on older women in the workforce and unemployed older women seeking to return to work in New Hampshire.

Erine Leigh turned 70 in April. She is a massage therapist in Portsmouth. During the pandemic she stopped paying rent downtown and moved her practice home. She also works as a $16/hr, fill-in, short-order chef at Earth Eagle Brewery.

S Stephanie is 69 and works as an adjunct instructor at New England College in Manchester and recently took a summer job at a Rollinsford hardware store she describes as progressive. She wears a mask and works behind a plexiglass shield.  She earns a little more than minimum wage. She does not think she can ever retire.

Victoria Tkaczevski, 58, is a nurse in the health center at RiverMead Lifecare Community in Peterborough where she has worked throughout the pandemic. She said she has never had trouble finding work in homecare or long-term care but had wanted to work on the medical/surgical unit of a hospital.

Nancy Lyhne Sheridan is the children’s librarian at Colby Memorial Library in Danville. She’s 64.  During the pandemic when more was required of her in areas of technology, she gave focus to developing her tech skills. “I’m thrilled to have so much of the knowledge now.”

Nadine Miller, 54, Deputy Historic Preservation Officer at the NH Division of Historical Resources said, “It feels for me after 15 years here that my responsibility is to mentor the young people coming in.”

But many more women are not in the workforce this summer. Annette Nielsen, economist with the Economic and Labor Market Information Bureau of NH Employment Security reported, “With the economic disruption of the pandemic, female employment declined by 9.6 percent between 2020 Q1 and Q2, a loss of 27,900 female workers compared to 18,100 male workers.”

“The largest drop in the labor force participation rate among females was in the age cohort 25 to 34 years and among females over the age of 65.”

Reasons for older women leaving the workforce range from fear of COVID-19, to becoming the caregivers of grandchildren, to early retirement because a woman could not find a job with the equivalent pay to one she lost, and more.

Older women face obstacles in the workforce. Women in general still face the longstanding gender gap in wages. In New Hampshire, women currently earn 82 cents for every $1 earned by men as reported by the National Women’s Law Center using 2020 US Census data.

Martha McLeod, community engagement coordinator for the NH Alliance for Healthy Aging for New Futures, describes an additional factor. “Ageism is real and impacts older women tremendously. It is largely unchallenged and unrecognized and has accentuated the Covid impacts on older women in the workforce. The laws in NH and on the federal level have no real teeth to deal with this discrimination.”

Nielsen’s report is called “Reviving New Hampshire’s Workforce: 2021 Economic Analysis Report.”  In an interview, she spoke through that lens of bringing people back into the labor force.  She said, “There’s opportunity now, but there is fear. More men in the oldest cohort continued to work. They continued to work at the Lowes and the Home Depots. Men in construction, many never stopped working. There were many new construction and upgrading projects.”

In addition to fear of COVID-19 older women have family care responsibilities that have kept them out of the workforce, namely helping to raise grandchildren.

Other data support this.  The New Hampshire Children’s Trust reports that 14,881 children under 18 live with grandparents.  Mary Lou Beaver who directs the Kinship Program at Waypoint said, “Due to Covid, our numbers jumped.” She has created a “Grandparent Guide” to help grandparents who step in to care for children due to “incarceration, substance misuse, illness, or any number of other reasons.”

The jobs Nielsen sees as most open to older workers are in hospitality and direct care in health fields. “Employment opened up a lot in hotels, nursing homes, or child care.  But, of course, they are the low-paying jobs. And retail,” she said, “but that’s more physical.”

“So if a woman is thinking, should I help with the grandchildren or go to take one of these jobs at $10, $12 an hour, and she’s fearful about Covid, she might wait it out until fall.

“The help-wanted signs around – those are in places where they drastically closed down and people were laid off and employers had to restaff. And seasonal jobs.

“Used to be, places would close down at the end of the season. The employer would call up the same people and they always came back. But with Covid, they ask ‘Do I want to do this?’

Maybe some older people will come back in the fall in the peak foliage time when the young people go back to school. We don’t know.”

McLeod adds a further dimension to the story of older women workers. Speaking of professional women, she said, “Many who have lost their jobs give up at finding comparable employment and either turn to early retirement or lower paying jobs, both of which impacts their quality of life and for some leads to poverty and housing issues. What I often hear from folks is that ageism is like stepping off a cliff. Folks are not prepared or have not planned to retire yet, but the loss of a good paying position leaves them with few options. Our employment security system is not designed to assist older, more experienced workers with job searches for a comparable level position.”

The New Hampshire women I interviewed about being an older woman who is currently in the workforce all have very different stories. They have different needs.

Sheridan is the oldest person on staff at her library. The assistant director is 32.  A dear friend of hers was pushed out of her job at another library; Sheridan is not unaware of age bias but doesn’t feel it.  She loves learning new things like her mother who worked until she was 84. Sheridan feels her privilege in that she can work in a field she loves and has the resources to leave when she needs to.

Tkaczevski, who is a nurse said, “When you apply for a job, they say they don’t discriminate by age, but I think they do. They prefer people who have no experience. Then you are a clean slate.” She is an artist who turned to nursing later in life because she wanted to give outwardly. When the pandemic came, she had PPE on the job and she learned how to protect herself. Although some residents and staff tested positive for COVID-19 in late 2020, Tkaczevski said, “I never felt fearful. I work with wonderful people.”

Miller, as Deputy Historical Preservation Officer, oversees federally funded and permitted project reviews.  “When I was younger, a lot of older, white men did not like me telling them what they needed to get done.” She’s worked with that, and now sees herself as a problem solver, one who understands and sees compromise options. With experience, she’s the one who takes the hard phone calls. “I relish that role.”

Leigh, the massage therapist, is thinking of her four grown daughters and because of them, she doesn’t want to use up her resources. Her bequest to them is all they will receive. She wants to pass on her home, a small brick house in a development built for shipyard workers during World War I. She’s made her own way in the workforce. She said, “I’m good at it.  Because of my training and because I’ve done it a long time.”  She has set boundaries. “Two clients a day, occasionally three.  I get tired.”  She said, “Women are a link in a chain and pass on what came before us.”

Stephanie, working at the Rollinsford hardware store, doesn’t have the resources to stop working at any age. She said, “Women can’t live with low-paying, part-time jobs they string together, without health care, without childcare, and also save for retirement. It’s a lie. Working women will have to keep working.”  She “refused to go in to the classroom at NEC when Covid hit” and was unemployed for six months. Stephanie worked 26 years as an LPN, 19 years as an adjunct instructor with no benefits. She was able to pay off her student loans at age 62.  “In retirement, women will have to keep working.   I’m talking about working women, low middleclass women. Women need equal pay to men.  Women need healthcare and childcare while raising a family, so that we can save.” And live.

Future stories about Older Women Workers in New Hampshire will include a focus on Older Marginalized Women, and Older Women Unemployed and Seeking to Return.