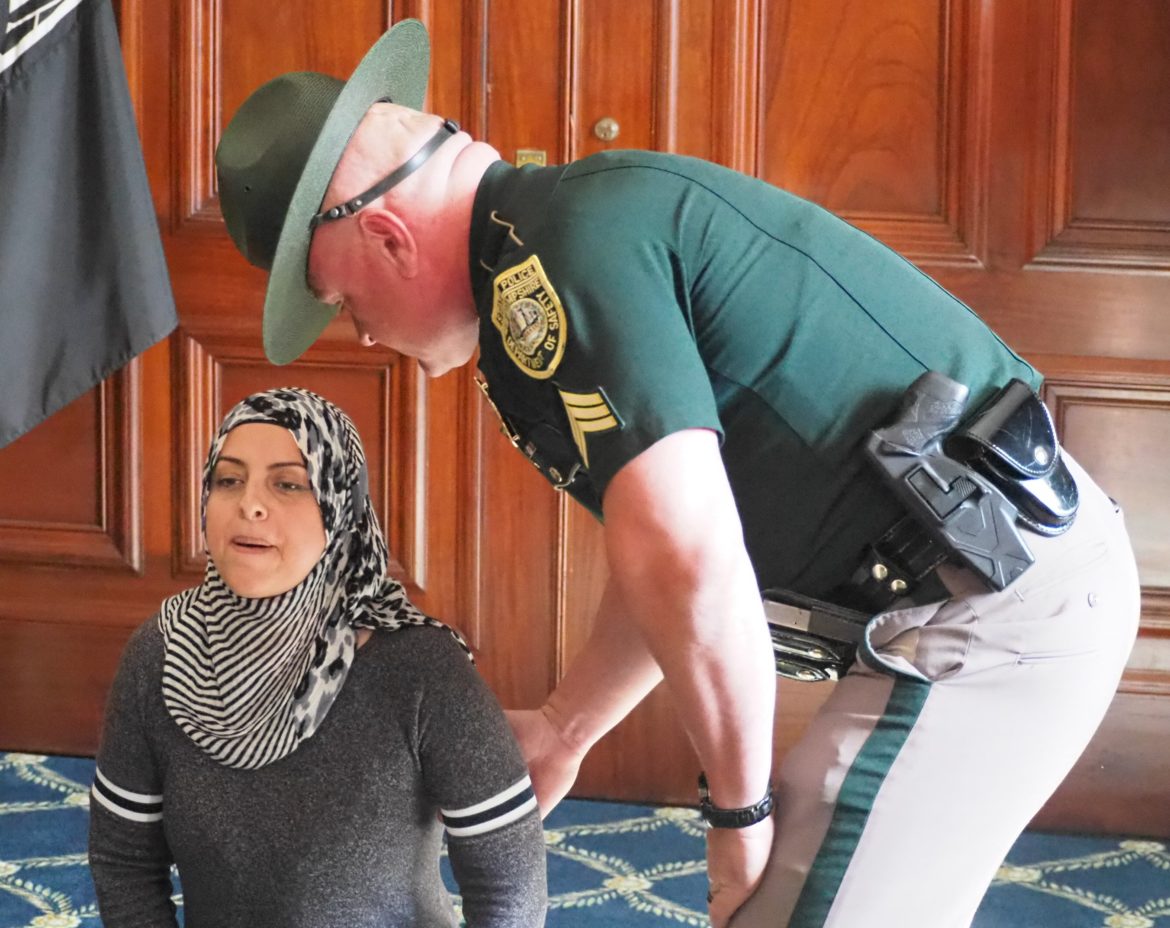 State Police arrest Asma Elhuni at the State House Thursday when she and four others refused to leave at 5 p.m.

CONCORD – After a day of protests at the State House, five activists were arrested when they refused to leave the Executive Council chambers without seeing Gov. Chris Sununu. They wanted to give him an in-person message to veto the budget passed earlier in the day.

All were charged with criminal trespass and given summons to appear at Concord District Court on July 30.

Those arrested were Asma Elhuni, a Lebanon resident who is Movement Politics Director for Rights and Democracy NH (RAD); Ali Brokenshire, now living in White River Junction and serving as RAD’s Leadership Development Coordinator; Dana Hackett, a RAD member from Laconia; James Graham of Lyme; and a Keene resident who provided only her first name, Joy.

As House members debated the budget at the Bedford Sportsplex and Senators conducted business inside the State House, several progressive groups rallied outside the State House expressing objections to features of the proposed budget, including the ban on discussion of “divisive concepts,” the restrictions on abortion, and the inclusion of an expansive school voucher program.

“I am here in Concord today to stand against this immoral budget and ask Governor Sununu to do the same,” said Dana Hackett.  “The dangerous rhetoric that this budget will push into law is unprecedented. If we don’t stand now, then when? The systems of oppression that work in our state will be fueled further by the passage of this budget.”

Following the two-hour rally, dozens of activists sang, chanted, and made speeches in the hallway outside the governor’s office.  After about an hour, most left while the smaller group remained and demanded to speak to the governor.

“I will stay here until the Governor either confirms he will veto this budget or I will get arrested. That’s how strongly I feel,” said Hackett.

For several hours, the small group with a few supporters and observers sat around the Executive Council table discussing politics, singing, and sharing a pizza.  Sgt. Michael Cote of the State Police stopped by at about 2:45 p.m., listened to the singing, and told them they could remain until the building closed at 5.