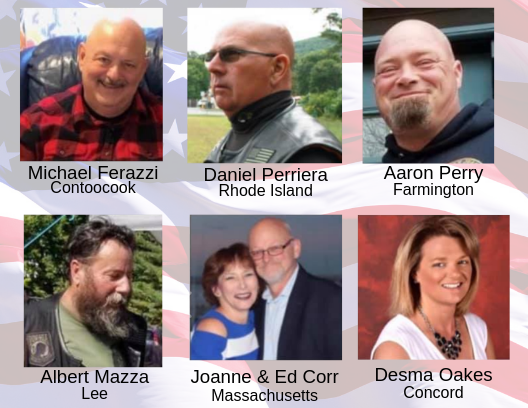 Motorcyclists who died in Randolph crash.

CONCORD – On Wednesday, Governor Chris Sununu issued the following statement ahead of the two year anniversary of the tragic crash in Randolph, New Hampshire, that killed seven members of the Jarheads Motorcycle Club. The Governor also released an update to the comprehensive review the state undertook in 2019 in response to the crash.

“As we reflect on the two year anniversary of the tragic crash in Randolph, our prayers go out to the victims, the survivors, and the friends and family of the Jarhead Motorcycle Club,” said Governor Chris Sununu. “Today’s update is the result of nonstop work over the last two years to improve our systems at the NH DMV. We have more work to do, but citizens can rest assured that we remain committed to making sure meaningful reforms are followed through on and the citizens are served.”
COMPREHENSIVE REVIEW

Following the horrific crash and the revelation that a backlog within the Massachusetts DMV system had failed to suspend the license of the truck driver at fault, Governor Chris Sununu immediately directed an in-depth review of the Division of Motor Vehicles (DMV) processes that support driver licensing to ensure that New Hampshire would never be in a similar situation.

The review provided short term and long term steps the DMV would undertake to improve their systems, among them: continuing to roll out E-Ticket and E-Crash systems, redesigning online ticket pay to improve plea by mail guilty plea processing, implementing online not guilty pleas and implementing the State to State Verification System. A copy of the 2019 review can be found here. The long-term steps recommended can be found on page 5 of the review.
STEPS TAKEN

Over the last two years, the DMV has worked tirelessly to implement the recommended steps from the 2019 review. This past weekend, New Hampshire became the 34th state to implement State to State Verification Service, which required legislative changes to NH state law.

There have been many other system and process improvements at the DMV, including:

Implementation of the State to State Verification System — After necessary legislative authorization was given, New Hampshire on boarded just this past weekend the system designed to facilitate the exchange of convictions with other states.
ONGOING PROGRESS
There are other important steps the state is currently rolling out, including: