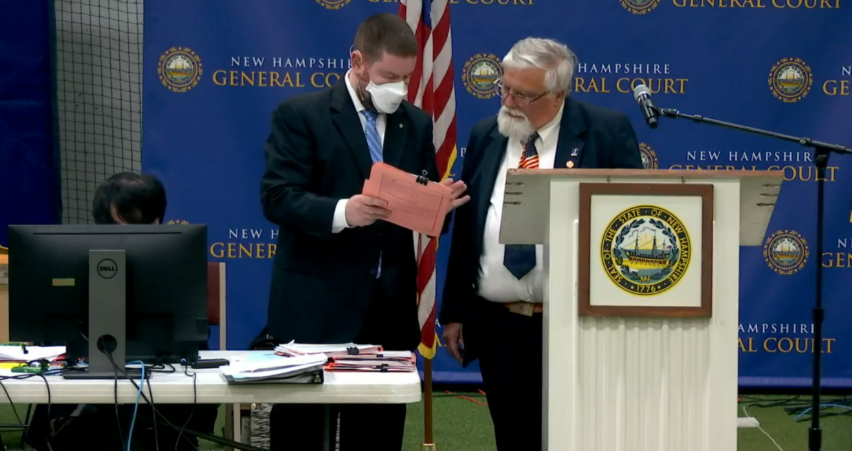 CONCORD — The House decided Thursday that state and local police should not enforce federal laws, regulations or presidential executive orders on firearms if there is not a corresponding state law.

The House also decided to eliminate the state gun line background check for handgun purchases and replace it with the Federal Bureau of Investigation database system that is used for rifle and shotgun purchases.

The House voted 199-177 to approve Senate Bill 154, which would prohibit police from enforcing federal actions restricting or regulating guns. The House met at the NH Sportsplex in Bedford.

The bill has less to do with guns and more to do with the state’s image, said Rep. David Meuse, D-Portsmouth, asking if the state wants to be known for its thriving economy and scenic landscapes or gun running and as the ghost gun capital of the United States.

But bill supporters said the state has no obligation to enforce restrictive gun laws, regulations or presidential executive orders from the federal government, noting the U.S. Supreme Court has ruled on the issue as recently as the 1990s Brady amendment which banned assault rifles.

He cited the state’s therapeutic cannabis program and immigration policies.

And he said the constitution does not require states to enforce federal laws and noted the supreme court has ruled several times on federal firearm laws.

He said if the bill passes it does not change the fact that gun violence will remain a criminal act under federal law.

House Minority Leader Renny Cushing, D-Hampton, said the people of the state and the country are crying out for lawmakers to do something about gun violence.

Other opponents of the bill said it would make it more difficult for the state and federal authorities to deal with white supremacists, militias and other hate groups, and could cost the state a great deal of federal money.

Several called the bill a presumptive action looking for a solution without a problem.

The bill has to go back to the Senate due to changes the House made.

The House Criminal Justice and Public Safety Committee had recommended killing Senate Bill 141, but the House voted 197-180 to approve the bill which would replace the current State Police gun line with the federal background check system.

Bill proponents said the state gun line has been a problem for many years with lengthy delays in approval that amount to waiting periods to purchase a handgun, something continually rejected by lawmakers.

Some noted delays of months for approval, although state law allows a gun shop to complete the sale after five days if the gun line has not acted on the request.

Rep. John Burt, R-Goffstown, said the bill has the support of almost all the second amendment groups, gun and gun shop owners, and national firearms organizations.

“The New Hampshire gun line has been a little bit off the rails for a little bit over 20 years,” he said. “Currently right now there is a 10-minute to 2-hour wait, but six months ago it was four to six weeks and up to two months to get it.”

He noted the gun line has to check with the FBI database before issuing an approval now, but state police also seek additional information that slows down the process.

Burt noted if you go to purchase a rifle or a shotgun, the FBI background check is almost instantaneous.

But opponents of the bill said the federal database lets people not be allowed to purchase firearms to slip through the cracks and would place an unfunded mandate on counties as sheriffs would have to determine if a firearm may be returned to an owner, now done by the state police.

The federal system does not check for critical information on protective or restraining orders nor persons prohibited from having a firearm who does not have a birthdate, said Rep. Linda Harriott-Gathright, D-Nashua.

“With 40 to 50 percent of the homicides related to domestic violence,” she said, “now is not the time to switch systems.”
The attempt to kill the bill failed on a 191-186 vote and then an attempt to prevent the bill from coming before the House for the remainder of the two-year session failed on a 196-181 vote before passing 197-180.

The bill goes to the governor for his action.