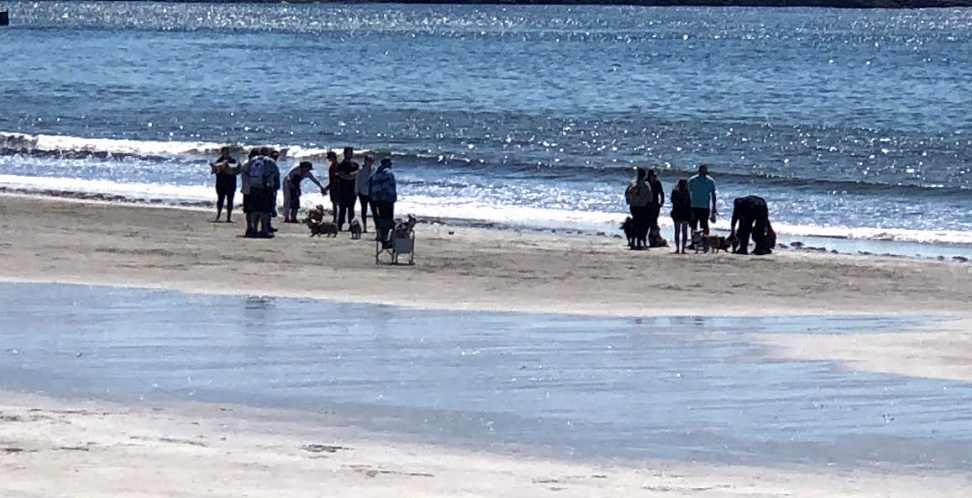 By PAULA TRACY, Out and About

I went to a corgi beach party this weekend. It was to celebrate the end of COVID-19 quarantine in this house, and it made me smile.

Not so much for my little pup, Maisy, who is an otherwise happy soul. There were just too many dogs for her.

It’s been a very long and rough ride for us these 14 months and I cannot say that it has not done a number on my soul and feelings about getting outside with others.

The one thing that has made it bearable has been this little dog, who makes up for her lack of tail, and its wagging, with a really great smile and lots of hugs and snuggles.

During the past year, I visited Facebook on a daily basis and was drawn to groups of people like me who also had corgis.

New Hampshire did not have a corgi group but Maine does, and they don’t mind out-of-staters, so I joined just to read what other corgi owners were doing with their dogs and get advice on how to best care for them.

Particularly attractive were photos of these little dogs in herds chasing each other through the surf at beaches, or chasing balls, or even sitting patiently waiting for treats while humans took their cute wet-faced photos.

There were puppies and old dogs, mixed breeds and other dogs, too. I saw that the Maine Corgi Club was having a meet-up this past Saturday morning from 9 to 11 a.m. at Gooch’s Beach in Kennebunk, Maine. The GPS indicated it would be less than a two-hour drive.

So I put “maybe” in the RSVP line and waited to see what the weather brought.

Fortunately, the alarm went off at 6 a.m. and it was a beautiful blue sky day with temperatures expected to get into the 70s, the first time it seemed in decades.

We were ready for a quick adventure.

I packed up dog bowls, water, a towel, and some treats, made myself a cup of coffee and we were off before 7 a.m. from Center Harbor, heading southeast toward the Atlantic coast.

It was exciting to take a little road trip.

The directions took us on a wonderful path along Lake Winnipesaukee to Alton, then through neighborhoods from Rochester to Milton and Somersworth to Route 9 in Maine and down to Wells, where we stopped before arriving and took a lovely walk at the Rachel Carson National Wildlife Refuge along Route 9 in Wells.

This is a pet-friendly, one-mile loop trail along with a tidal point with views to the open ocean and wonderful sounds of birds, with at least at that early hour, no bugs.

There is no charge but donations are welcome.

I stopped to give her a chance for a bit of exercise before getting out of the car at the beach and going crazy, I expected, with a flock of corgis.

But it seemed it may have been a bad call as she was panting and tired when we returned to the car and drove the few short miles to Gooch’s Beach.

If you have never been, this is a lovely stretch of open white sand and it was low tide, with lots of room. People were out, mostly with their dogs off-leash, not just the knot of corgi families we could see a good distance down the beach.

It was warm, lovely actually, and the first time I had been outside in public without a mask.

Both Maisy and I are fully vaccinated and the CDC said it was OK so we felt we could safely mix with others and enjoy their company in person and that in and of itself was simply wonderful.

While walking toward the beach we caught up with Maple, who looked very similar to her,  and her two parents who had been to a corgi meet up before and told us what to expect. There was no registration, no charge, no formal meeting, just a bunch of dog owners hanging out with their pets and swapping stories, laughing, taking pictures.

It was sort of like the virtual meetups on Facebook, but with sun and sand and water and lots of barking.

When we arrived, Maisy looked at me as if overwhelmed by the scene. There were far too many dogs who wanted to play and she just wanted to sit by my feet and watch the other dogs. If the group came toward her she would shake her head and fake snap at them, and they would move on. Sometimes, she showed a fang.

She was pretty much a corgi party pooper.

She was, however, drawn to the children at the gathering, and the adults. She did find time to chase a ball with one other corgi who was outside the scrum.

As for me, I found it delightful to see all the happy corgi faces splashing in the water and how people just walking on the beach were so delighted to see such a large group of about 20 mostly happy corgis in and out of the surf.

Some asked if it was a coincidence that all these corgis were together. I laughed and explained this was a Facebook group gathering on a periodic basis.

Gooch’s Beach is a perfect dog beach and one preferred by this group.

There is only one entrance down a central set of stairs and it serves essentially as an enclosed dog park, bordered by the ocean.

It allows dogs to be unleashed all day until mid-June. Thereafter, through Labor Day, it allows dogs before 9 a.m. and after 5 p.m.

If you need to thank your dog for helping you get through this long COVID-19 time, Gooch’s Beach is a good call and easily accessed from the Granite State.

There is also a Dairy Queen in Wells which specializes in pup-sized ice creams to finish off the adventure. We stopped on the way home and got a dish, but Maisy was not interested in that either until we got home at 1 and she lapped it up.

While she seemed a bit tired and out of sorts with the whole thing, perhaps it was just our first time and we might go back for another meet-up. I know I would like that very much.