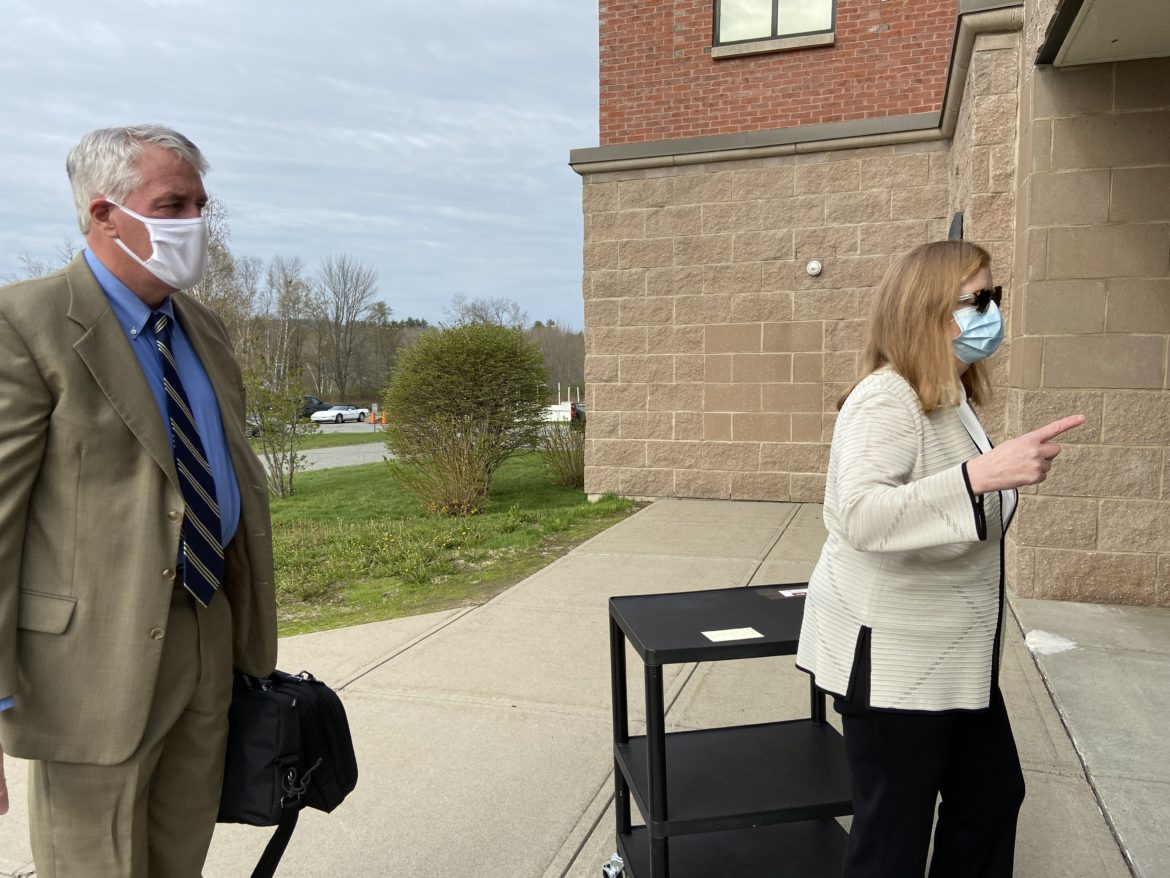 LANCASTER – Former state senator Jeffrey Woodburn’s trial on domestic violence charges against his former fiancée Emily Jacobs got underway Monday in a courtroom that was closed to the public and press who were ordered to watch it live-streamed from an adjacent room.

Four reporters; Woodburn’s girlfriend, Patty Dwyer; another supporter of Woodburn’s and a supporter of Jacobs were seated in a courtroom next to where the trial was taking place in Coos County Superior Court.

The first day of trial was live-streamed into the adjacent courtroom and another courtroom in Grafton County Superior Court, but only the jurors and the parties involved were allowed in-person testimony. Judge Peter Bornstein denied motions from InDepthNH.org and the Berlin Sun to open the trial to the public and media.

Jacobs testified that after one argument, Woodburn said he wanted to have his kids stay overnight the next night. “I said that wasn’t going to happen,” Jacobs said.

She said Woodburn, who is now 55, had been drinking and when he was leaving, he grabbed food from the refrigerator, including her children’s snacks.

“I said those aren’t yours and he hit me in the stomach with his fist…It didn’t hurt too bad. It didn’t hurt like when he bit me,” Jacobs said.

Jacobs said Woodburn then taunted her: “Oh, did I hurt you Em, are you hurt? He was just like mocking me.”

Jacobs was the only witness Monday, first for direct examination by Senior Assistant Attorney General Geoffrey Ward and she will return Tuesday to continue cross-examination by attorney Donna Brown of Manchester representing Woodburn.

Jacobs told jurors she first met Woodburn in 2015 and how the two Democrats both loved politics.

In tearful responses, Jacobs recounted two incidents in which she says Woodburn bit her once on the arm and the other time on her hand and how painful they were.

She spoke of a number of other incidents between December of 2017 and June of 2018 in which Woodburn allegedly threw a cup of water at her face and hit her cheek, broke her dryer door and the door to her home.

Jacobs, a social worker, said she was let go from her job at Littleton Hospital because of Woodburn’s family.

Jacobs said four or five people complained that she had accessed their medical charts without permission. “That was false,” Jacobs said.

The video that was streamed in to the room for reporters and the public was on a screen that was so small it was difficult to determine at times who was speaking. The audio during opening arguments by Ward and Brown was so poor the proceedings were temporarily halted while the court made adjustments to the sound.

A court spokesman said a tape of the oral arguments would be available for the press on Tuesday. Depending on who was speaking and where they were located in the adjacent courtroom, it was sometimes difficult to make out all of the testimony.

Judge Bornstein denied requests from InDepthNH.org and the Berlin Sun to open the court to the public and press as is customary in Superior Court trials. Although that has been somewhat restricted because of COVID-19, the courts have been publicly live-streaming some proceedings.

The news outlets argued unsuccessfully in writing that closing the courtroom during a trial violates the New Hampshire Constitution Part 1, Article 8:

“All power residing originally in, and being derived from, the people, all the magistrates and officers of government are their substitutes and agents, and at all times accountable to them.  Government, therefore, should be open, accessible, accountable and responsive.  To that end, the public’s right of access to governmental proceedings and records shall not be unreasonably restricted…,” they wrote.

In denying the motions, Bornstein wrote: “The procedures in place for livestreaming this trial to two other courtrooms to which the public has access are consistent with constitutional mandates and federal and state law, and with the superior court’s protocols for providing public access to trials in which the defendant is charged with domestic violence offenses.”

Last October, Superior Court Chief Justice Tina Nadeau issued a news release saying the testimony of victims in certain cases would only be live streamed if she or he didn’t object. A court spoeksman said that was never the intent for the Woodburn case.

The court staff has worked with prosecutors, members of the NH Coalition Against Domestic & Sexual Violence, and the defense bar, to revise the jury plan template to prevent the testimony of victims from being broadcast by the court over the Internet without their consent.  In those cases, the court will reserve a number of spaces in the courtroom for public access, Nadeau’s news release said.

Reporters were initially told they could attend the Woodburn trial in person, but the court changed the plan late last week.

Woodburn has filed a notice of self-defense, but it wasn’t clear if he will take the witness stand.

On entering court Monday morning with Dwyer and Brown, Woodburn said: “It’s been three years. I just want to tell my side of the story and have the evidence fairly evaluated.”

On returning from lunch break, in the hall outside the courtroom, Jacobs declined comment.

During cross examination, Brown asked Jacobs repeatedly if her behavior in photographing the bite marks and photocopying pages of Woodburn’s journal were done to use as evidence to compel Woodburn to stay with her since she wasn’t planning to call the police.

Jacobs said that wasn’t true. Brown tried to paint Jacobs as the aggressor and Woodburn as trying to leave the relationship.

Jacobs was the chairman of the Coos County Democratic Committee, had been a delegate for Bernie Sanders, and was running for Coos County Treasurer.

Jacobs testified that she and Woodburn were engaged in November of 2017.

Jacobs said politics were very important to Woodburn, a Whitefield Democrat. She described him as being obsessed with running for higher office than state Senate.

“He wanted to be the governor,” Jacobs said, adding Woodburn coached her on becoming the state’s first lady.

“He wanted me to act in a certain way in public,” Jacobs said. Especially important to Woodburn was not criticizing him in public, she said.

“I loved him very much. I had feelings. It was very hard,” Jacobs said.

After one argument she told him to leave but he was doing his laundry.

“I opened the dryer. I could hear him following me. I took his clothes and threw them out on the lawn,” Jacobs said. Woodburn kicked the dryer door until it broke off, she said.

He then told her to go retrieve his laundry, which she did.

She said Woodburn would make up for his violent outbursts by sending flowers and other loving gestures and say he “was never going to hurt me again. I forgave him.”

She said she didn’t think to call police. “I loved him….We were working on things.”

Woodburn was arrested Aug. 2, 2018, and has pleaded not guilty to four counts of simple assault, two counts of domestic violence, two counts of criminal mischief, and one count of criminal trespass, all of which are misdemeanors. His trial was originally scheduled last year but was re-scheduled because of the pandemic.

The trial is expected to continue through Wednesday.