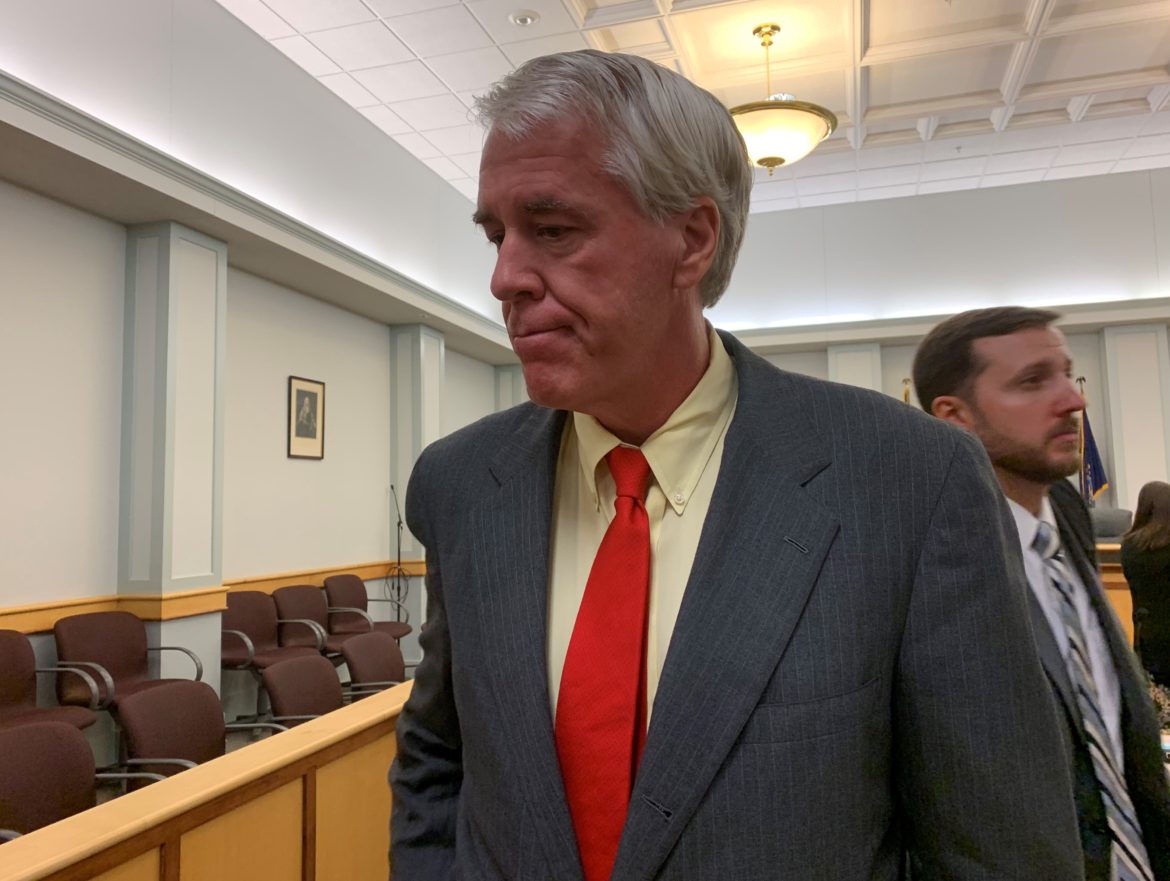 Former Sen. Jeffrey Woodburn is pictured in Coos Superior Court in this file photo. Behind him is Senior Assistant Attorney General Geoffrey Ward.

LANCASTER – The jury that will hear domestic violence related charges against Jeffrey Woodburn of Whitefield was selected Wednesday in Coos Superior Court almost three years after he was arrested while still a sitting state Senator.

Woodburn, 55, a popular Democrat who lost the election following his arrest amid calls for his resignation from members of his own party, sat in the courtroom with his attorney Donna Brown of Manchester Wednesday during jury selection, but spoke only with Brown.

More than 30 prospective jurors were questioned by Brown and state prosecutors Geoffrey Ward and Joshua Speicher, both of the Attorney General’s Office, before the final panel was selected by 3 p.m.

Woodburn has pleaded not guilty and told the court he will claim self-defense. His trial was scheduled for March 2020, but was delayed due to the pandemic.

Brown focused a number of questions on whether potential jurors thought a man should never hit a woman even in self-defense.

“If a defendant is a man and he’s saying it’s self-defense against a woman, would that cause a problem for you?” Brown asked one juror who said no, it wouldn’t.

“I feel I am open to both sides,” the potential juror said.

Jury selection was live streamed with the potential jurors always out of view. They were not referred to by name, just by number.

Senior Assistant Attorney General Ward questioned potential jurors about whether they could follow the law that people can only invoke self-defense if they believe they are in danger of being harmed themselves.

Brown objected to Judge Peter Bornstein about the state’s use of the word victim instead of alleged victim.

“During the questioning of this last juror the state referred to the defendant and the victim. I think that’s a decision for the jury to make. I think that’s argumentative at this point,” Brown said.

Ward said he had litigated the issue before. “We are advocates of the victim. We are advocates and that starts at this stage in the proceeding,” Ward said. It is not objectionable or argumentative, he said.

Ward said jurors would likely hear about immature behavior in the relationship between the victim and defendant and arguments they had but at the end of the day jurors would need to determine whether the state had proven the charges beyond a reasonable doubt.

“Can you separate how either the victim or defendant behaved in this relationship from your duty to determine whether or not the state has proved the charges beyond a reasonable doubt?” Ward asked.
One potential juror answered, “Yes, I can.”

Woodburn is accused of nine misdemeanor counts against his former fiancée Emily Jacobs including striking her in the stomach, throwing a cup of water in her face and biting her arm. He is also accused of kicking her dryer door and breaking it and damaging the door to her home by kicking it. The incidents allegedly occurred between December of 2017 and June of 2018.

Some potential jurors were excused from serving because they knew parties in the case, had been domestic violence victims themselves or were worried about serving because of health problems and COVID-19.

Bornstein told them the jurors would be sitting all over the courtroom to be socially distanced. The witnesses will wear clear masks, he said.

A court spokesman said it wasn’t known whether the alleged victim would ask that her testimony be muted in any streaming video of the trial.

Last October, Superior Court Chief Justice Tina Nadeau issued a news release saying the testimony of victims in certain cases would only be live streamed if she or he didn’t object.

The court staff has worked with prosecutors, members of the NH Coalition Against Domestic & Sexual Violence, and the defense bar, to revise the jury plan template to prevent the testimony of victims from being broadcast by the court over the Internet without their consent.  In those cases, the court will reserve a number of spaces in the courtroom for public access, the news release said.

If a victim does not object to livestreaming, the court will permit individuals who have requested access to watch the proceedings by video. Courts may continue to livestream other court proceedings that do not involve victim testimony when the trial judge deems it appropriate, the release said.

Nadeau said, “In this regard, we appreciate the concerns raised by victims’ rights advocates. We have determined this revised policy would better ensure an appropriate balance between the defendant’s and public’s right to observe jury trials during the COVID-19 pandemic and victims’ rights to prevent their identity from being spread across the Internet.”

Woodburn was arrested in August 2018. The Attorney General’s Office issued a news release accusing him of the following misdemeanors:

Two counts of simple assault (RSA 631:2-a) charging Mr. Woodburn with causing unprivileged physical contact to the adult female victim by: (1) throwing a cup of water in her face and then throwing the empty cup at her as well, striking her in the face on August 10, 2017; and (2) striking the victim in the stomach with his hand on December 24, 2017.

Two counts of domestic violence (RSA 631:2-b) charging Mr. Woodburn with causing bodily injury to the adult female victim, an intimate partner as defined in RSA 631:2-b,III(b), by use of physical force, by: (1) biting the victim on her left hand, resulting in bruising on December 15, 2017; and (2) biting the victim on her right forearm, resulting in bruising, on or between June 9, 2018 and June 10, 2018.

One count of criminal trespass (RSA 635:2) charging Mr. Woodburn with entering or remaining in the residence of
the adult female victim, after forcing open the locked door to the residence, an occupied structure as defined in
RSA 635:1,III, knowing that he was not licensed or privileged to do so on December 24, 2017.