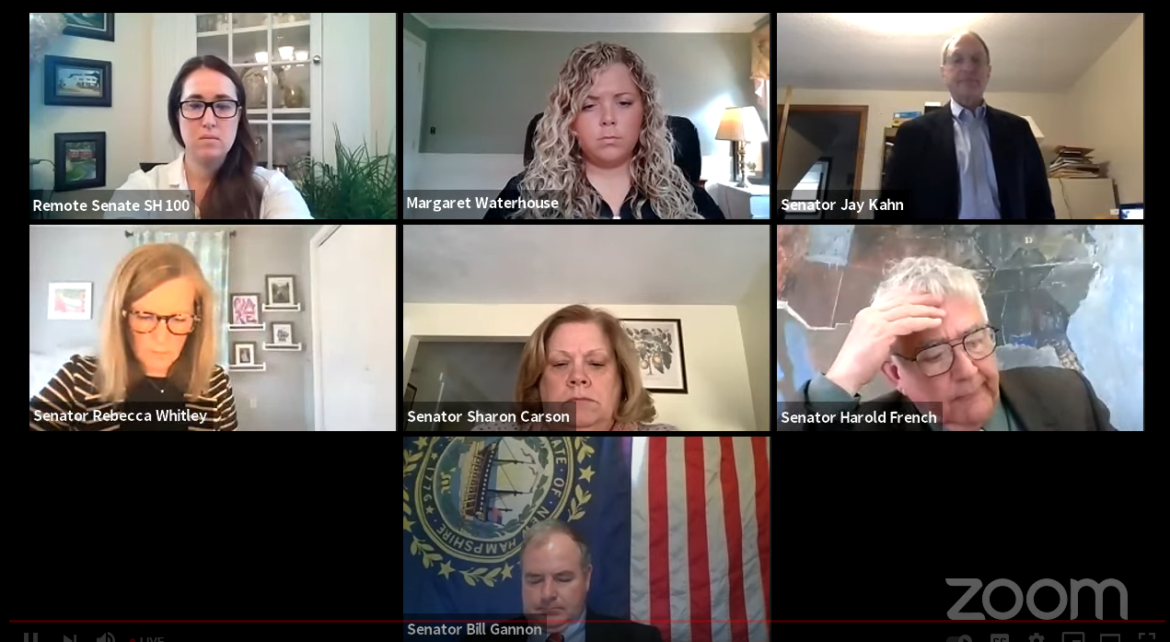 The committee also heard a bill to change adult parole procedures in keeping with an audit of the board last year and a bill that would help the wrongly convicted use DNA testing to prove their innocence.

Another establishes a crime of unsolicited disclosure of an intimate image and one extends the statute of limitation for minors to go to the police to report crimes.

House Bill 270 http://gencourt.state.nh.us/bill_status/billText.aspx?sy=2021&id=70&txtFormat=html, sponsored by state Rep. Casey Conley, D-Dover, clarifies existing statutes for how someone would get testing of biological material that could prove they were not the perpetrator.

New Hampshire has had no cases where someone has been exonerated using DNA evidence but there have been 375 in the nation, the committee was told.

Passing the bill would give a clear path to freedom for the falsely accused but protects the state from frivolous claims, Conley said.

Cynthia Mousseau, staff attorney at the New England Innocence Project, said the bill is important for those who have been wrongly accused.
As a former defense attorney in New Hampshire and Massachusetts, Mousseau said, “I know there are folks that are in prison for things they haven’t done.”

Elizabeth Powers, of the Innocence Project, said of the 375 exonerations based on DNA nationally, about 44 percent ended with the true perpetrator being identified and prosecuted.

“This would clarify and modernize,” Powers said. She noted the benefit to society of having the right perpetrators prosecuted and the possible reduction in future crimes that could result if they were free and the wrong person was convicted.

Albert Scherr, a UNH Law professor who has handled defense cases involving DNA for over 30 years, supported the bill.

Scherr said there are not that many cases with DNA evidence available for testing and there would not likely be a rush to the courts because it is particularly hard for people in jail to get legal counsel.

A total of 71 people indicated support for the bill and there was one who was opposed, but did not speak at the hearing.

A bill that would reduce the penalty for certain first-offense drug possession charges, HB 615 http://gencourt.state.nh.us/bill_status/billText.aspx?sy=2021&id=188&txtFormat=html was praised by some as a way to help first-time offenders avoid a life of being a convicted felon, but was opposed by law enforcement.

Rep. Brian Seaworth, R-Pembroke sponsor, called it a bipartisan effort to help people. He noted this would not extend to those who are dealing drugs.
“This is about simple possession,” he said.

Bedford Police Chief John Bryfonsky, speaking on behalf of the New Hampshire Chiefs of Police Association, said he was “adamantly opposed to the bill.”

He said the bill does not look at the types of drugs that are tearing the state apart and noted the last three officer-involved shootings in the state involved people using methamphetamine.

The bill has an amendment attached from the House that looks at addressing quantities of fentanyl in the bill, which he said has been responsible for the bulk of overdose deaths in the state since 2012.

“Make no mistake,” he stressed, the levels of drugs allowed in the bill “are drug trafficking quantities” for sale and distribution.

“To reduce the penalties sends absolutely the wrong message,” Bryfonski said.
All counties in the state except Sullivan have drug courts and they are routinely looking to divert first-time offenders from criminal prosecution, he said.

Lescaze said there is hope that we can endeavor to treat, rather than criminalize drug use, particularly among those who have not had a prior experience with the criminal justice system.

Jake Berry, vice president of policy at New Futures, spoke in strong support of the bill. He said it would reduce recidivism and taxpayer dollars spent on needless incarceration.

House Bill 108 would require that for meetings in non-public sessions where the minutes or decisions were determined to be exempt from public disclosure, a list shall be kept and available for public disclosure. The bill is related to RSA 91-A:3, the state’s right-to-know law, which holds that the public has a right to know the decisions made by their elected leaders, with certain exceptions.

State Rep. Jordan Ulery, R-Hudson, is a sponsor of the bill which passed the House on a voice vote on April 7.

Several Senators, including Committee Chair Sharon Carson, R-Londonderry, and Harold French, R-Franklin, said the bill would require towns or cities to keep a list and add to their paperwork.

Sen. Jay Kahn, D-Keene, said many such situations end up in court especially ones with non-disclosure agreements.

The bill does not change what is or not allowed to be discussed in non-public sessions and public bodies still have to comply with RSA 91-A.

French said the bill might be burdensome to communities.
Carson said she wanted to be sure she understood: “We already make this information available to the public, right?”

She was told, yes the public is told if a public body is going to seal the minutes, but the information is not now on a list.

House Bill 178-FN, an act for parole procedures was also heard. Former House Speaker Donna Sytek, now serving in her 10th year as a member of the state Adult Parole Board, testified in support of the bill that is intended to improve public safety and transition to the community for inmates.

She said the bill is in response to an audit and will ensure efficiency. It is similar to one offered last year that did not pass in part due to the pandemic.

Some inmates prefer to opt-out of parole and just max out their time, leaving prison with no plan and the state with few control measures to keep tabs on them.

One section of the bill relates to recommittal conditions, which are for 90 days, and adds that those recommitted for violations need to meet the same criteria as for parole. For example, they would need to have housing rather than just be released to the street and the state would not know where they were going, Sytek said.

“We would like them to meet the criteria as everyone else” who is paroled, she said. “That is the most important part of the bill.”

The bill also ensures that the public has access to parole hearings and Sytek noted they are available now on Zoom twice a week.
Seven people signed up in support of the bill and there was no opposition.

A bill would change the statute of limitations on first-degree and second-degree assault charges against children.
House Bill 239-FN, http://gencourt.state.nh.us/bill_status/billText.aspx?sy=2021&id=183&txtFormat=html sponsored by state Rep. Max Abramson, R-Seabrook, extends the statute of limitation to age 18 and makes it more consistent with other laws.
He said the “six-year clock” that currently exists does not consider the age of the child at the time of the assault.

“The problem with starting it at the age of the attack is that very young children don’t know who to go to, nor how the process works,” Abramson said. “The clock is running but there isn’t a realistic opportunity for the victim to come forward.”

He said there could be a deterrent effect on would-be predators, knowing there is a longer period of time for the children to come forward.
There were no opponents speaking against the bill.

Another bill House Bill 296-FN http://gencourt.state.nh.us/bill_status/billText.aspx?sy=2021&id=448&txtFormat=html would make it a crime for people to send unsolicited photos of genitals to adults. It is already a crime to send them to children.

State Rep. Allison Nutting-Wong, D-Nashua, sponsor, who called it “cyber flashing,” said the bill would make the penalty a $1,000 fine.
She said she has received such unsolicited images and the “goal is harassment” in the majority of such cases. There were 39 who wrote in support the bill and none in opposition.