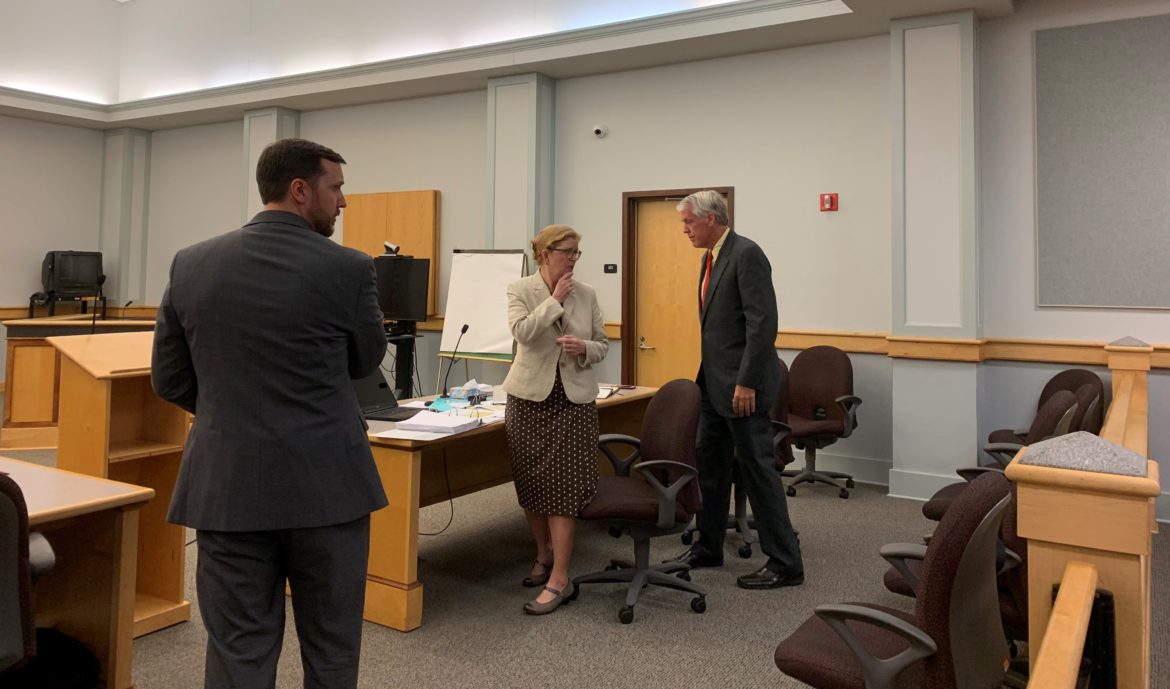 The Littleton mental health counselor who is the only defense witness for former state Senator Jeff Woodburn’s upcoming trial on domestic violence charges said allegations that prompted him to surrender his license to practice recently were false or distorted, intended to damage his credibility and derail Woodburn’s defense.

Dr. Paul Donahue, who had counselled Woodburn and his former fiancée Emily Jacobs as a couple and as individuals before they split, said it was clear at a hearing with the Board of Mental Health Practice June 12, 2020, that he was not believed and Woodburn’s accuser, who wasn’t present but had filed the complaint, was believed.

Woodburn of Whitefield was arrested in August of 2018, charged with nine class A misdemeanors and is scheduled for trial May 12.

Many of the questions Donahue was asked at the June 12, 2020 hearing related to Woodburn’s criminal case, Donahue said, not his actions as their counselor.

“The charges as printed are either distorted or false,” Donahue said of the Board of Mental Health Practice’s findings. “This thing was done to damage me. It’s not like I had history of complaints or breaking confidentiality. This is the one complaint over 40 years.”

“It would have been prudent to separate the issues,” Donahue said. “The intention was to discredit me as a professional.”

Donahue said prosecutors were not able to get Woodburn to plead guilty in the case so they went after him because he is the only defense witness, a charge Strelzin also denied.

One issue is a phone message Donahue left on Woodburn’s answer machine July 3, 2018 indicating his accuser wanted to “get back at” him for leaving her, according to a motion filed in Coos County Superior Court by Woodburn’s attorney Donna Brown. Attempts to reach Jacobs and her attorney were not successful.

The Board of Mental Health Practice found that “(Donahue) failed to maintain objectivity in the couple’s counseling relationship; provided false information during the investigation regarding record keeping practices and whether one of the clients reported being afraid of the other client; and shared information from one client with the other client that could have put the disclosing client in danger given the temper, anger, and physical abuse allegations that she previously shared during her individual sessions.” The Board listed a number of other misconduct allegations in the case that Donahue agreed to settle by voluntarily surrendering his license to practice on March 16.

The motion Brown filed in September of 2018 included transcripts of emails and the voice mail from Donahue to Woodburn.

“Yeah, I met with Emily. It was very discouraging. Very.  Seems confused about what she wants to do, but overall on the negative side…how to get back at you. I urged her to think about things before she did anything and exactly what she has in mind is hard to say, but if I were you as I said face to face, I would proceed with caution …,” the motion quoted Donahue’s message.

On Monday responding to Donahue’s allegations, Strelzin said the meeting on June 12, 2020 with Donahue was not a hearing but an interview. Donahue agreed to go to the Attorney General’s Office to be interviewed about the Board of Mental Health Practice allegation, Strelzin said. But Donahue said the 3 ½ hour interview was called a hearing and resulted in discipline against him.

“Typically, you would have two separate interviews,” Strelzin said. “He’s a potential witness or has information in a criminal matter, that would be handled separately from the administrative matter. But if the two issues overlap then it could be possible that questions in the administrative matter could also cross over in any potential criminal claims because if they are intertwined you may not be able to ask questions without that answer concerning both.”

Strelzin denied Donahue’s allegations, including that the civil complaint against Donahue and criminal case against Woodburn were co-mingled, or that Donahue was pressured in any way.

“The only pressure that would have been on (Donahue) would have been to answer truthfully,” Strelzin said. “Again, he chose not go to a hearing and contest the allegations.”

Donahue said he would waive his right to confidentiality and allow InDepthNH.org to read the transcript of the June 12, 2020 hearing to determine what was said and who was present.

Strelzin said there is no transcript of the interview. It was audiotaped.

“Further, pursuant to RSA 330-A:28 I, that audio is ‘exempt from the public disclosure provisions of RSA 91-a.’ Accordingly no copy can be released to you,” Strelzin wrote in an email Wednesday.

Donahue said he agreed to voluntarily surrender his license to practice because it would have been too expensive to fight the charges or comply with any order by the Board that someone oversee his practice.

“I was hoping to let sleeping dogs lie,” Donahue said. At age 72, he needs to be cautious how he spends money, he said.

Donahue said all of his other patients have stuck by him and he continues to see them as a life coach rather than a licensed therapist.

But he decided to speak out after the Board allegations against him hit the newspapers two weeks ago because he believes his license surrender document had to be leaked to a reporter, although he wouldn’t speculate who may have done so.

“I’ve got children, grandchildren and friends and from an unbiased eye, it makes me look like a scum bag. That isn’t good. More than that it was an attempt to hurt a person and make me look bad,” Donahue said.

Donahue is looking to Woodburn’s trial to get the truth out. He declined to discuss the case in more detail because of the trial.

“Many people have called me about it. The story makes me looks like a bad guy. I had nothing to do with allegations,” Donahue said. “I hope I am called as a witness.”

If a patient makes a direct threat against a person place or thing, a therapist has a duty to warn, Donahue added.

“It’s not enough to call the cops; in case law you have to try reach the person,” Donahue said.

Woodburn and his attorney Brown did not return calls seeking comment.

Donahue did say it was unusual to co-mingle a civil investigation of the Board of Mental Health Practice with someone else’s criminal investigation. After serving as a state’s witness in 2,000 to 3,000 cases over the years, Donahue said: “I had never heard of this happening.”

The Board could have settled with him earlier or waited until the trial was over “so there wouldn’t be any contamination,” Donahue said.

“Looking back on the whole thing, the biggest mistake I made? As a psychiatrist or psychologist, you have to tell early on whether can you help them or not,” Donahue said.

Instead of referring Woodburn and his accuser to some other therapist, he decided to treat them.

“I decided unwisely to hang in there and try to get them through it. I thought maybe I can help keep them from harming each other,” Donahue said.

Donahue believes he acted professionally for the last 40 years.

“I’m willing to take the heat. It’s part of the business. I think I’ve done a professional job and been effective in private practice since 1980,” Donahue said.