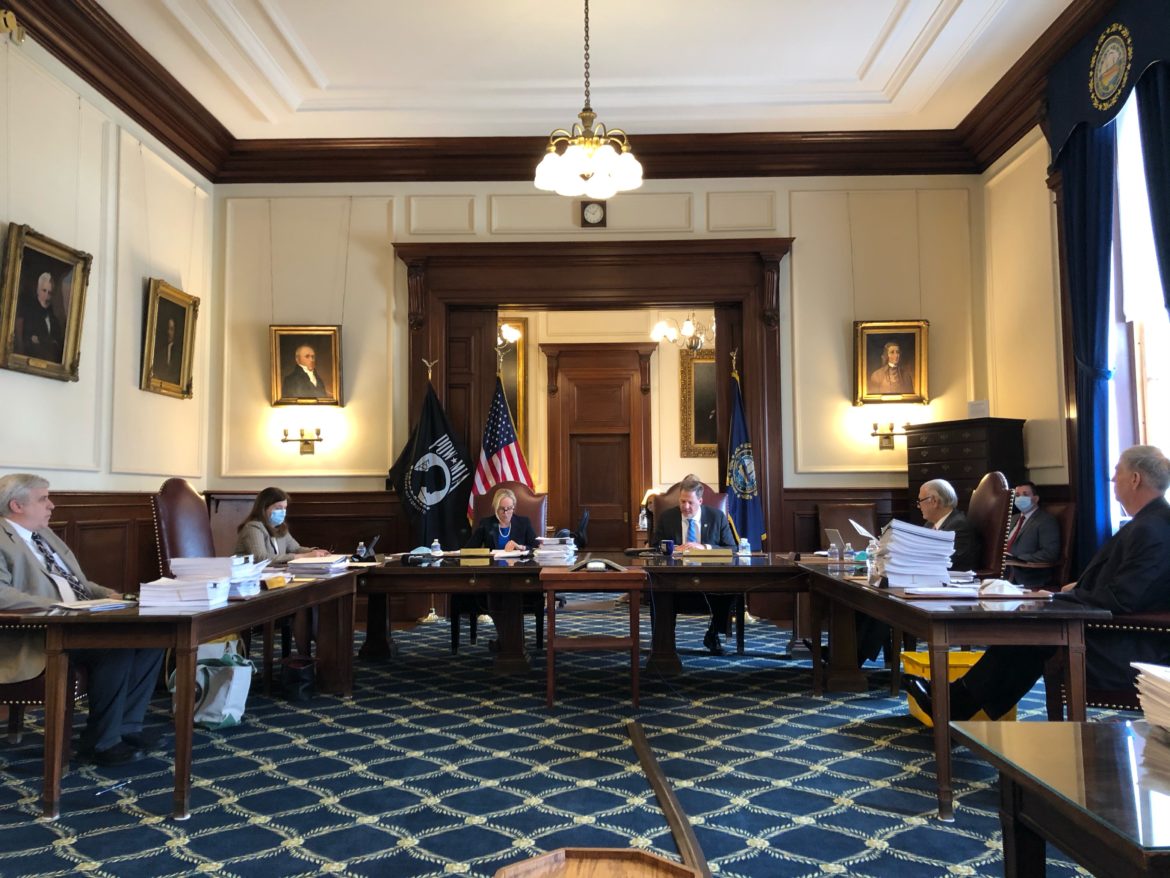 The Governor and Executive Council met in Council Chambers in April at the State House.

CONCORD – Expect fewer COVID-19 vaccines to enter the state next week than had been anticipated, Gov. Chris Sununu told Executive Councilors at their Wednesday meeting, but do expect Fourth of July parades across the state and other summer festivities to resume.

Sununu said he was just told by the Biden Administration that the expected number of doses of the vaccines for the state would be down next week but he did not give specific numbers.

Still, he maintains the rollout of COVID-19 vaccines is going ahead of the predicted schedule and noted that there is hope that 12,000 more of the state’s 1.3 million citizens will be able to receive the single Johnson & Johnson dose of the vaccine this weekend at the New Hampshire International Speedway in Loudon.

As of Wednesday, the state reported that 18.4 percent of its residents have been fully vaccinated, or 249,890, and that in the past seven days, 41,660 received their first shot while 22,069 received their second and final shot.
The state, like all others, is given vaccinations on a weekly basis based on a percentage of their population.

Strike Up the Band

Executive Councilor Joseph Kenney, who represents the northern half of the state, asked for his constituents in Wolfeboro and Conway if Fourth of July parades would still go on.

The governor said yes, that he thought the state would be moving rapidly toward reopening by that point.

“I’m going to have a Fourth of July parade,” the governor joked but noted, he expected “few, if any restrictions,” by that time.

“We’re going at this so fast, that is why I feel so confident,” Sununu said. He said those who are planning for such summer festivities including festivals and fairs should have a great amount of confidence that they will occur.

William T. Conway of Concord was nominated as the assistant commissioner of the Department of Corrections by Sununu.
If confirmed by the Executive Council, Conway will assume the position following the resignation of Benjamin Jean of Nottingham and will earn $131,357 annually.

Beth Kissinger of Hopkinton was nominated as a Circuit Court justice by Sununu and Daniel Goldner of Manchester was nominated to the Public Utilities Commission, succeeding Michael Giaimo who resigned.

At the request of Councilor Kenney, Health and Human Services officials gave an overview of some of the department’s most pressing issues right now.

Addressing the needs of families and businesses who rely on workers to have childcare was the first discussion.

There are 45,000 children in the state in licensed child care. Chris Santaniello, director of the Division of Economic and Housing Stability within the Health and Human Services Department, and Lori Shibinette, the commissioner, said child care is something that is critically important but we don’t often talk about it.

“One of the silver linings of COVID-19 is that people are talking about child care,” Shibinette.

The state considered child care an essential service and never shut it down while other states did and they found a cascading effect and have been having a harder time recovering.

The state just received $20 million to help child care from the federal COVID-19 relief plans and is entertaining grant requests from more than 500 facilities as well as working with businesses and other partners to reconfigure what child care will look like in the future.

They talked about the low wages of child care workers and about an untapped workforce and how that could be opened up with better child care options that are more economical.

The state has formed the Childcare Collaborative with other states to get ideas and supplies and child care is now moving toward the stabilization phase in the recovery from the pandemic, Santaniello said.
“It was fragile system pre-pandemic,” she said. Now it has a chance to build back better.

The pandemic released $65 million to stabilize this industry, she noted, and through leveraging services, philanthropy, and new ideas the system is improving.

Executive Councilor Cinde Warmington of Concord said it is wonderful that the state is thinking about child care and how to improve it and noted a “huge pot of money” coming to help families thanks to the state’s congressional delegation.

Sununu said the focus is on how to partner with businesses to keep costs go down and think of it differently to incentivize care.
Councilor Kenney noted that people are being disincentivized to work because they continue to get federal unemployment benefits.

Donnalee Lozeau, executive director for Southern NH Community Services, one of the largest childcare providers in the state, addressed the Council by phone.

She said staffing is certainly an issue and the affordability of childcare is a challenge.

The other main issue the Council heard about was the mental health crisis in the state with both adults and children waiting in hospital emergency rooms to receive inpatient mental health care.

Katya Fox of the Department of Health and Human Services, said the problem goes back decades as the state incrementally lost group homes and hospital beds and it will take time for it to be built back up.
The pandemic has exacerbated the problem particularly for children but she noted that as of Wednesday, there were five children waiting for placement, rather than a high during the past year of as many as 49 waiting.

She theorized that the situation may be improving because schools are back open now and children have an opportunity to interact with peers and school professionals. But the state still faces discharge barriers with not enough community-based placement opportunities.

The Council approved a $10.8 million contract to perform a final design for Londonderry and Derry at Route 102 by constructing a new interchange for Exit 4A of Interstate 93, approximately one mile north of Exit 4 and a new connector road.

Executive Councilor Ted Gatsas of Manchester told Commissioner of Transportation Victoria Sheehan that the state is still moving too slowly on this major road expansion project.