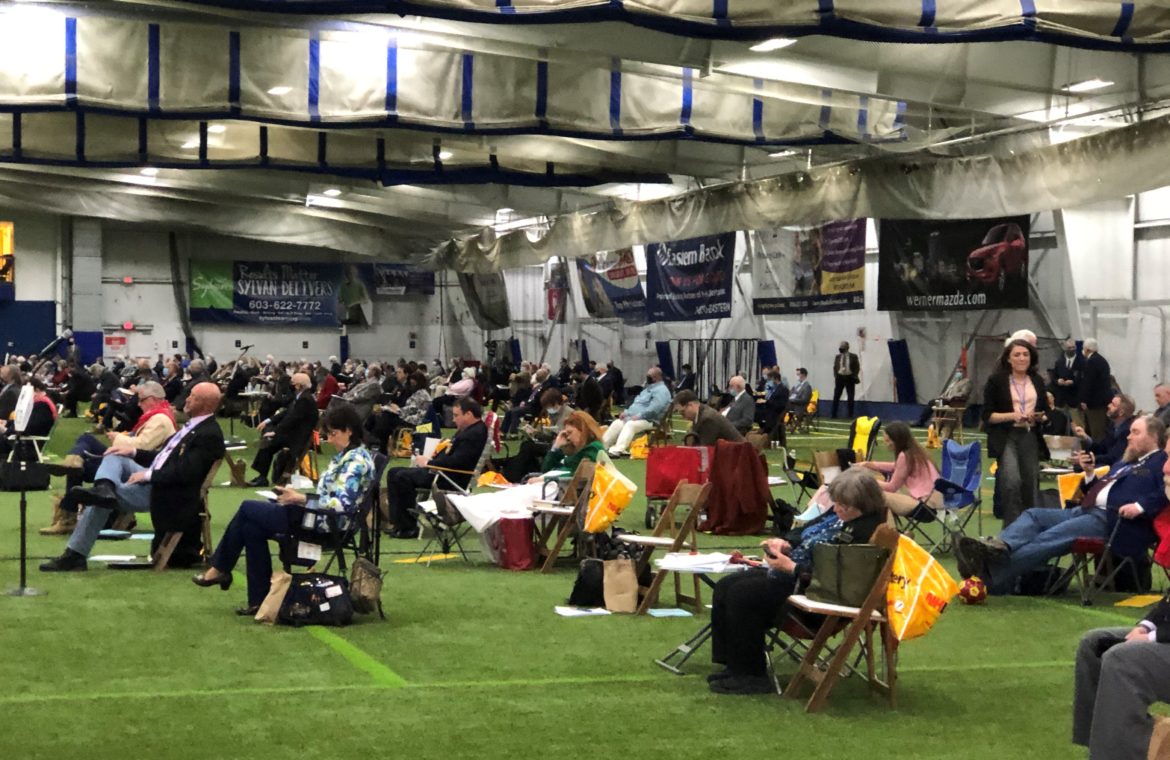 The budget package cuts a number of taxes, creates a new department, closes the youth detention center, and cuts hundreds of positions in the Health and Human Services Department while level funding higher education for the next two years, and adding millions for nursing homes to avoid a spike in county property taxes.

The budget also contains a number of controversial policy issues that supporters defended but Democrats said do not belong in the budget and are an end run around policy committees.

Debate on the budget lasted for more than five hours as Democrats tried unsuccessfully to overturn more than a dozen budget provisions and to add millions more to programs.

But Republicans held their ground and defeated every attempt to amend the bills the House Finance Committee approved last week down party lines, 12-9 votes.

Supporters said the proposed budget lives within it means while providing essential services and reducing the unsustainable spending in the current biennial plan.

“As families across the state have tightened their belts,” said House Majority Leader Jason Osborne, R-Auburn, “the state must do the same.”
But Democrats opposed the budget package saying it downshifts millions of dollars in costs to local and county property taxpayers and fails to meet critical needs like adult dental care, child protection and at-risk family services.

While the House debated the budget package for over five hours, it spent little time on a $127.55 million general fund capital budget that passed on a voice vote and without debate.

Total spending including federal and other funds in the capital budget is $342.9 million.

But the debate on the operating budget ranged from underfunding public schools by nearly $100 million to including policies Democrats said should not be part of the package.

The longest and most contentious debate concerned a provision to prohibit including “divisive concepts related to sex and race in state contracts, grants, and training programs.”

Opponents of the provision said it is likely unconstitutional and would prevent teachers and others from discussing issues the country faces today like racism.

“No law can cure the problem of racism,” said Rep. Sallie Fellows, D-Holderness, noting the only way to cure racism and all bias is through education.

“We need more dialogue not less. . . . We need to talk about racism,” Fellows said. “Unless we talk about how our behavior and policies impact minorities, racism will continue.”

But supporters argued the bill is not unconstitutional and does not inhibit first amendment rights.

Former state Supreme Court Chief Justice now Rep. Bob Lynn, R-Windham, said the bill would not do what opponents claim it will.

“This bill will not infringe on anyone’s First Amendment freedoms,” he said. “This regulates what someone can say in speaking officially, you can advocate on your own time.”

To believe some teacher would be able to advocate for the KKK without some repercussions from the legislature or school board is preposterous, he said.

But he noted there is no question the bill will be challenged in court.

Rep. Jean Jeudy, D-Manchester, said the provision is the direct result of a dangerous executive order from former President Trump to restrict the free speech of private businesses, teachers, and government agencies from merely acknowledging the existence of discrimination in our society.

“This legislation is an affront to democracy and to the safety of our society for marginalized people. House Republicans have demonstrated that they will stop at nothing to ignore diversity and even actively suppress it by trying to ram through this evil legislation in the budget,” he said. “If you spent a day in my shoes you would know why it is so important to educate people about racism.”

The attempt to remove the section from House Bill 2 failed on a 193-186 vote but the House voted 303-78 to include the debate in the permanent journal.

Democrats also failed to remove sections that curtailed the governor’s authority to continue a declaration of a state of emergency without legislative consent and requiring a privacy review for a new patient information system for the DHHS.

Democrats also tried to use $100 million in general fund money to reduce the statewide education property tax in the second year of the biennium to help property poor communities, and they attempted to add additional money for school districts to ensure they will receive the same state education aid they did this school year.

Other amendments would have removed a requirement for a provider to physically and financially separate family planning services from abortion services, as well as the new Department of Energy.

And they objected to including $10 million in the budget for Financial Resource Management investors who were victims of a multi-million dollar Ponzi scheme, saying never before has the legislature approved taxpayers’ money to reimburse reckless investors who did not do their own due diligence, while supporters said state regulators fell down on the job and the state has a responsibility to help the victims.

Democrats also failed to raise the fee paid to hospitality businesses to collect the rooms and meals tax from 3 to 4 percent, and failed to add $15 million in pollution control grants for cities and towns the finance committee removed from the budget.

The House proposed budget would cut hundreds of positions in the Department of Health and Human Services, saving $22.6 million, and a back-of-the-budget cut of $50 million for the agency.

“The hypocrisy of massive cuts to funding and jobs in the name of ‘tightening our belt’ and handing out $10 million of public money to private citizens who voluntarily took risky investments is mind boggling,” said Rep. MaryJane Wallner, D-Concord, and the ranking Democrat on the House Finance Committee. “Recovering from a global pandemic is not the time to be saving for a rainy day,’” she said referring to the $35 million the budget would allocate to the state’s rainy day fund.

“We were able to craft a well-thought out budget that is balanced, fiscally responsible, and does not raise any tax or fee,” he said. “Our recommended House budget brings a broad range of tax relief to NH families, businesses, retirees and consumers.”

The budget package now goes to the Senate, where its finance committee has already scheduled hearings next week.