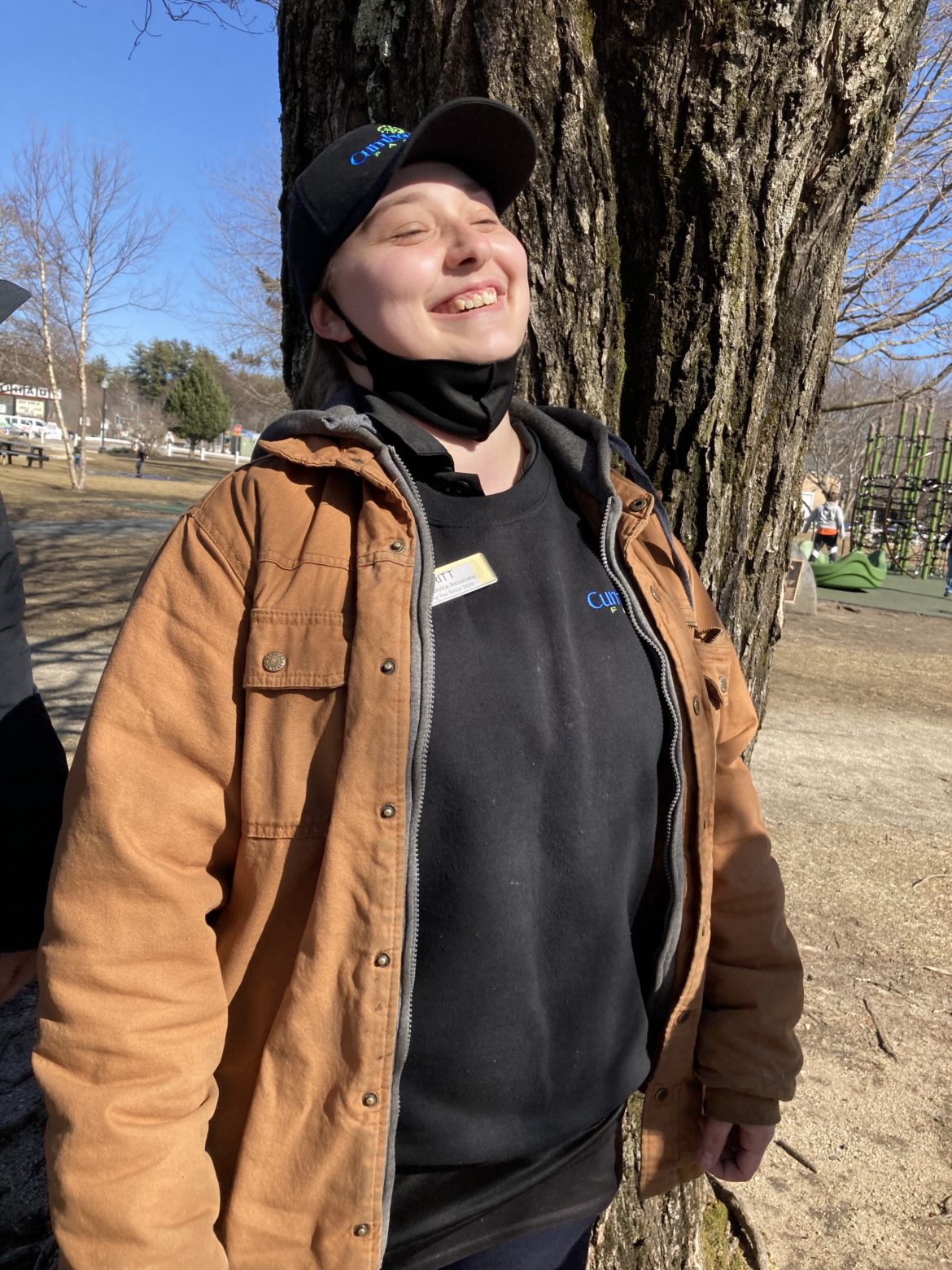 Brittany Hall has an apartment in Rochester, a job, and a Chinese dwarf hamster named Peanuts her cousin gave her.

She was the second youth in New Hampshire to find temporary housing through a new program at Waypoint, a nonprofit formerly called Child and Family Services.

It was 2019. That year Hall met Amy Malone, a case manager with the new program called Rapid Rehousing. They met on the Commons in Rochester. It would be fall soon and Hall had already felt the cold blowing in through the tent she and her partner slept in.

She remembers she’d been sitting at the picnic table at the far end of the Commons, the opposite end from the gazebo. The meeting with Malone changed her life.

Hall had been living and sleeping outside all that summer in Farmington.  Her partner was homeless and when there was no room for him at her mom’s house, she left to live outside with him.  She hadn’t quite finished high school.

“I wanted to try and experience how my father did it,” she said. “Cause my father was homeless on the streets for a while. I thought since my father’s no longer here, maybe I could try.”

Hall slept in the dugouts of a baseball field in Farmington even though her partner said to watch out for a man who stayed in a shed there and he had a gun. She ate Cheerios and vegetables they got from the Kindness Cabinet, an actual outdoor cabinet stocked with food by Farmington community members.

They got hot meals at Rochester Fellowship Kitchen at the First United Methodist Church. Hall survived but it was really hard.

“The hardest part was finding a place where it felt safe and make sure no one comes in your tent and tries to steal your stuff.” At night in the dark, she checked the perimeter of where they set up to assure herself no one was there. “There are addicts,” she said who would steal her things to sell them. She always carried some of her father’s things with her.

“They could take my stuff but not my father’s. Things of my father’s meant the world to me.”

Hall’s housing had been unstable before. When she was in high school her guidance counselor at Spaulding High connected her to Waypoint and she received some services then.

Erin Kelly, Waypoint Director of Youth Services, described how they work with homeless youths: “We walk beside them. Some pull themselves together. Some might access a program. They direct their path.”

Kelly said that homeless youths are often invisible. “They’re not on street corners. They blend in.”  She estimates there are 15,000 homeless youths in New Hampshire based on Chapin Hall research at the University of Chicago.  “1 in 10 young adults ages 18 to 25 experience homelessness and 1 in 30 adolescents 13 – 17 experience homelessness each year.” These are youths unaccompanied by a parent or guardian.

Waypoint serves approximately 1,500 youths.  There are no specific programs for homeless youths in the state besides Waypoint and Kelly said it’s important that youths get help separately from homeless adults.   Sleeping in the street, in shelters, running away, being kicked out, and couch surfing and all kinds of homelessness, though couch surfing hasn’t been an opportunity during the pandemic.

Researchers at Chapin Hall report that, “Youth with less than a high school diploma [or equivalency] had a 346% higher risk of experiencing homelessness.”  Being unmarried and parenting, being poor, being LGBTQ, all add to the risk for a youth to become homeless.  During the pandemic when schools went online, Kelly said, “15% of students disappeared.” It’s school staff that often make the direct referral to Waypoint; that number is concerning because it reflects youth at risk who haven’t been identified.

Hall’s case manager Amy Malone said, “It’s good that we’re early working with Britt. So when she’s in her 30s, 40s, or 50s she’s not back in the same place. The skills can get built now [through Waypoint mentoring and counseling]. How to keep a good credit score.  How to be a good tenant.”  Basic life skills.

“That’s why we do this work, right?” Kelly said. “We want to intervene at this point because it is prevention.”

Taylor Purcell is an intern with Waypoint. She’s an undergraduate studying social work at the University of New Hampshire.  Purcell helped Hall out with with various tasks. She said, “If someone is overwhelmed with cleaning, I clean with them. I help them get food stamps. Or with setting up wifi.”

One day Purcell helped Hall arrange her dishes in the kitchen. Hall said that small act started to change things for her even though she’d had an apartment since 2019. She’d always had jobs, but in 2021 she got a new job at Cumberland Farms.   After she got the new job and after “Taylor helped me with those dishes” she began to settle, and she threw away her homeless clothes.

“It takes a while for a young person to feel secure once they’ve been outside,” Malone said. She had a client once who pitched a tent on the floor in his new apartment. “It was like he was waiting for the other shoe to drop” and someone would come soon and evict him.

Hall’s rent assistance with Waypoint ends after 24 months; that would be this coming September.  She said, “I feel a little scared.” She doesn’t earn enough at Cumberland Farms to afford to take on the rent.  The wait list for affordable housing is longer than 24 months with extremely low stock.

But she has dreams.  She wants to reconnect with Spaulding High and finish her high school diploma.  She wants to get her driver’s license.  She loves animals and she and Malone laugh about her hamster Peanuts being her emotional support hamster.

Hall loves to draw.  “From my Dad,” she said, “I learned how to draw hearts on fire.”

People across New Hampshire will sleep out the night of March 26 in support of Waypoint’s Homelessness Youth and Young Adult Services.

“The SleepOut is a night spent out in the cold to raise community consciousness and critical funds that will transform the lives of homeless youth and get another step closer to ending youth homelessness in NH. In 2021, in light of the pandemic, we will conduct a socially-distanced SleepOut, online. You can sign up to sleep out or support someone who is.”