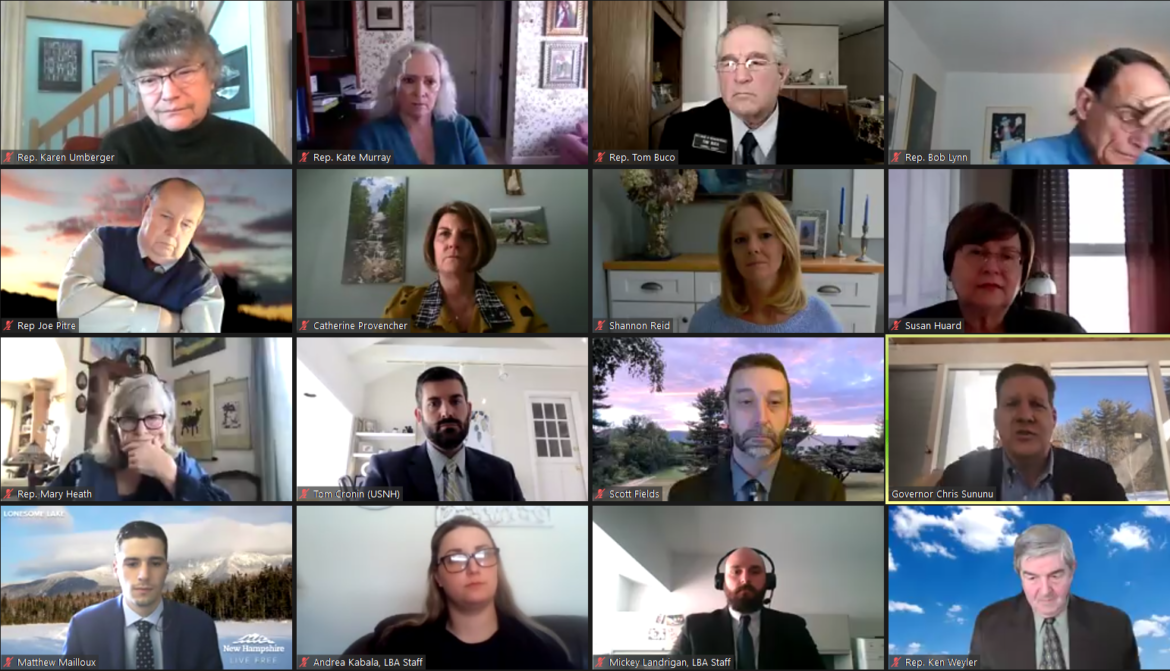 The board would take over governing the two systems July 1 and members would have to be approved by the Governor and Executive Council.

The board of trustees would have until the end of the year to develop and design the merged system and would present a plan to the Legislature next year.

“This is all about evolving the two systems so they don’t get crushed,” Sununu said, noting the pandemic has accelerated the changes everyone knows have to happen.

Before Sununu made his presentation, leaders from the two systems asked lawmakers to at least level fund their systems for the next fiscal year in order to maintain their programs.

Both systems said they are making significant changes to reach fiscal sustainability as the potential number of students decreases and financial aid needs grow.

Sununu said he did not want to predetermine what a merged system would be, but noted other states have merged their higher education systems and others are contemplating it.

Some of the mergers have worked well and some mistakes have been made, Sununu noted.

While both systems’  boards of trustees have indicated support for the concept, the community college system’s board wants much more information about the potential merger.

Since Christmas the talks have intensified, she said, but her board wants more information and has many questions.

“The desire is not to not change, but what do we see in other states,” Huard said, noting Connecticut has been trying to merge its higher education systems since 2011.

“When we look at other mergers that have happened,” she said, “the first voice that goes away is the community colleges’.”

She said more voices need to be heard, from students, faculty, staff, and from the businesses that partner with the institutions.

Huard said the system needs to be flexible to provide for workforce needs, and to be affordable so it is accessible to more people, many who are retraining for another career.

Several members of the committee also expressed concerns the community system would be consumed by the larger university system and they did not want that to happen.

“I’m in a quandary,” said House Finance Committee Chair Ken Weyler, R-Kingston, “If we combine them, is UNH still going to take the biggest share and the community colleges will feel left out?”

He also suggested it might be wise to slow down the implementation of the merger a little to make sure it is done right.

Sununu noted he gave the two systems the same amount of money they received this fiscal year in 2022, so nothing would change until the second year of the next biennium.

Once the two systems are brought together, it will not be UNH versus the community colleges, but one singular system with a chancellor making sure all 11 parts are moving, Sununu said referring to the 11 institutions of the two systems.

Sununu envisions a seamless system that would allow a student entering Nashua Community College to access courses at the other 10 institutions to achieve his or her goals.

“If you are a higher education student in New Hampshire,” he said, “you get the golden ticket to everything, not siloing.”

The current system is archaic and difficult for students to take courses beyond their college, he said.

Sununu also called the current higher education billing system archaic, noting there has to be a way to make it more affordable for students.

“There’s been a lot of talk about yesterday,” Sununu said, “we have to move on from that.”

He noted the new system would need a CEO rather than a chancellor. “It’s all the same business, the same company, the same opportunities for students, that’s the product,” he said.

But he said all 11 institutions would retain their “brand,” but it would all be available for students to access. You can’t keep pumping dollars into the same old system and be a success, he said, you have to evolve.

With declining enrollments, everyone expected the change to come in five to 10 years, Sununu said, but the COVID-19 pandemic accelerated the process.

“The benefits I think is you will save some money, but I don’t care about that.” Sununu said, “I want to create a pathway for the students. It’s really about options and a smooth transition.”

He said the way the system works now is “massively inefficient and a rougher pathway” for students.

“I view this as school choice for higher education,” Sununu said.

Representatives from both systems warned the committee much work remains to be done to merge the two systems and both institutions need to continue meeting their missions.

Those are the kinds of technology needs that have to be addressed across all colleges and universities for the merger, she said.

Committee member Rep. Kate Murray, D-New Castle, said there are other things to consider about the merger, it is not just a matter of putting two boards together, cutting it in half and then you are done.

“There is a lot more to consider,” she said, “there are optics involved.”

“It was an absolute public relations disaster,” Murray said, noting students are looking at what they will experience and if they want to attend.

“You need more than two lines in a budget to be successful,” she said.

The governor’s budget director Mathew Mailloux said that has already happened, noting there have been conversations with both systems, so the next logical step is to combine the governing structure and then identify the next steps to take.

That is why the governor is not proposing to make major changes in the first year of the biennium and do more in the second year, he said.

Provencher said the university systems board is unwavering in its decision to move forward, but recognizes there is much work and thought that needs to go into the merger.

Huard agreed, saying there is much more work to do, and said it may not be the tidal wave Mailloux described but it is an emergency.

“Let’s look at the successes and learn what other places have done and go on,” she said.

Committee member Rep. Mary Heath, D-Manchester, said she was at Southern New Hampshire University when it made the decision to begin the transition to more online courses.

There was a great deal of planning and a tremendous investment put in, she said.

“It takes a lot of work and you want to do it right,” Heath said. “Without that effort, we will do more harm than good.”