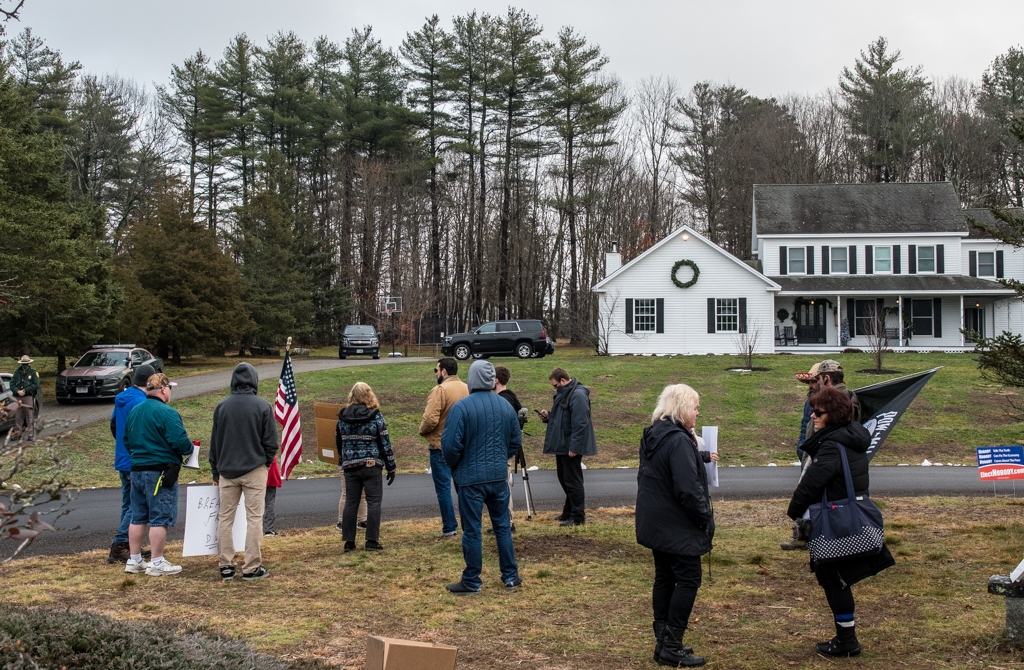 Dec. 13 photo of picketers in front of Gov. Chris Sununu's home in Newfields.

My name is Brennan Christen. I’m reaching out to counter what I see as deliberately misleading comments made by Governor Sununu to paint the demonstrators at his residence as something that they are not. As one of the organizers of “Absolute Defiance”, the group leading the peaceful demonstrations at Governor Sununu’s house, I feel obligated to ensure that the truth of the situation is made clear, and to let people know that we have photo and video evidence from multiple attendees, as well as eye witnesses who can refute the Governor’s recent comments about the protests near his house.

First, the Governor stated today “For weeks, armed protesters have increasingly become more aggressive, targeting my family, protesting outside my private residence and trespassing on my property” This comment is patently false. On Monday, December 28th around 7 pm, members of Absolute Defiance arrived at the cul de sac near the Governor’s property. The intent of the vigil attendees was to avoid violating the picketing ordinance by holding a silent vigil to remember those who have died from overdoses and other deaths of despair during the pandemic. This quickly was shot down by state and local police on the scene, who immediately declared that anyone standing in a small park in the middle of the cul de sac in the Governor’s neighborhood would be fined under the Town of Newfields new picketing ordinance, an ordinance pushed in part by the Governor’s brother, Michael Sununu.

Those attending the vigil then asked if they could march instead, in order to avoid violating the picketing ordinance. The police agreed to let them march, and confirmed that those present could walk around the neighborhood, as well as along a paved public walking path that abuts Governor Sununu’s property. When protestors stopped momentarily on that particular public walkway to wait for an individual who could not keep up with the march, the police seized the moment to fine all demonstrators for violating the picketing ordinance. One individual, Skylar Bennett, started to ask officers for their badge numbers. Skylar at this point, and at all previous times, was standing on the walkway abutting the Governor’s property. Out of the blue, the police arrested Skylar. When asked why he was under arrest, they initially refused to answer.

The Governor also made dubious claims about the protestors being “armed in my backyard”. We feel this is intentionally misleading, as Skylar Bennett was standing on the walkway at all times, and never set foot on the Governor’s property. Additionally, the reference to “armed protestors” we believe is even more misleading, as Absolute Defiance has not only heavily discouraged protestors from bringing firearms, but also has full length videos and news articles with photos of previous protests and gatherings that refute Governor’s claim that participants were “armed”, because no person openly carried a handgun or firearm at any of these protests. Furthermore, Bennett himself was concealed carrying a handgun lawfully on a public walkway that is not considered to be “Sununu’s backyard”.

It is our belief that the Governor was concerned by a massive protest planned by COSNH, Reopen NH, and Absolute Defiance that sought to rally over a thousand people to protest his inauguration. We believe these distortions are a tactic for the Governor to avoid the protest in Concord, and to evade it by holding it at a more private location not accessible to the public.

Finally, I’d like to note: Governor’s Sununu’s claim especially doesn’t pass the smell test because the previous protests had ample press coverage clearly showing that protestors were unarmed. The reporters there, as well as the attendees, took photos of each protest, as well as video. As you can see in WMUR’s footage tonight of a prior protest, none of the attendees were armed. Given our consistent track record, and how the eagerly press would have already covered individuals if they were in fact armed, we think it is obvious at this point how Governor’s Sununu’s comments contradict an evidenced and consistent track record of peaceful, non-violent, law abiding demonstrators on a small park across the street from his house. Organizers have made every effort, and have successfully discouraged any and all “armed protests” to date. I sincerely hope you agree upon reviewing the evidence presented.