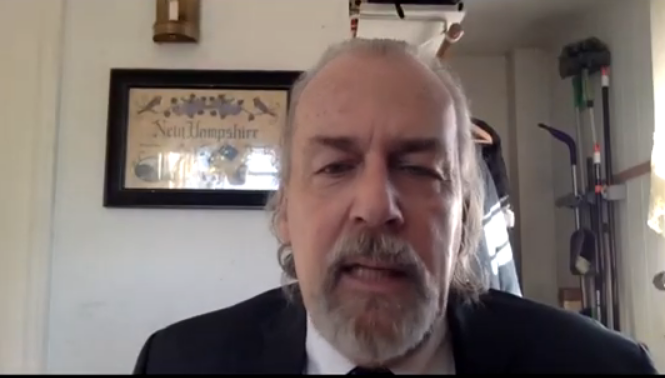 CONCORD – State House Democrats are asking Republican leaders to meet remotely Jan. 6 with secure voting online or a hybrid that would allow those who feel safer at home during the pandemic rather than the “drive-in” plan being promoted by the new majority.

State Rep. Kenneth Snow, D-Manchester, said he did not want to become the “Typhoid Mary” of the Birch Hill retirement community where he lives, and where outside movement due to COVID-19 has limited his ability to go in and out.

Snow, 81, in his fourth term, lives with his handicapped wife, age 79, at the retirement community. He said he does not want anyone to come to his car window with a microphone, which would be shared by other speakers, and likely be closer than six feet.

The House must meet on Jan. 6 to elect a new leader after the sudden death of House Speaker Dick Hinch, one week after he was sworn in at an in-person outdoor Organization Day at a field at UNH where about 80 of the 400 members refused to wear a mask.

The new plan is to meet in a seven-acre parking lot at UNH in Durham in vehicles.

The Republicans met remotely and have tentatively chosen Rep. Sherman A. Packard as their acting Speaker but he still needs to be formally voted on by the full House and rules need to be adopted for the upcoming session.

In the Dec. 18 House Calendar, Packard wrote that the health and safety of the body and its staff is his first priority. Here is his letter to House members: https://indepthnh.org/wp-content/uploads/2020/12/letterpackard.pdf

He said meeting remotely is not allowed by rules and he was not prepared to run an election in a remote meeting or hybrid setting. Packard said keeping legislators in their cars would dramatically reduce or even eliminate the need to interact with each other.

Members of the Democratic House begged to differ, particularly ones with disabilities and or pre-existing conditions that make them more vulnerable to the highly contagious respiratory disease which has killed more than 700 residents so far.

State Rep. Katherine Rogers, D-Concord, who said she suffers from degenerative joint disease and cannot walk without assistance, said the Republican leadership is essentially disenfranchising her constituents by requiring a “drive-in” legislative session, which she cannot attend.

Rogers noted she needs to move about and cannot be in a confined car for a long period of time and that she might need to use the bathroom and be required to ask for assistance, which able-bodied legislators do not have to do.

“It’s unfair. All we are asking for is a safe, reasonable way to represent our constituents,” Rogers said during a virtual press conference Tuesday that was moderated by House Minority Leader Renny Cushing, D-Hampton.

When pressed, Cushing said he would prefer to not have to go to court for reasonable accommodations under the federal Americans with Disabilities Act.

“We are trying to avoid litigation,” Cushing said, “we are still hopeful of a remote option.”

He noted Democrats have a legal team working on the situation and they are “working on options.”

Cushing said he was “flabbergasted” at some assertions that it would cost $300,000 to handle the legislative session online rather than what he considers the cost and effort of having a drive-in style in-person session in a parking lot.

Instead, he said, it would be better for the public to be able to hear what is going on if it were online rather than having to sit on the sidelines of the parking lot.

There are a number of platforms such as Zoom and the secure Vote Buddy application which could make remote voting possible and Cushing noted a state Supreme Court decision that held that it would be OK for legislators to meet and vote remotely during the pandemic.

The House already owns rights to a Zoom system, he said.
David Cote, D-Nashua, the deputy Democratic leader, who has had cerebral palsy since birth and more recently suffers from coronary heart disease, said it would be too risky for him to attend noting his life could be at risk.

State Rep. Susan Almy, D-Lebanon, also noted in the chatbox on Zoom that her fellow Republican legislators may face the same physical constraints and their well-being should be considered as well by leadership.

Some legislators have called disastrous the first attempt at in-person meetings, Organization Day, when as many as 80 of the 400-member house refused to wear masks outdoors on the socially distanced playing field.

He was replaced when Republicans met remotely, Cushing noted, to cast their ballots for Packard. He noted that it “can be done,” and that Democrats have successfully met remotely.

The state Senate will be meeting and voting remotely on the same day, and they will all meet on the lawn of the state house the next day Jan. 7 to swear in Gov. Chris Sununu.