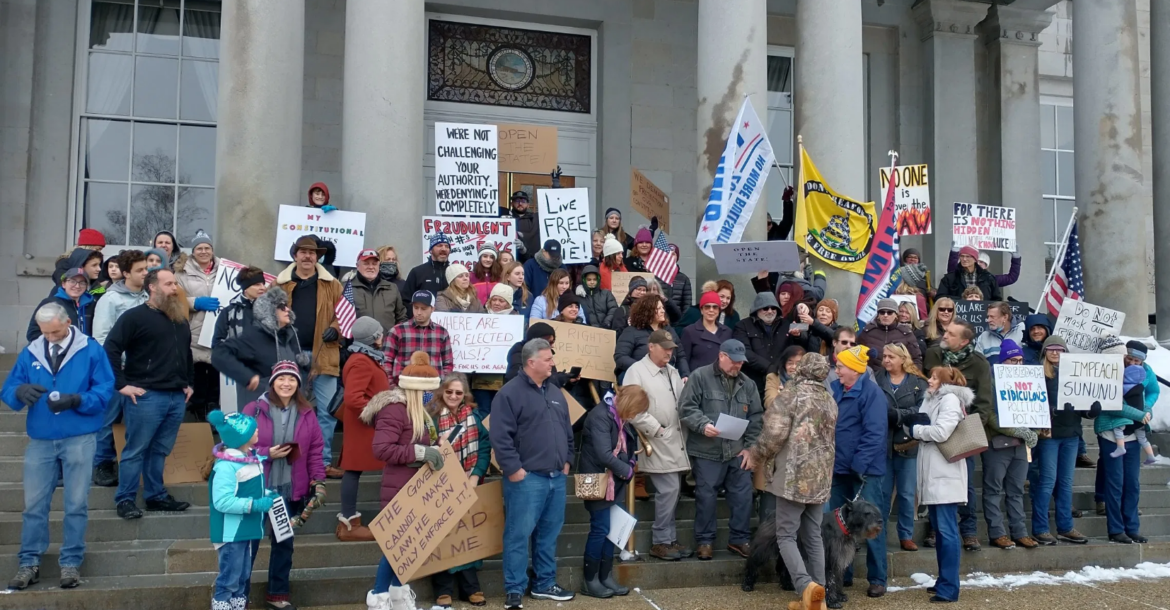 Free Keene photo of group gathered on the State House steps Dec. 21 in support of a Declaration of Independence for New Hampshire against Gov. Chris Sununu's emergency powers and expanded absentee voting during the pandemic.

CONCORD – A half dozen elected state Representatives and about 80 citizens gathered Dec. 21 on the State House steps to support a Declaration of Independence for New Hampshire calling for the “Termination of office and Termination of the ‘state.’”

Most were not wearing masks and many oppose masks and the government shutdown, are disturbed by absentee voter expansion and Gov. Chris Sununu’s emergency power declarations, according to Daniel Richard of Auburn.

Richard has organized the NH Committee of Safety but said those signing the Declaration included an ad hoc group of individuals not affiliated with any one organization.

The November elections are “void for fraud” as are Sununu’s expanded emergency powers due to COVID-19 because both violate the Constitution, Richard said.

“This narrative is all about the rule of law,” Richard said. “The group is predominantly state citizens who woke up to their rights.” He said the Free Staters have reached out to him since the gathering, but he hasn’t heard from anyone in the Liberty Alliance.

Most are Republicans and a few libertarians, according to state Rep. David Testerman, R-Franklin, who along with his wife, Karen Testerman, who ran unsuccessfully against Sununu in the Republican primary, signed the Declaration.

The other Republican House members who signed include Rep. Jose Cambrils of Loudon, Anne Copp of Derry, Scott Wallace of Danville, Raymond Howard of Alton and Michael Sylvia of Belmont, according to a copy of the public notice.

In response to the notice, Democratic Party Chair Ray Buckley asked the legislators: “Where are the resignations.”

Noting that the wording in the Declaration was strong, Testerman said he wasn’t going to resign because the people have elected him to represent them.

The Declaration states as crimes against the people: “Gov. Sununu, AG Gordon MacDonald, Stephen Shurtleff, and Donna Soucy have conspired to commit an illegal election which is repugnant and contrary to both Constitutions.”

As to wearing masks to curb the spread of COVID-19, Richard said: “My position is that they’re the choice of every individual.”

Testerman agreed that House Bill 1266 allowing expanded absentee ballot voting this year because of COVID-19 is unconstitutional. The public notice was filed with Secretary of State Bill Gardner’s office who said he learned about it on Monday. It is not uncommon for people and organizations to file public notices with his office.

“I’m not aware that they are asking this office to do anything,” Gardner said.

Testerman said the group wanted to file with a governmental agency, but had trouble filing with Sununu’s office with the State House being closed to the public. Testerman said the document, which is patterned after the Declaration of Independence, was handed to a State Trooper to give to Sununu.

“We’re trying to put the governor on notice they are operating outside legal and constitutional authority,” Testerman said. “What’s going on with the emergency voting and emergency declarations – they are violating the Constitution.”

The group stirred concern with Democratic House members who are worried about the refusal by some Republicans to wear a mask and the wording of the Declaration.

“I wonder if these legislators will honor their oath to the Constitution as elected officials or their signature on this document. They can’t do both,” said Rep. Marjorie Porter, D-Hillsborough.

“Now they are saying the state of New Hampshire is null and void. They can’t have it both ways.”