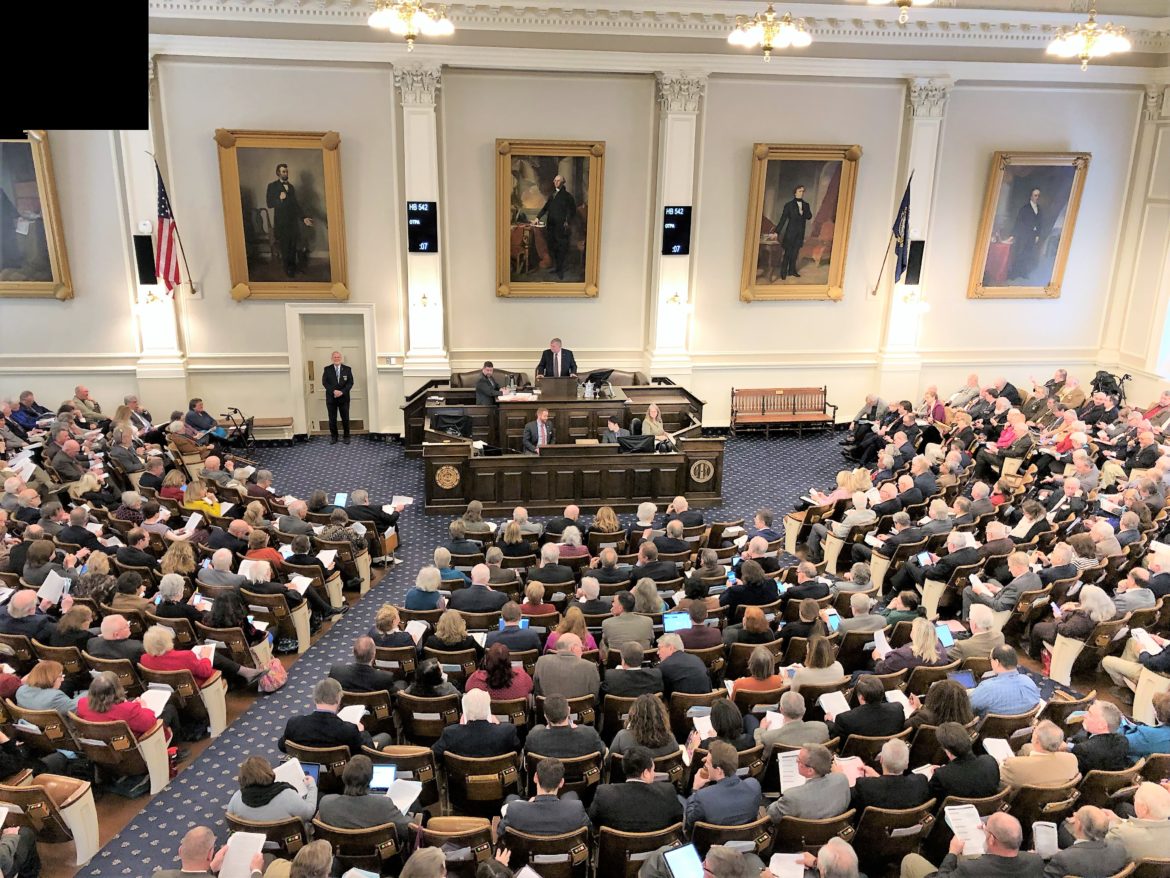 House session in Representatives Hall is pictured on Feb. 28, 2019

CONCORD — There is a new sheriff in town and that was evident at the House Rules Committee meeting Wednesday.

The Republican majority blocked attempts to hold lawmakers accountable for hate speech, to prohibit guns in Representatives Hall, to require training to prevent sexual harassment, unconscious bias, and creating a hostile work environment, and to mandate masks be worn at all House sessions, committee hearings or other gathering of members.

They also voted down several attempts to clarify the House Speaker’s authority to ensure the health and safety of the representatives, staff and the public; to make changes to allow the House to continue to operate in an emergency; to prohibit drinking during House sessions, and to allow committee meetings and sessions to be held remotely with voting.

The House Rules Committee rejected two requests to draft bills after the deadline.

House Minority Leader Renny Cushing, D-Hampton, asked the committee to allow a bill that would include hate speech and other “vile actions” under the prevalence of the Legislative Ethics Committee.

He noted a recent incident involving a representative who “posted a vile, hurtful and dangerous meme on a Facebook page,” that should be handled like other possible ethics violations such as financial misappropriations or misconduct or sexual abuse.

“This was hate speech directed at a vulnerable population,” Cushing said.

Without discussion, the request was rejected down party lines in a 5-4 vote.

Rep. Dawn Johnson, R-Laconia, a newly elected House member and Laconia School Board member posted an article and political cartoon from a Neo-Nazi website on Facebook. Some House members have called for her resignation, and Gov. Chris Sununu called the posting “repugnant and appalling.”

After the vote, one of the co-sponsors of the proposed legislation, Rep. Charlotte Dilorenzo, D-Newmarket, said Republicans doubled down on their refusal to address Johnson’s action during Chanukah, the sacred Jewish holiday.

“It is simply disturbing that Republican leadership chose not to allow the drafting of legislation that would hold elected officials accountable for hate speech. Words matter and votes matter,” Dilorenzo said. “This vote today by Republican leadership is a clear and deeply disappointing denial that Rep. Dawn Johnson, in publicly sharing anti-Semitic cartoons, engaged in harmful behavior.”

The committee also turned down a request by Rep. Melissa Blasek, R-Merrimack, to introduce a House resolution saying the governor’s executive order mandating anyone receiving a COVID-19 vaccination be included in the state’s immunization information data bank is unconstitutional.

Currently residents may opt out of the system, but the Centers for Disease Control, which is paying for the vaccine, requires those receiving it be included in a system that reminds them to have their second shot.

House Majority Leader Jason Osborne, R-Auburn, said he could see the urgency of allowing the resolution to be drafted and introduced. He said the executive order was issued Friday, so it is a matter of timing.

“It’s a resolution, it doesn’t really do anything,” Osborne said. “It’s not really a big deal.”

But Cushing said he did not understand the urgency for the resolution, while not recognizing the urgency when they tried to do something about hate speech.

“I would like to see some consistency,” Cushing said.

Other committee members said they agreed with the resolution on the privacy issue, but believe there are other vehicles being drafted about the governor’s emergency orders that would be more appropriate.

Committee chair and acting House Speaker Sherman Packard, R-Londonderry, said he does not like the personal information in the registry where it could “get out,” but it would be better as part of another bill.

Rep. Lucy Weber, D-Walpole, said a law not a resolution is needed if you are concerned about your personal information going into the registry.

Packard agreed saying he would rather it be in law and would work with the representative to find the proper bill where it could be included.

The nine members voted to reject the drafting request as a resolution.

They also found unanimous agreement to turn down a rule request to allow the Executive Department and Administration, and Finance committees to issue subpoenas.

The proposal by Rep. Josh Yokela, R-Fremont, would be a break from House tradition which requires a vote of the full House and the signature of the Speaker of the House to issue subpoenas.

Yokela said there is great uncertainty with how many session days the House will have this year due to the pandemic while several bills require information that may need to be sealed or is part of an ongoing investigation that might require a subpoena.

He said the two committees would need that information or the bills would likely become study committees to report to the legislature next session.

“That would leave issues unaddressed this year,” Yokela said.

The bills include one to repay those fined for violating the state’s guidance to reopen businesses, as well as where the COVID-19 money has been spent or changes in state policies the legislature did not approve, he said.

Cushing objected to the proposed rule saying the power to issue subpoenas was an “awesome power and should be exercised with great restraint.”

He did not think it should be determined by just the committee even if the vote were unanimous, and instead should involve the entire House.

“This is a bad idea,” Cushing said, and the committee agreed on a 9-0 vote. The last time the House issued subpoenas was during the impeachment investigation into Supreme Court Chief Justice David Brock in 2000.

In a series of 5-4 votes down party lines, the committee rejected several rule proposals from Rep. Marjorie Smith, D-Durham, many that reflected last term’s rules that were rejected two weeks ago at Organization Day in favor of rules adopted for the 2017-2018 legislature.

Smith argued that for years guns were banned from Representatives Hall.  “This was a long-established Republican position until we had a slight break in the action,” she said, noting it was done for the safety of members of the House.

“I am a firm believer I should be able to protect myself no matter where I am,” she said. “At this highly charged political time when people are angry, I am not going to be a sitting duck.”
Former House Speaker Stephen Shurtleff, D-Concord, said the Legislature has excellent security and protection for members and the public.

“I feel the New Hampshire House is no place for firearms,” he said.

Packard noted in the two weeks he has been acting speaker he has gotten two threatening emails.

“I wish both sides could contain the fanatics on both sides or our parties,” he said. “If anything, it makes me want to carry a weapon. I am concerned about how we are moving forward.”

“Until recently I had not thought there was any need to clarify proper decorum,” she said, “but it has become necessary to clarify what is proper decorum.”
The last session day of the House during the 2019-2020 session was held at the University of New Hampshire’s Whittemore Center to allow proper social distancing. At that time, beer cans were found in a trash can near one section where members were sitting.

Then-Speaker Shurtleff called it one of the saddest days he has been in the House, noting it was not the first time empty beer cans were found.

“I have the greatest respect for the institution of the New Hampshire House and the chamber no matter where we meet,” said Shurtleff. “To have members of the New Hampshire House act with less maturity than a fourth grade class visiting the State House amazes me.”
Osborne said he did not want to get dragged into the gutter noting the members did not do anything disrespectful that day, believing it was similar to going to a restaurant or cafe while they had their lunch.

He said the rule was unnecessary.

Committee member Rep. Steve Smith, R-Charlestown, said six or eight years ago, he did some things that brought the Speaker’s involvement.

The Speaker and his staff have a lot of things to do to troublemakers, he said, and he has full confidence the Speaker’s office can deal with situations as they arise even if it is not covered under House rules.

Last session’s rules required all House members to participate in sexual harassment training. At one point seven Republican members were reprimanded for either not attending the training or not providing proof they attended.

The rules adopted at Organization Day did not include the training.

Smith proposed the House Speaker authorize the training and nothing else. “We have example after example,” she said, “some intended and some not.”

But Osborne said training does not belong in House rules. “The best way to get people to attend training is to convince them they should, rather than force them to,” he said. “There will be much higher attendance on a voluntary basis.”

The committee on the same 5-4 votes defeated attempts to give the House Speaker greater flexibility to ensure the House may continue to do its work in a situation like the current pandemic and would allow greater use of remote sessions or committee meetings and provisions to make the health and safety of members, staff and the public the top priority.

Packard said he along with Shurtleff and others have been meeting for several months discussing how they could proceed with the session and maintain safety.

He asked the committee to allow a little more time to explore the possibilities.

He said the refusal to wear masks grew from the end of the session in the fall to Organization Day when about 80 House members refused to wear masks at the meeting held on a University of New Hampshire athletic field.

“One place we fell down a bit was the issue of masks,” Horrigan said. “We enabled the mask refusers more than we needed to.”
Those who refused to wear masks forced the other House members to accommodate them, he said, and it should be the other way around where “those that hate masks should accommodate the rest of us.”

“Mask up or stay home,” Horrigan said, but the committee voted 5-4 down party lines to reject the proposal.

The committee voted 7-2 to defeat a proposed rule from Tim Smith to allow the public to speak at public hearings on bills before paid lobbyists are allowed to testify.

The rule was in place last session, but not in the rules adopted two weeks ago.

Several committee members said committee chairs should have more flexibility to determine how a hearing proceeds.