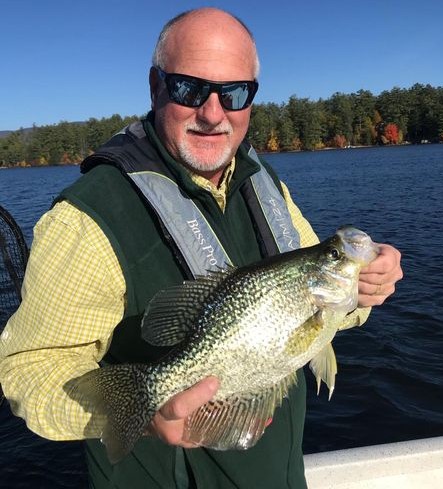 CONCORD – He has taken the media grouse and pheasant hunting in the woods of Dunbarton, surfcasting for striped bass near the mouth of the Merrimack, snowmobiling in Tamworth, foraging for fiddlehead ferns among islands of the Connecticut River, and ice fishing at lots of locations.

On Wednesday, Mark Beauchesne was recognized for his hard work connecting the people of the state and visitors with the outdoors he so loves as a member of the Fish and Game Department.

When he is not at his desk working on communication projects at Fish and Game headquarters on Hazen Drive, Beauchesne is in the woods with his dogs, on the lakes angling for bass, or huddled into an inflatable igloo with a hook through the ice at a remote pond as a licensed guide and an outdoor devotee.

On Wednesday, when the New Hampshire Fish and Game Commission met virtually for its monthly meeting, it was announced that Beauchesne, a long-time employee, received the Recognition Award for New Hampshire Operation Game Thief on behalf of his efforts to preserve wildlife resources.

Beauchesne started with Fish and Game as the outdoor education coordinator in 1995 and held that post until 2004 when he was promoted to advertising and promotions coordinator within the Department of Public Affairs at Fish and Game. He has been active in the development and sustainment of Berry Camp for youths in the Berlin area and organizing the popular annual Discover WILD NH Day in Concord.

Operation Game Thief is described as a “silent” player to protect resources from overhunting and fishing and has been a featured component of the popular reality television series “North Woods Law.” It features the real work of the conservation officers across the state and is aired on the television channel “Animal Planet.”

Engle Entertainment, which has a contract with Fish and Game, actually began airing in Maine with Maine wardens in 2012 but switched over the border to New Hampshire in 2017. Filming the conservation officers has not materialized in one way the department had hoped in terms of recruiting lots of new officers, but it has fulfilled another, that of showing off the state’s seasons, landscapes, species and how the department works at resolving animal-human conflicts.

The hope still is that the free national publicity through “North Woods Law” will have positive tourism and business recruiting impacts for those who see New Hampshire through its lens. Beauchesne has been involved in the series as advertising and promotions coordinator, but he is also known for hosting the wildly popular annual free outdoor festival each spring, which had be to cancelled this year due to the pandemic.

While many expect the state’s bear population has denned-up by now and won’t be seen until the spring when the bird feeders need to come down in April, the department issued a warning to the public Wednesday to expect to see a bear at any time. A good crop of acorns and warm weather has allowed bears to continue to feed later, but that might soon end with the snow and cold.

Andrew Timmins, the New Hampshire Fish and Game Department’s Bear Project Leader, said in a news release that “putting your feeders out later this year will help safeguard bears and protect your birdfeeder investment.”

“Additionally, residents and visitors can help prevent attracting bears by securing dumpsters and garbage cans and storing grills, pet food, and animal feed indoors. The easiest way to solve a bear-human conflict is to prevent it in the first place. Please do your part to help keep wildlife wild and protect New Hampshire’s bears.”

Hunting Rule Making
During the monthly meeting with the Fish and Game Commission, the department’s Wildlife Division and the department’s legal coordinator discussed upcoming rulemaking plans. This is the process that sets limits on hunts and fishing. Paul Sanderson and Mark Ellingwood made the presentation.

Ellingwood, head of the Wildlife Division, said they are reviewing data received from hunters, anglers, and biologists to help set goals for habitat and bag limits. He noted data drives the setting of seasons and added the department is hoping to come back to the commission at its meeting on Jan. 13 with draft proposals for hunting and fishing seasons and then come back Feb. 10 for refined proposals to initiate formal rulemaking.

Ellingwood said the hope is in March there will be two or three virtual public hearings. The department will then deliberate and bring a final package of proposals to the April 14 commission meeting with plenty of time to publish the guidebooks for next fall’s hunt.

“That is our ambition,” Ellingwood said. “We hope to have an agenda item in January.”

Sanderson, legal coordinator, said there will be 40-pages of text with goals which by law have to be updated every 10 years. This will include changes to divisions of wildlife management units, legal methods of taking turkey, clarify language on furbearers to submit the lower jaw of the fisher for study, wildlife predation rules which need updating, and taking of animals on state lands to name a few.

The major difference this year, he said, is there will be no in-person public hearings. The hearings will be handled virtually.

No meeting has been held yet on the proposed legislation. The bills are in-name-only format right now and more information will be available when the proposals become bills.

An unused Route 9 rest area in Antrim is being offered to the department from the Department of Transportation without compensation and could be conserved along with other adjoining lands along the river, the commissioners were told.

Scott R. Mason is the new Executive Director of the Fish and Game Department. He briefed the commission on issues the department has addressed since the last meeting on Oct. 14. No meeting was held in November. The department continues to manage under the pandemic, he said.

Mason thanked the commission and the public for their virtual presence and described the Microsoft Teams meetings the state will hold.

“We will probably need to master virtual meeting skills this year,” he said, but encouraged all to join on to the “Teams” platform.

They held a portion of the meeting on the Microsoft Teams platform, a presentation by Jason Smith on evaluating trophy bass regulations. Mason said the department has had a few employees who have contracted COVID-19 with no clusters or outbreaks. Many, he said, are working from home.

He said he is working with the state Division of Natural Resources on some outdoor initiatives and noted the outdoors has seen a rather large increase in citizen activity due to the pandemic.

“Just trying to talk through things to see if there is anything we can do better,” Mason said.

He said OHRV use is an issue he is working on along with DNR and collaboration with the new Granite Outdoor Alliance to unite users of the outdoors and “grow an experience-driven lifestyle” in the state. Mason said the state’s recreation future depends on such collaborations.

One area he said he thought they could work collaboratively on is hiker safety information.

Another area he is working on relates to the request to allow the commercial import of reindeer into New Hampshire. This poses a major health risk to the state’s wild white-tailed deer population in terms of the introduction of the lethal chronic wasting disease, which is a problem in other parts of the country.

Mason said he has also had an opportunity to review memoranda of understanding for hydropower for the federal re-licensing of a number of dams on the Connecticut River.