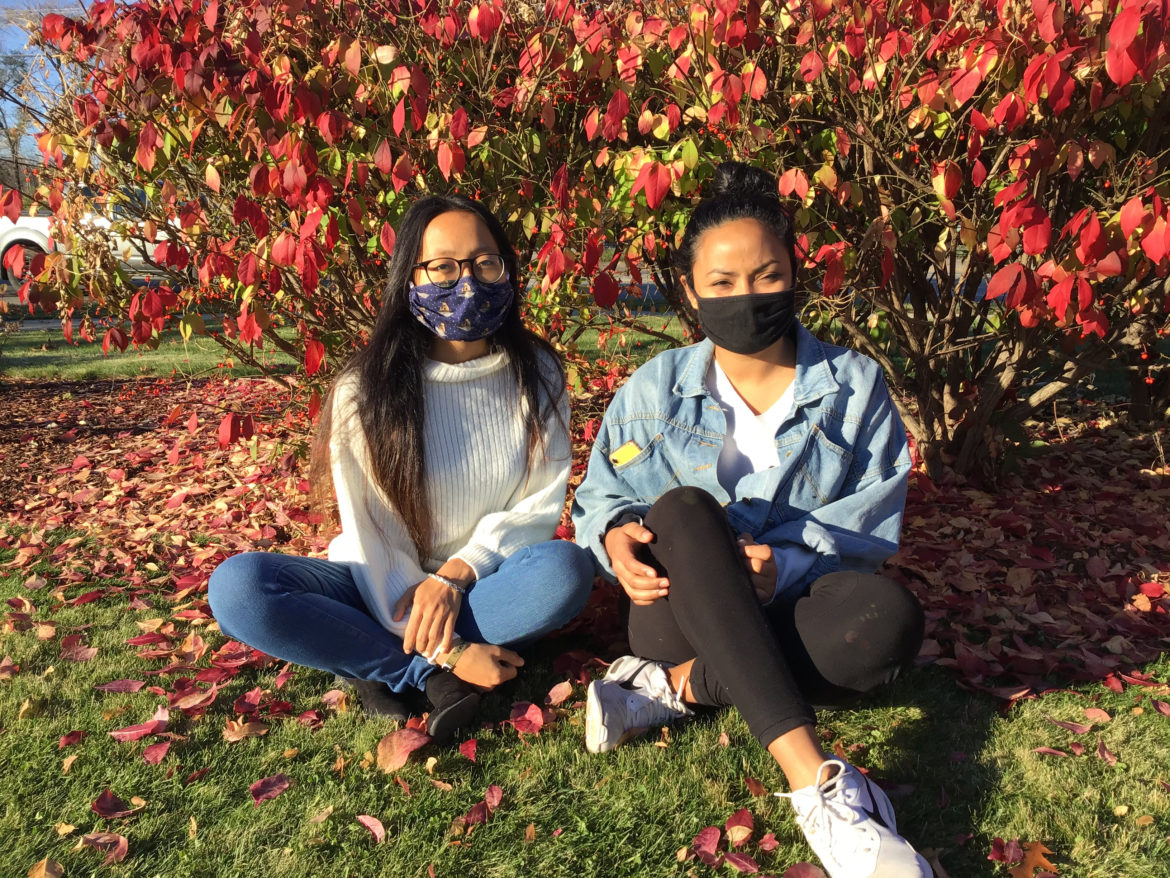 “It is the girls, it is the women, who really can change the family, the society, the community, the world.”  Usha Acharya

In 2017, two girls from Kathmandu, Puja Thapa and Benajil Rai, came to New Hampshire to study at Keene State College. Thapa became a business major with a minor in studio art.  Rai is majoring in multimedia/journalism and minoring in political science.  They both have management positions on Keene State’s newspaper, The Equinox, the Student Voice of KSC.

Finishing up their junior year at Keene State in spring 2020, Thapa and Rai had to decide if they could risk going home for the summer as they had long planned to do. The coronavirus was spreading in the United States. And they missed their families very much.

“My mother said, ‘Just come here. Just come back.'” Thapa said. “It was very scary here. We had fewer cases in Nepal.”

Rai, with other students and Keene State Environmental Studies instructor Scott Semmens, had already booked flights to Nepal. They had planned a field trip to study tiger conservation in association with the Nepal Tiger Trust in Chitwan National Park.  Rai as a videographer would document their research.

At this time, Thapa talked for hours on the phone with her family as she had when she first came to Keene. “It doesn’t feel like I’m talking unless we talk 1 ½ to 2 hours.”  It’s not just her mother she talks to. Her family is in quarantine and she has two sisters so they pass the phone also from sister to sister to father. Her dad is a painter, a watercolorist, who sold his paintings in many city stores.

But that wasn’t happening during the quarantine. Many businesses closed down to prevent spread of the coronavirus and the government closed district borders so people couldn’t leave the city to return to their native villages.

Thapa and Rai had different journeys to Keene State. Thapa was a city girl from Kathmandu. Rai was born in the eastern hills of Bhojpur District and only because she was displaced from her village during the Maoist war was she forced to find a new home and school in Kathmandu. The girls weren’t in the same school but something happened to bring them both to Keene State College.  Sirjanshil Secondary, Thapa’s school, and Takshashila Academy, Rai’s school, were both partners with the Little Sisters Fund.

The Little Sisters Fund partners with schools to fund the education of girls in Nepal who have far fewer educational opportunities than boys. “It is the girls, the women, who really can change the family, the society, the community, the world,” wrote the organization’s director, Usha Acharya.

The Brookings Institute reports that “by the time girls [in Nepal] reach the higher secondary level (grade 11), more than 80 percent are already out of school. Therefore, the school-to-work transition gap is bigger for girls, which then increases their vulnerability to early and forced marriage, domestic slavery, and trafficking.”

Through the Little Sisters Fund both Thapa and Rai received scholarships to fund their education from primary school through university. The scholarships offered both girls an enormous opportunity to gain a full education with a steady focus on building leadership skills.

What did that mean?  “They didn’t force us to do anything,” Rai said. “They said, think of the consequences long term.”

“We had only one more year to complete our education,” Thapa said. “It was senior year.”  Also, they weren’t certain they could re-enter the U.S. when they attempted to return to the college. The girls decided not risk it.

But then the government of Nepal blocked all incoming flights into Kathmandu’s Tribhuvan Airport in an attempt to control the spread of the coronavirus. Their chance to go home was ended. But their chance to graduate was not.

Now in November the number of COVID cases is growing in both Nepal and the U.S.

Thapa praises Keene State for its practices around the coronavirus.  “The College has done a very good job to keep us safe and make sure we have a college experience.”  Students and staff are tested weekly. Classes are hybrid.

Rai does not comment on the U.S. government’s response to the pandemic but is not subtle in speaking about the government of Nepal’s leadership. “The government is heavily criticized by the people. The government is providing no relief. The government is corrupt.  People are starving.” She credits others for helping the people such as the Kathmandu-based nonprofit Sukhawati Foundation that distributes food and, long-term, is engaged with agricultural projects, according to an on-line interview with director Chijman Gurung after winning the Asia Philanthropy Award in 2018.

Both students’ families support their decision to stay in Keene and complete their college degrees. But the forced separation has been painful. “I wish I was with them,” Thapa said.  She and her sisters are artists like their father and she would like be making art with them. One sister told her, “I need to come out of this quarantine learning something,” and she’s devoted herself to painting her best watercolors.

Rai has three sisters and a brother.  “They have each other,” she says.  “I miss them more. I was always surrounded by children.” They studied together in one room, sisters, brothers, cousins.  “One on the floor, one in a corner, one at a writing table, all over the room.” Rai and Thapa have single on-campus apartments at Keene State.   Rai said, “This is the first time I have a room by myself.”  Thapa is quick to qualify the benefit of a room alone.  She says, “But sharing a room has a different joy.”

There’s been a steady rhythm of work now that they are here and completing their senior year. In addition to heavy course loads, Thapa is Administrative Executive Editor of the the Equinox.  Rai is the Equinox Multimedia Director.

They and approximately 40 other reporters get the paper out every Wednesday.  They’ve felt the responsibility to inform with solid communication during the pandemic and to give voice to the students at Keene State. Just as we were interviewing for this article, Equinox staff and faculty advisors got the news that the on-line Equinox won the Associated Collegial Press (ACP) Pacemaker Award, the highest national award for student journalism. Equinox reporters including Thapa and Rai swept this year’s New Hampshire Press Association awards in the fields of Best Use of Video, Features, News Photography, and Investigative Stories.  The Equinox won first place for General Excellence Newspaper.  Rodger Martin, one of their two faculty advisors, said, “Working with the Equinox reporters restores my faith in the future.”

The future after senior year is unknown for Rai and Thapa. They both speak of graduate school. Thapa has Nepali friends in NYC. She may study there. Their education has prepared them for leadership.

Rai said that the name of her school in Kathmandu, Takshashila, is a Sanskrit word for carving on a stone. Through education, she interprets this name for a school, “we shape ourselves into some kind of form.”