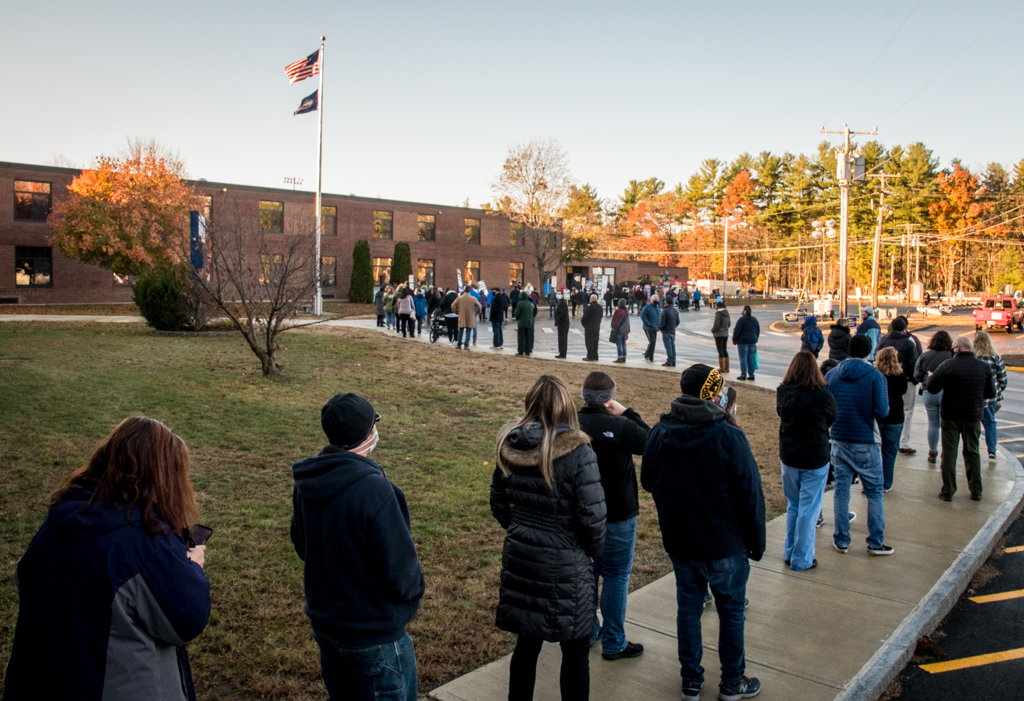 The lines were long Tuesday morning in Merrimack as voters came out in droves.

CONCORD – The Attorney General’s Office said it received “extensive entries” on its election hotline for public complaints and official concerns during Tuesday’s election so it will take a month to review them for public release.

They aren’t expected to be major concerns because officials on election day said that everything went smoothly at the polls and many complaints involved mask-wearing at the polls.

On Nov. 2, InDepthNH.org filed a right-to-know request under RSA: 91a with Attorney General Gordon MacDonald to get access to the complaint/concern log for the general election but received word that it will take until Dec. 2 to redact personal information such as a voter’s party or the candidate they voted for.

There were more than 275 calls on the log and the information needs to be redacted before it can be released, according to Associate Attorney General Anne Edwards.

“For example, people provide us with their personal phone numbers, home addresses, personal email addresses, medical information, dates of birth, and other confidential information that all must be redacted before it can be released.  That takes time to do in order to protect people’s privacy,” Edwards said.

“If we can complete the task before Dec. 2, we will release it when it is done,” she added.

This is a change from the state primary when a similar request was filled in two weeks with a 354-page redacted copy released.

The complaints in the primary included one person who said he was turned away from voting in Manchester Ward 11 because he was armed with a gun. “Moe” was told by the Attorney General’s Office to go back and vote after the office informed Manchester police that it was legal to go to the polls with a gun.

Most of the other issues in the primary were related to voters complaining that the non-mask wearing option to vote made them feel like a second-class citizen.

One questioned whether an Alton poll greeter could wear a “Black Lives Matter” T-shirt, and the Attorney General’s Office said yes, that was free speech and could be worn. A Trump or Biden T-shirt, however, would not be allowed.

Complaints during the primary came in from polling locations in Candia, Alexandria, Antrim, Stoddard, Portsmouth, Hudson, and Milton.