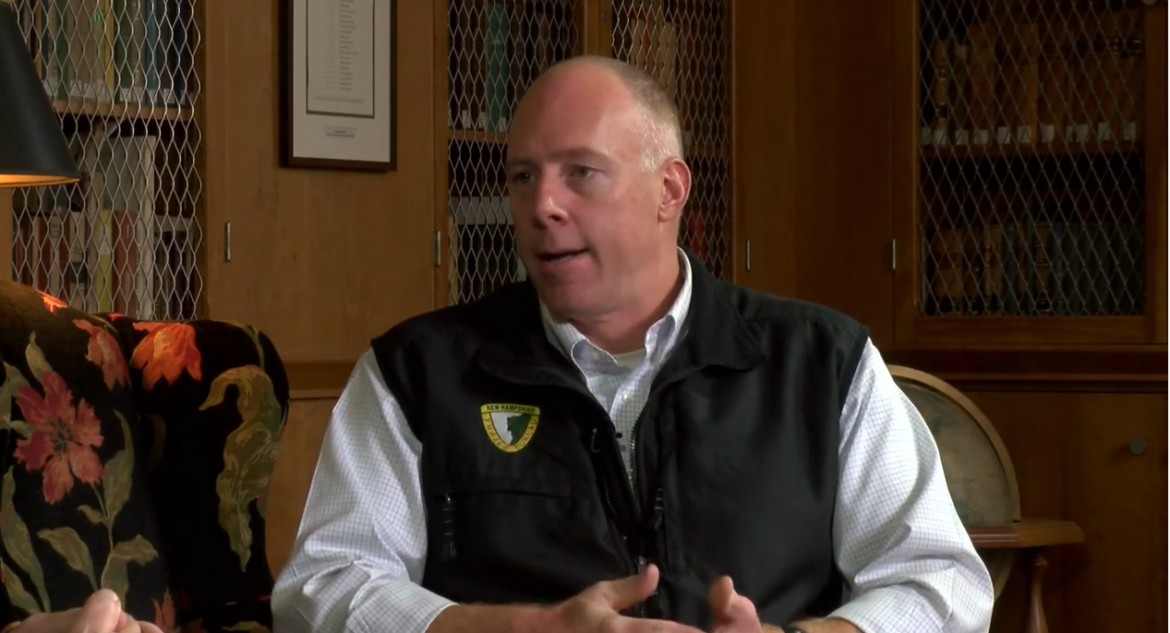 Chris Gamache, chief of the state trails bureau, is retiring as of Thursday.

PEMBROKE – A merger between Concord Hospital and LRGHealthcare in Laconia, foreclosures, and abandoning seven miles of rail-trail between Bethlehem and Littleton to make it good for recreational use were among the issues discussed by the Governor and Executive Council on Wednesday.

7 More Miles
Chris Gamache, chief of the state trails bureau, is retiring as of Thursday after a long career helping to develop and maintain more than 6,000 miles of trails across the state for both motorized and non-motorized recreational use.

A lot of it has relied on repurposing old rail corridors for recreational use. Gamache asked councilors to take on a last-minute agenda item to approve a plan to abandon seven miles of rail from Littleton into Bethlehem and to develop it into a winter use trail for both snowmobiles and cross country skiing and for summer bike and walking through Littleton’s downtown River District. It was unanimously approved.

Gamache said it took about seven years to get through the process of getting the rails to be abandoned and the state was able to find four contractors, with the low bidder from Littleton, Hammer Down Construction.

Funding will come through a combination of federal Northern Borders grant money and that which is within the recreational trails program’s fund.

The goal is to start the phase now with rail ties removed on three miles before winter. It will start off Industrial Park Drive in Littleton where the existing Ammonoosuc trail now ends and go to Reddington Street through the downtown part of the trail.

Phase two will go just shy of Wayne Road in Bethlehem probably a year and a half away before the funding can be put together.

He acknowledged “my last day is set for tomorrow…but this one is a major project for me to get through the council so that the process can begin tomorrow, if possible.”

Gov. Chris Sununu said he is “thrilled” that the deal between the two central New Hampshire health care organizations is being solidified and noted that he feels rural access to critical care is vital.

He said he knew LRGHealthcare was in financial trouble before COVID-19 and going into federal Chapter 11 bankruptcy was “good news in that it did not fall off the tracks” when combined with the daunting issues of the pandemic closing elective surgeries for months and laying off hundreds of workers.

Under the weight of more than $100 million of debt, LRGH filed for Chapter 11 bankruptcy Monday in federal bankruptcy court.

The hospital organization that includes both Lakes Region General in Laconia and Franklin hospitals. Hospital officials said despite the filing, patients and employees should not experience any disruptions. Concord Hospital offered $30 million to acquire the organization’s assets.

Gov. Chris Sununu said the deal was in the works for a long time before COVID-19 and he said it was important that they “stuck with it.”

Under the offer, Concord would acquire both hospitals in Franklin and Laconia as well as its ambulatory sites. Both LRGH and Concord are non-profit organizations with similar missions.

Lakes Region received a grant of $5.25 million from what was then the state fund in spring but was replaced with federal CARES Act money when it became available. Sununu noted that money also went to other rural hospitals to keep them open, noting, for example, that money went to help keep Littleton’s obstetrics ward open.

Executive Councilor Michael Cryans, D-Hanover, in whose district Littleton and LRGH services are located, said that in many communities, hospitals are the largest employer, and losing them has a “domino effect” in the local economies.

“COVID definitely rocked a number of the segments (of the economy) healthcare, hospitality, tourism, everything we do,” Sununu said.

As the weather gets colder and homeless people are forced to find some form of warm shelter despite concerns for COVID-19 in shelters, the council turned its thoughts to the homeless and preventing homelessness.

In 2019, the estimated number of homeless in the state was about 1,400 but anecdotally, that number appears to be going up, particularly in the city of Manchester where Manchester Ink Link reported in August that the crisis has seen a significant uptick.

The council approved several contracts to help the homeless population while their discussion went to preventing homelessness.

Chris Santaniello, director of the state Division of Economics and Housing Stability said her office has seen an uptick in activity related to evictions and said the state is working closely with local CAP agencies throughout the state as well as the state bank association and legal assistance.

While a state moratorium related to COVID-19 expired, Lisa English of the Governor’s Office For Emergency Relief and Recovery said lenders cannot foreclose until at least the end of 2020 for those with federally backed mortgages such as Fannie Mae and Freddie Mac.
There is also a forbearance program.

Executive Councilor Andru Volinsky, D-Concord, said he received an anonymous letter about the operations of the New Hampshire Fish and Game Department that he wanted to be sure other councilors and the governor read and asked that the new Executive Director, Scott Mason, prepare a future response.

“I don’t pay attention to anonymous letters,” Executive Councilor Ted Gatsas, R-Manchester, said.
The contents of the letter were not publicly disclosed during the meeting.
.