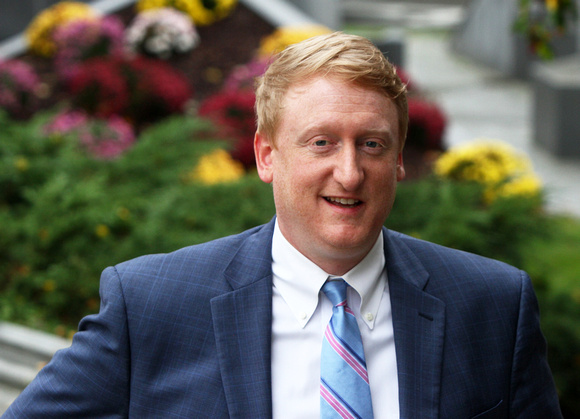 The Democratic nominee for governor said Gov. Chris Sununu has approved such contracts without competitive bids, benefitting his friends and political contributors.

In a press briefing with New Hampshire media, Feltes said the Republican incumbent governor has taken over $1 million from corporations and their political action committees and rewarded these donors with taxpayer-funded no-bid state contracts and tax breaks.

In a call with national leaders of the group End Citizens United, a national political action group working to reverse the 2010 Supreme Court case which allows corporations to make political contributions, Feltes said Sununu is not listening to Granite Staters but instead, his donors.

The focus of the call was to connect President Donald Trump with Sununu using Sununu’s own words that he is a “Trump guy through and through.”

Feltes called on Sununu to release his own taxes, noting he has never done so.

The New York Times just published information that Trump has paid very little in taxes and has refused to release his tax returns to the public which may show massive corporate losses.

Trump has been lagging in many polls, including in some swing states, and some believe Trump is a liability to Sununu.

Sununu didn’t directly respond, but his spokesman Ben Vihstadt sent his own statement and an earlier one by Health and Human Services Commissioner Lori Shibinette.

Vihstadt said: “Dan Feltes is a hypocrite who took LLC money before he returned it and is now the beneficiary of millions of dollars in outside group spending leveling false attack ads against Chris Sununu.

“The Governor files all financial disclosure forms, as required by law, as has every previous governor. Releasing tax returns is a political gimmick from Dan that even his own primary opponent wouldn’t engage in.”

The statement from Shibinette said Sununu empowered the team at HHS to move forward on contracts at a rapid pace, but had no role or influence in selecting contracts that benefitted two of his donors. “It was entirely at the discretion of myself and my team,” Shibinette said.

“The Grappone Center was the only facility near HHS Headquarters that had the capacity and capability to handle the needs of this contact tracing contract. We informed Governor Sununu of this contract after we finalized all logistics,” Shibinette said.

“The state reached out to numerous health care organizations to provide the services laid out in the ConvenientMD contract, and when no others would step up, ConvenientMD was the first to reach out to the state offering their services.” The owners of the Grappone Center and ConvenientMD both donated to Sununu’s campaigns.

President Tiffany Muller of End Citizens United said New Hampshire is among a handful of states her organization is focused on and has endorsed Feltes along with U.S. Senator Jeanne Shaheen who is running for re-election as a Democrat.

“New Hampshire is one of our priority states and let me tell you why,” she said, saying Sununu is one of the most “Trumpian candidates” and that his interest is in helping himself, his family, and his special interest donors.

She said Sununu has rewarded these donors with no-bid contracts and tax breaks.

Muller said Sununu singled out his family’s Waterville Valley ski resort lodge for special tax breaks and refused to release his tax returns, raising concerns he may be abusing his position of power.

She said he is taking money from drug companies and health insurance providers, making health care more expensive to the average person.

Muller said Feltes is focused on “unrigging the system” to make it fairer and more transparent.

Feltes said he’s led the fight to pass strong anti-corruption bills in the state Senate and has refused all campaign donations from corporate PACs in his bid for the corner office at the State House.

This week, to bolster Feltes’ campaign, New Hampshire Democrats launched an “aggressive statewide campaign to expose how just like Donald Trump, Chris Sununu has been enriching himself, his family, and his donors at the expense of taxpayers.”

At press conferences to be held across the state, local Democratic leaders will discuss how Sununu is using his position to benefit himself and his family, said Holly Shulman, spokesman for the New Hampshire Democratic Party.

During the press call, Muller introduced Jeff Tyler, her organization’s state director, and noted that the national PAC is looking at helping out federal races in North Carolina, Arizona, Pennsylvania, Missouri, Texas, and Wisconsin and on the state level, Missouri and Montana as well as New Hampshire.

Feltes said when elected governor, he will ban no-bid contracts on day one and start the bidding process earlier to ensure there are competitors for state bids.

He said if you want to improve transparency in state government “you don’t allow no-bid contracts.”