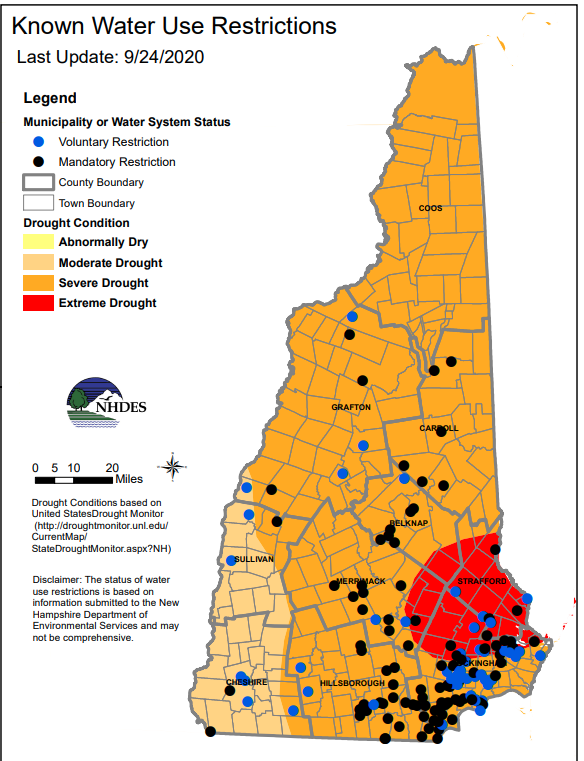 CONCORD – Rain in the forecast is good for a parched state, but likely only a drop in the bucket, state officials said Monday.

Gov. Chris Sununu is convening the New Hampshire Drought Management Team Thursday at 2:30 p.m. to discuss measures and specifics being taken to minimize the potential impacts.

Norm Harris, president of Gilford Well which has been in operation since 1962, had a record week last week in requests for estimates to drill or address dry wells.

“We are doing our best to keep up,” Harris said noting the drill teams are working six days a week now.

James Martin, spokesman for the New Hampshire Department of Environmental Services, said rain expected to begin late Tuesday is welcome but will not likely make a sizeable difference in the water crisis facing the entire state.

Martin said 100 percent of the state is now in a drought with some areas of the state in an extreme situation, including the tip of Rockingham County, all of Stratford County, and areas of western Merrimack and Belknap counties.

He said for 20 years the state has had a drought map and there was only one other time, in the summer of 2016, that the state had extreme drought.

He said that problem was remedied after a tropical storm came through.

In addition to impacts to residential wells, farmers cannot water their crops, fish cannot swim upstream to spawn and aquatic river and lake species are in concentrated areas, hydropower cannot be made and even the ski industry cannot pump water into their ponds for snowmaking.
“I’m glad we are going to get some rain and it is (predicted to be) the type of rain we need but we need many, many more of these events to make a difference,” Martin said.

In addition to the governor issuing a ban on open flames in public areas last week and municipal water systems prohibiting outdoor water use ,https://www.des.nh.gov/organization/divisions/water/dam/drought/documents/wu-restrictions.pdf he said the time has come when everyone should conserve what water they have for emergency use, Martin said.

Gail McWilliam Jellie, director of the Division of Agricultural Development for New Hampshire Department of Agriculture, Markets & Food, said the drought level varies by region in the state and some are drier than others.

“Farms have been dealing with dry conditions all season and have been able to make up for some of the lack of rain with irrigation. However, we are hearing stories about ponds drying up in some areas,” she said.

The lack of water impacts harvest quantity and fruit size, she noted.
Crops such as hay that are harvested multiple times during the season have seen poor regrowth and reduced yield.

“The expected rain this week will be welcome on farms across the state,” she said.

This will be the third time this year that Sununu has convened such an emergency meeting.
The New Hampshire Drought Management Team will meet via video conference. This is a public meeting and those who would like to listen in must RSVP before the meeting to ensure connectivity.

At the meeting, an overview of drought conditions and impacts in the state will be discussed.
For information about drought management in New Hampshire or the NH Drought Management Team, please see www.des.nh.gov/organization/divisions/water/dam/drought
To RSVP for the meeting, please email Carolyn Guerdet at Carolyn.Guerdet@des.nh.gov.