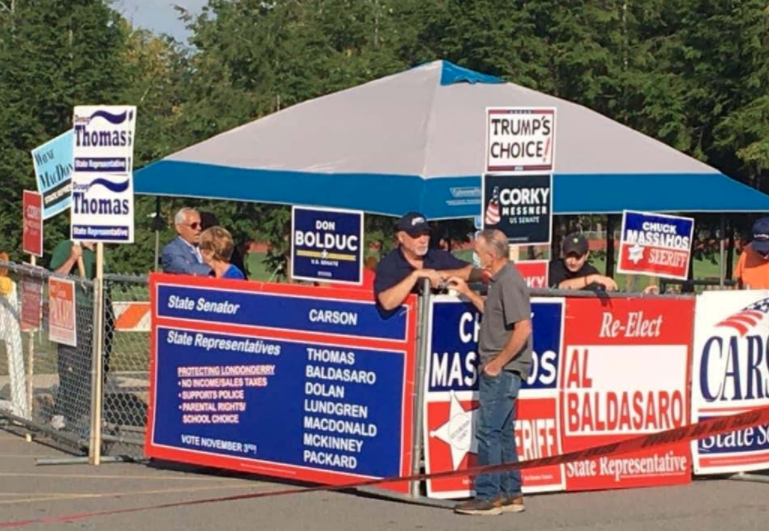 Someone sent the Attorney General's Office this photo from Londonderry stating: "To Whom It May Concern, I am disgusted with your office s actions in overruling our town s attempt for safety measures and allowing this to happen. No masks, no distancing. This is your fault."

CONCORD – InDepthNH.org has received a redacted copy of complaints and questions from officials to the 2020 State Primary Call log after filing a right-to-know request under RSA 91a to the New Hampshire Attorney General’s Office.

Some personal information regarding the complaints was redacted from the copies of the emails, such as a person’s political party affiliation.

One voter from Manchester complained about being turned away from the polls on Sept. 8 primary for bringing a gun to the polling place. But was told it was legal and to go back and vote.

“I spoke with Moe and his friend and explained that I couldn’t point out a law that said that he could carry a weapon into a polling place. I explained the legal argument why he could and told him I would call the Manchester PD to explain that it was okay under state law. I did explain the Gun Free School Zone Act and explained the potential federal liability. Moe said that he has voted with a weapon before and never had an issue. But, when the police officer said he could not go in, he did not go in. I told him to go back to the polling place and I would call the MPD to discuss the issue. I called dispatch and spoke with a duty officer who said that she understood and they would speak with the officer. I confirmed that Moe would be returning the polling place within 20 minutes to vote.”

The calls show a number of concerns expressed by individuals who refused to wear masks at the polls and found the accommodations for them insufficient and that they felt like “second class citizens.”

Another concern was raised in Alton about wearing a Black Lives Matter shirt:

“Calice called to ask whether a poll worker can wear a Black Lives Matter shirt. This person was the greeter at the polls. The answer is yes, they can wear this material since RSA 659:44 only prohibits election workers from ‘electioneering’ which means acting in a way ‘specifically designed to influence the vote of a voter on any question or office’ we have interpreted this to mean campaign material that unambiguously communicates a purpose or goal of instructing a voter how to vote, i.e. express advocacy. Since Black lives matter does not fit this prohibition, it is permitted.

“Realizing that there may be voters who complain that this is improper, Calice planned on telling the moderator that he/she could make a request to conceal it or to work in an area that is less public, but ultimately it was permitted.” – Matthew T. Broadhead, Senior Assistant Attorney General

A number of other complaints were related to change of party affiliation and simple questions about what verification information would be needed at the polls to show residency or absentee voting.

One comment related to concern a new voter had for uniformed and armed police at the polls.

There were some cases where poll workers were asking about the distance of political signs from a polling location.