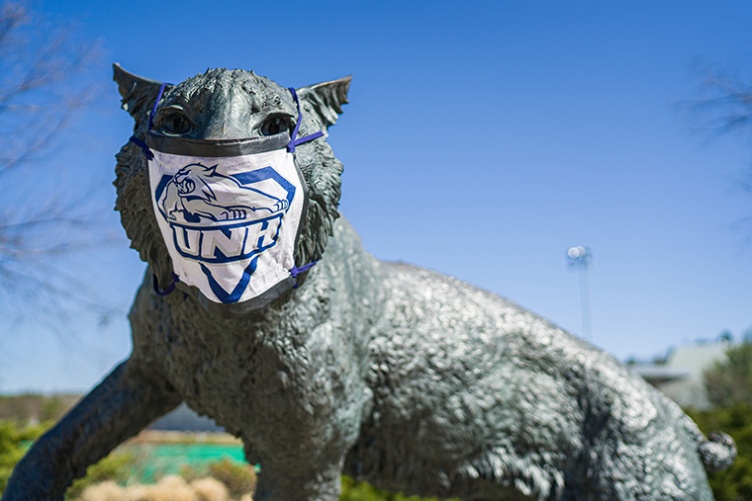 Mask wearing wildcat statue is in front of the Whittemore Center at UNH in Durham.

DURHAM – It isn’t like the University of New Hampshire administration hasn’t had to deal with beer and bad behavior before, but it might just be the first time that it involved the New Hampshire House of Representatives.

Speaker of the House Steve Shurtleff fired off a letter of apology Thursday to the president of UNH, the vice president for finance, and the UNH police for “inappropriate behavior” of some of its members, noting that “the actions of a few do not represent the New Hampshire House of Representatives.”

“I also want to take a moment to apologize for some of our members at yesterday’s session,” Shurtleff wrote.

“It came to my attention that some of our members were drinking beer in the hall and that some members were outside of the Whittemore Center without masks, against both UNH and Durham protocols and ordinances,” Shurtleff wrote.

The pandemic caused the 400-member House of Representatives to look for another place to convene than the cramped quarters at the State House.

UNH officials agreed to allow the House to meet instead at the Whittemore Center, a large hockey arena on the campus in late June to complete their legislative agenda, which had been suspended by COVID-19.

The House was allowed to return this past Wednesday to address Gov. Chris Sununu’s vetoes, none of which were overridden.

Shurtleff, a Democrat, first offered thanks to the state institution for extending hospitality and allowing for a “historic” convening of the House outside the State House.

But when some House members were seen drinking beer in the halls and not wearing masks outside the Whittemore, Shurtleff had to add to his thanks a letter of apology.

Shurtleff doesn’t name names or party affiliations in the letter.

A total of 47 Republican House members refused to wear masks inside the Whittemore Wednesday and sat in a special section, but they were apparently not in violation of the UNH or Durham mask rules because when the House is in session wherever that is, it is bound by House rules.