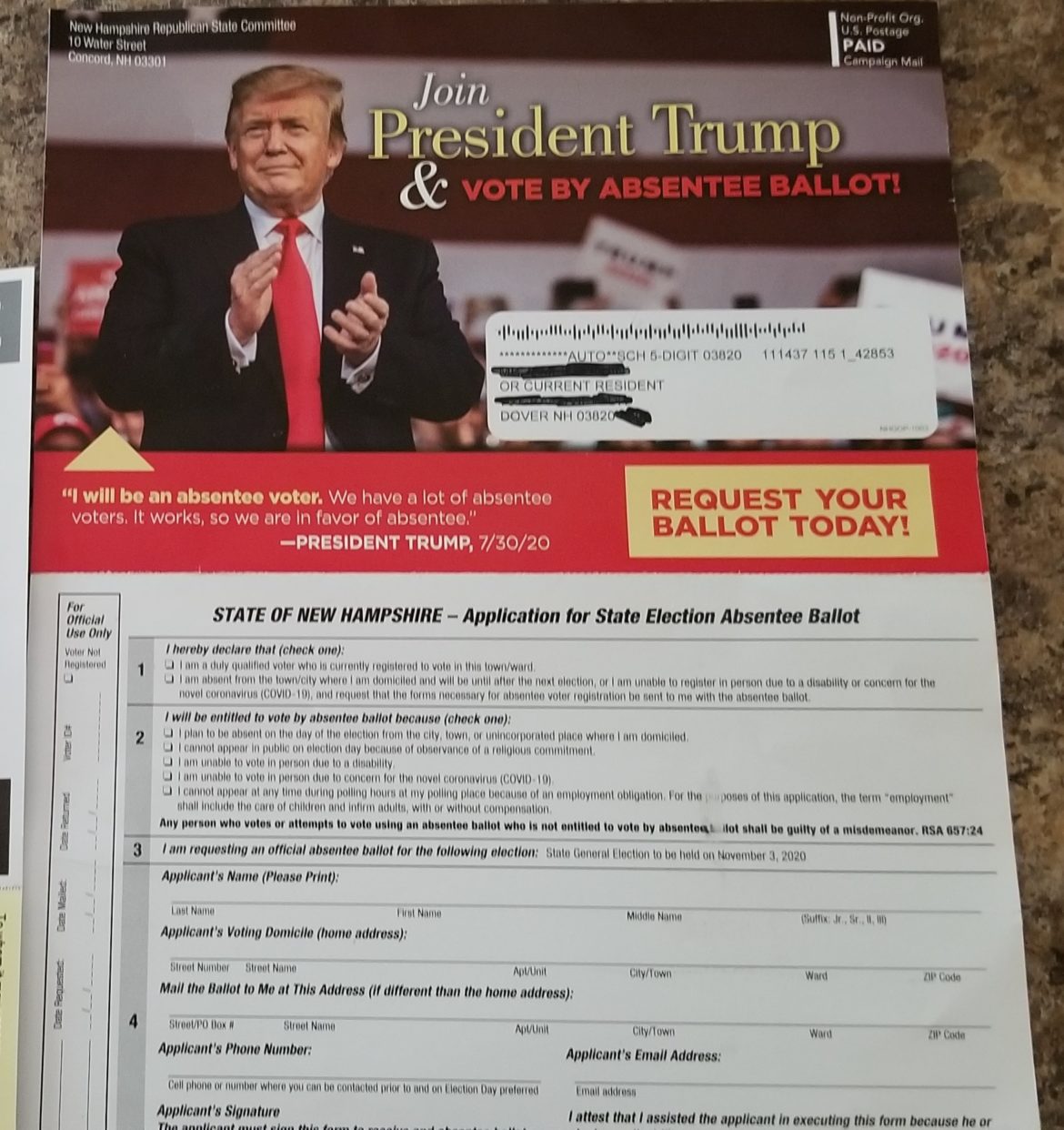 Bryan Gould, the NH GOP’s attorney told MacDonald via email Monday they will use newspaper ads, phone calls and emails to reach voters who received the absentee ballot application form.

The communications will make three points, according to the plan, including the following:

a. “Clerks will accept a properly completed application as a request for an absentee ballot for the November general election.

b. Voters completing the application will likely not receive an absentee ballot for the September primary.

c. Voters who completed the application may vote in the primary by voting on election day or by request by downloading an absentee ballot at https://sos.nh.gov/. The form can be printed, completed, scanned, and emailed, faxed, or returned in person to the clerk’s office.”

MacDonald issued a cease and desist order Friday because the NH GOP mass mailing Aug. 20 didn’t contain the required language and may have confused voters shortly before the Sept. 8 primary into thinking they were requesting an absentee ballot for both the primary and general election when it was only for the general election Nov. 3.

The mailer also didn’t include language allowing the voter to ask whether he or she wanted a Democrat or Republican ballot for the state primary. It also didn’t contain the language that any person who witnesses and assists a voter with a disability shall print and sign his or her name. MacDonald ordered the NH GOP to submit a plan by Monday at the close of business, which Gould did.

“Yes, it provides a good response to the concerns raised in the cease and desist order,” Edwards said.

Edwards said there was no new information on the other reviews her office is conducting on mailers sent by the NH GOP – one on Aug. 6 involving a voter registration application that all contained the return address of Durham regardless of the town or city the voter lives in.

The NH GOP will work with the New Hampshire Press Association to determine the most appropriate newspapers to place ads in, Gould wrote.

“The NHGOP in consultation with the RNC will identify any voter and/or household that has received, completed, and returned the Absentee Ballot application that was mailed to voters in New Hampshire by the NHGOP,” Gould wrote.

The NHGOP used a USPS barcode scanning system that allows them to identify which recipients of the absentee ballot application filled out and returned the form.

“The results of the bar code scanning system as of Monday shows the data can be pulled daily which will ensure that the NH GOP is able to contact any voters who have returned this form in real time,” Gould wrote.

“As of Monday, 2,965 voters in New Hampshire have returned the absentee ballot application,” Gould said.

After identifying these voters, the NHGOP, with the assistance of the RNC, will call these voters individually.

There will also be an option for voters to ask to speak with a NH GOP staff member who will provide information on how to request an absentee ballot or vote in-person on election day.