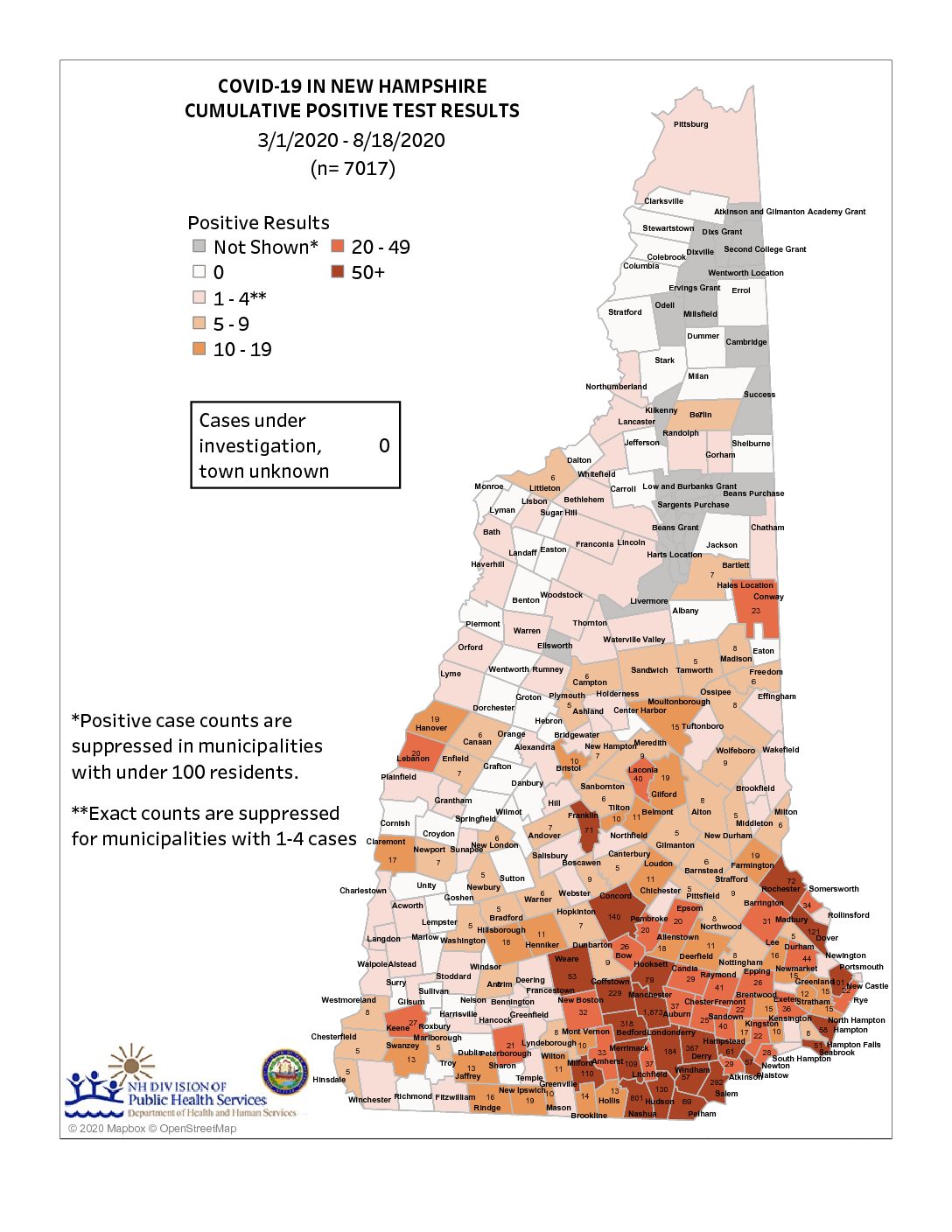 CONCORD – New Hampshire’s unemployed will get $400 a week now as Gov. Chris Sununu said he will take up President Donald Trump’s recent offer to give $300 weekly from federal coffers with a state match of $100 a week from the state’s unemployment trust fund.

Dr. Benjamin Chan, the state’s epidemiologist announced 13 new cases Tuesday of COVID-19 with one new death of a person who lived at a long-term care facility. Three new individuals were hospitalized for a total of 712. The total number of cases stands at 7,017 since the start of the pandemic.

For unemployed people who had been getting an extra $600 a week in federal help but lost it as of Aug 1, this will go part way to helping them through the crisis until at least the end of this year, Sununu said at Tuesday’s news conference.

While it may take a few weeks to get the checks for some, all of it is retroactive to Aug. 1, Sununu announced.

The new stipend, through the Lost Wage Assistance Program, will last 22 weeks. It will mean more than $340 million in federal dollars coming to New Hampshire to help these individuals and the state’s economy, allow for parents who are unemployed to stay home with their kids if their schools go to distance learning and will hopefully stave off evictions, Sununu said.

It will mean a drawdown of $10 million from the state’s unemployment trust fund, however. Sununu announced the state will also see reduced health-care insurance premiums for those who get their health insurance on the insurance exchange because the state has entered a new pool. Health officials announced a continued decline in the number of confirmed cases of COVID-19.

Sununu noted that the numbers have been stable and perhaps reduced in the past two to three weeks “but we are still seeing transmission within our communities. The risk is still out there. We have been successful at managing and controlling the spread of COVID-19 so ‘thank you’ to all of you who continue to take this seriously and follow public health guidance.

“We need people to continue to practice social distancing, use cloth face coverings when out in public places, still please continue to avoid large gatherings, and continue to use good hygiene,” to prevent the spread.

The state has only two long-term care facilities facing outbreaks of the virus and the hope is that they will be able to close in a week or more, Health and Human Services Commissioner Lori Shibinette said.

The state’s unemployment numbers have continued to come down and to date, it has paid out over $1.2 billion in state and federal unemployment benefits due to closures of businesses caused by the pandemic.

Sununu said the state moved very quickly to get that financial relief out the door and the state Department of Employment Security has been “on the ball…responsive and innovative.”

The federal Lost Wage Assistance Program was signed by the president Aug. 8 to allow states to opt-in when Congress did not come to an agreement on a stimulus bill. New Hampshire will submit its application to FEMA for this program today, he said.

Sununu said originally, it looked like the state could not use its unemployment trust fund for this new benefit and would have to pay $120 million from the state’s general fund and only a fraction of citizens would be eligible.

Based on the federal guidance received over the past week, it appears that 100 percent of all receiving benefits can get this money and that the state can use its trust fund. “It’s really a very, very good deal.

“It’s a chance to support the unemployed or if they have to stay home,” for their kids, he said.

Those who already get at least $100 minimum from the state will continue to receive that and that will serve as the state’s $100 a week match, Sununu said.

About 5 percent of those receiving unemployment benefits receive less than $100 a week from the state. The state will move that amount up to $100 and that will provide the state’s match.

Sununu cautioned that in the case of those individuals, about 5 percent, it might require a little more time to get paid as the federal government moves the paperwork around but that all of it will be retroactive to Aug. 1.

Sununu noted that the federal funds are limited and the state needs to get in now to get those dollars here.
He said the feds allocated $44 billion and if the money runs out before Congress acts, the program would end on the federal side.

Good news also extended to those who buy health insurance on the insurance exchange. Sununu said the premium cost to New Hampshire residents is going to go down.

The annual federal government published rates were issued Tuesday morning and for those who purchase on the health insurance exchange will see a decrease in premiums of over 20 percent. Thousands of residents buy their insurance this way.

“It’s a huge deal,” during a pandemic, Sununu said.
It came because “we have been successful and last fall…got a 1332 waiver from feds to allow a new insurance pool that allows a better balance of insurance coverage and allows those rates to decrease.

“We want it to be available, accessible, and use it to get that preventative care,” Sununu said.

Bike Week
Sununu noted that Bike Week is coming up Aug. 22-30 and “a lot of people are excited about it.”

He said he does not expect the numbers to be as large as in other years (this is the 97th) because of the pandemic. Because many may be coming from out of state, there is a lot of effort to work with lodging facilities to notify them of the need to tell their visitors from outside the region that they need to quarantine for at least 14 days before arriving here.

He said the liquor commission is also working with restaurant and bar owners to ensure that current emergency guidance orders are maintained and that there will be significant penalties if they are not.

“We know the vast majority of businesses do a very good job,” he said.
There will be fly-overs of Weirs Beach and billboard trucks and messages on the highways asking people to “mask up,” Sununu said.

He said the state’s success hosting a NASCAR race without a serious outbreak of the virus is testimony to being able to pull off large gatherings and there is a new rule requiring masks worn at events where more than 100 people are present.

If anyone is concerned, all they have to do is “look at Hampton Beach,” Sununu said. “We have a proven track record.”

Sununu said he is not going to take an absentee ballot. He has done it in the past but he can literally walk to the polls in his town.

“I carry a little bit of fear in getting COVID every day,” Sununu said. But knowing what is planned with the Secretary of State’s Office, communications with the regional Postal Service leaders and the knowledge of the state’s track record on carrying out elections makes him feel safe that the elections can go off without fear for public health and accuracy of the vote count.

“I feel very confident that people can go to the polls in a healthy and safe way,” Sununu said.

There may be situations in big polling places like Londonderry, but he said he did not feel that masks should be required on a statewide basis as it might suppress or deter someone to exercise their right to vote.

Sununu said people should feel confident in using the mail service for voting.