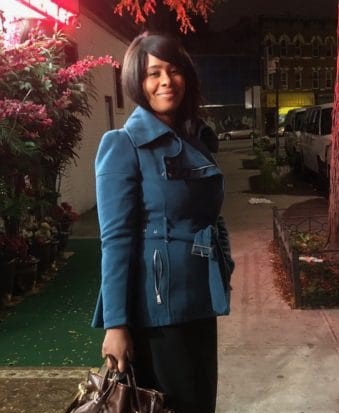 Sylvia LeRoy was working as a nurse in a Brooklyn hospital treating Covid-19 patients when she contracted the disease. (Photo courtesy of Shirley Licin)

COVID-19 sent Sylvia LeRoy, a pregnant nurse working at a Brooklyn hospital in the earliest days of the pandemic, into a tailspin that left her barely responsive in a brain recovery center in Pennsylvania.

The coronavirus hit the 35-year-old with an array of maladies — from severe muscle spasms to stomach issues and even a dislocated jaw, likely from when she was revived from heart failure — that had to be addressed before the brain center could awaken her from a near-vegetative state.

There was another hurdle as well. LeRoy’s insurance would only cover 60 days at the brain recovery center, not enough time for her to make real progress, her sister Shirley Licin, who is caring for the healthy baby that LeRoy gave birth to while sick, told FairWarning. Nor would her insurance begin to cover the costs of her recovery once she left the center, from a $70,000 vehicle capable of moving her wheelchair to a highly specialized $4,000 shower chair.

It seemed obvious to her  family that LeRoy got the disease at her workplace, the Brookdale University Hospital Medical Center in Brooklyn, which had been overwhelmed with COVID-19 when the outbreak started.

So they did the logical thing — they filed a workers’ compensation claim.

Across the United States, workers like LeRoy face wildly varying rules about whether COVID-19 is covered as a workplace injury. More than a dozen states, including Utah, Michigan and Illinois, have changed their laws or rules since the pandemic, often so that a nurse would be presumed to have contracted the virus at work, leaving it up to the employer to prove that the worker got it someplace else.

But even among the states that have created so-called “presumptions,” there are significant differences, with some extending them only to hospital or emergency response workers, while others include all of those whose jobs required them to interact with the public during the pandemic.

Still others, like New York, have not made a change, forcing workers to try to document that they contracted the disease on the job. New York legislators have introduced a couple of bills, one creating a presumption for emergency responders and another that defines COVID-19 as an occupational disease, but they remain bottled up in committees.

That leaves workers like LeRoy with the formidable task of trying to prove they contracted the virus on the job. The workers’ comp carrier who denied LeRoy’s claim, GCG Risk Management, did not respond to a request for comment.

“Trying to prove where somebody contracted an infection is really difficult,” Bill Smith, president of the nonprofit Workers’ Injury Law & Advocacy Group, said. “You’ve got health care workers working around individuals who are positive and you would think clearly they would be covered. They may or may not, depending on what state you’re in.”

Workers’ comp systems vary considerably from state to state, but in general, employers are required to maintain workers’ comp insurance, which they most often obtain from private carriers that cover worker costs for medical treatment, lost time and permanent disabilities.

These insurers make determinations on claims based on whether they believe the injury occurred on the job, as well as what treatments are warranted. Workers whose claims are denied can appeal to hearing officers and workers’ comp boards, and eventually in court, but in complicated cases this can take years.

The stakes are high for those with serious cases. Even if they have health insurance, they can face ruinous costs if their workers’ comp claims are denied.

And for survivors of those who die, the workers’ comp system may offer the only way to make up for their loved one’s lost income.

In Greeley, Colorado, the workers’ comp administrator for the JBS USA meatpacking plant denied a claim from the family of Daniel Avila Loma, 65, who died of COVID-19 in late April. JBS did not respond to requests for comment.

Loma had worked at the plant for 30 years. When he got sick in March, he was working in the knife-sharpening shop, where workers dropped off their knives each day as their shifts ended. COVID-19 ran rampant at the JBS plant, which ultimately had almost 300 cases and six deaths.

Loma, who had five children, 16 grandchildren and a great-grandson, was on a ventilator and had several strokes before he died. His wife and one of his adult sons, both disabled, lived with him.

“My father was the sole provider for the household,” another son, Olivier, wrote in a letter supporting a Colorado bill to create workers’ comp presumptions for front-line workers.

Daniel Avila Loma, second from right, contracted a fatal case of COVID-19 and his family believes it was while working at a meatpacking plant in Greeley, Colorado. (Photo courtesy of Olivier Avila)

The bill failed over claims it would dramatically drive up costs for public agencies. Almost 30 businesses, associations and chambers of commerce wrote to the state Legislature that extending the COVID-19 presumption to all workers would cost $3 billion, assuming half were infected.  Mack Babcock, the attorney for Loma’s family, believes those estimates were wildly exaggerated.

In Ohio, Santina Curry, 45, a correctional officer at the Cuyahoga County Jail, came down with COVID-19 in March after she served breakfast to an inmate who was coughing and later tested positive. A week later, she got an excruciating headache, then a fever. She was sick for about nine weeks, and even now she’s struggling with shortness of breath, which prevents her from being cleared to go back to work.

“I’m not able to do a lot of things, like family activities, grandkids’ birthday parties,” she said. “I’m so tired.”

Curry, who is getting neither disability nor unemployment benefits, has instead started a GoFundMe page to cover the costs of her illness.

Her employer, Cuyahoga County, is self-insured for workers’ compensation and fought the claim, and a district hearing officer at the Ohio Industrial Commission, which hears workers’ comp appeals, sided with the county. But Curry continues to fight for coverage and is waiting for the results of an appeal last Wednesday to a higher level hearing officer.

Her attorney, David Nager, said the county did not present evidence that Curry got the disease elsewhere, just that she failed to prove she got it at work. Cuyahoga County did not respond to a request for comment.

Ohio is one of the states that has not changed its law to shift the burden of proof to employers. Among the workers Nager is representing are truck drivers, a fast-food worker and employees of grocery stores and hospitals.

Historically, state workers’ comp systems have not covered most infectious diseases. There have been exceptions, said Emily Spieler, a professor at Northeastern University School of Law in Boston and an expert on workers’ comp. One example would be a nurse who worked in a tuberculosis ward and contracted the disease. But the line is usually drawn at “ordinary diseases of life” that someone could get as easily outside of work as on the job.

“Nobody was getting compensated for getting the flu, for example,” Spieler said. “The question becomes, in a pandemic, where you’re telling people they have to go to work, and they may or are likely to be exposed, how should the workers’ compensation system respond?”

Since the pandemic started, 15 states have made it easier, either through laws or regulations, for workers who contracted COVID-19 to get their claims accepted, according to one tally. This often takes the form of creating a presumption for certain categories of workers. Fewer than half of the remaining states are considering legislation or other changes. The rest have done nothing.

The lack of a presumption may not doom a case. In states that have not created new rules for COVID-19, workers may still argue that the coronavirus is a work-related illness like black lung disease or a repetitive stress disorder. They have to show that their risk was higher than the general public because of exposure at work.

In some states that have not created special treatment for workers who get COVID-19, insurers are nonetheless accepting claims.

In Ohio, for instance, some employers didn’t appeal when the state-run workers’ comp insurer approved claims, Nager said, “whether it was that they didn’t want to be the first jerk employer on the block or liked their employees or what.”

“We’ve had some very, very acute cases, which are very tragic, that are not being accepted,” he said.

Uncertainty over the long-term effects of COVID-19 may be driving the rejections, Gruber said.

“Is a person who has a positive test and has COVID-19 going to need medical treatment for the remainder of their life through medications or through occasional checkups, yearly checkups? I don’t know,” he said. “But if they do … then the workers’ compensation insurance company is on the hook.”

Workers’ comp insurers may have to raise rates because of uncertainties such as these, said Steven Weisbart, chief economist of the Insurance Information Institute, an organization with more than 60 insurance company members providing data and studies.

The institute is getting reports of people having long-term health issues affecting multiple organs, from the lungs to the brain.

“The long-term issues are absolutely unclear,” he said. “That’s a potentially big-dollar area.”

Babcock, the Colorado attorney, said he hopes some insurers are rejecting claims simply because they have not had the time  — they have 20 days in Colorado to make a decision — to investigate the validity. The rejection can buy them more time to interview the worker and others to find out if there are any obvious reasons to continue to fight the claim — a spouse got it first, for instance, or it was not prevalent at work.

In Oregon, most claims have been accepted even in the absence of a law or a regulation for COVID-19 patients, Jennifer Flood, the state ombudsman for injured workers, said.

But she said that many workers with potential claims haven’t filed them. Workers’ comp insurers told her they had not received claims from workplaces where there had been known clusters.

“I believe that workers are thinking, ‘Well, the flu isn’t covered if you get the flu at work,’” she said. She believes from anecdotal evidence that the lack of claims is a combination of workers believing they don’t have a right to file, and employers telling them they don’t.

The families of undocumented workers may also be reluctant to file claims, she said, even though they are entitled to workers’ comp benefits.

In the case of deaths, unlike illnesses covered in part by medical insurance, the workers’ comp system may be the only source of compensation. These cases can pay upwards of $1 million depending on the state, according to one law firm.

In most cases, workers whose claims have been denied have little recourse outside the workers’ comp system, created a century ago to allow workers to get quick help while employers avoided costly lawsuits.

It’s a high bar, but workers can sue in certain circumstances — for instance if the employer was recklessly negligent or put workers at risk on purpose. A few such lawsuits have already been filed alleging that workplaces failed to take steps to protect workers against COVID-19 infection.

Meanwhile, in New York, Licin hopes the state Senate will move forward with the stalled bills that would help her sister, who is now back home, get her case accepted by the workers’ comp insurer. LeRoy’s case is scheduled for a hearing in September.

“It’s unfair on so many levels,” Licin said. “Obviously, I know insurance companies won’t be happy. But these are people that had to go to work.”

This story was produced by FairWarning (www.fairwarning.org), a nonprofit news organization based in Southern California that focuses on public health, consumer, labor and environmental issues.