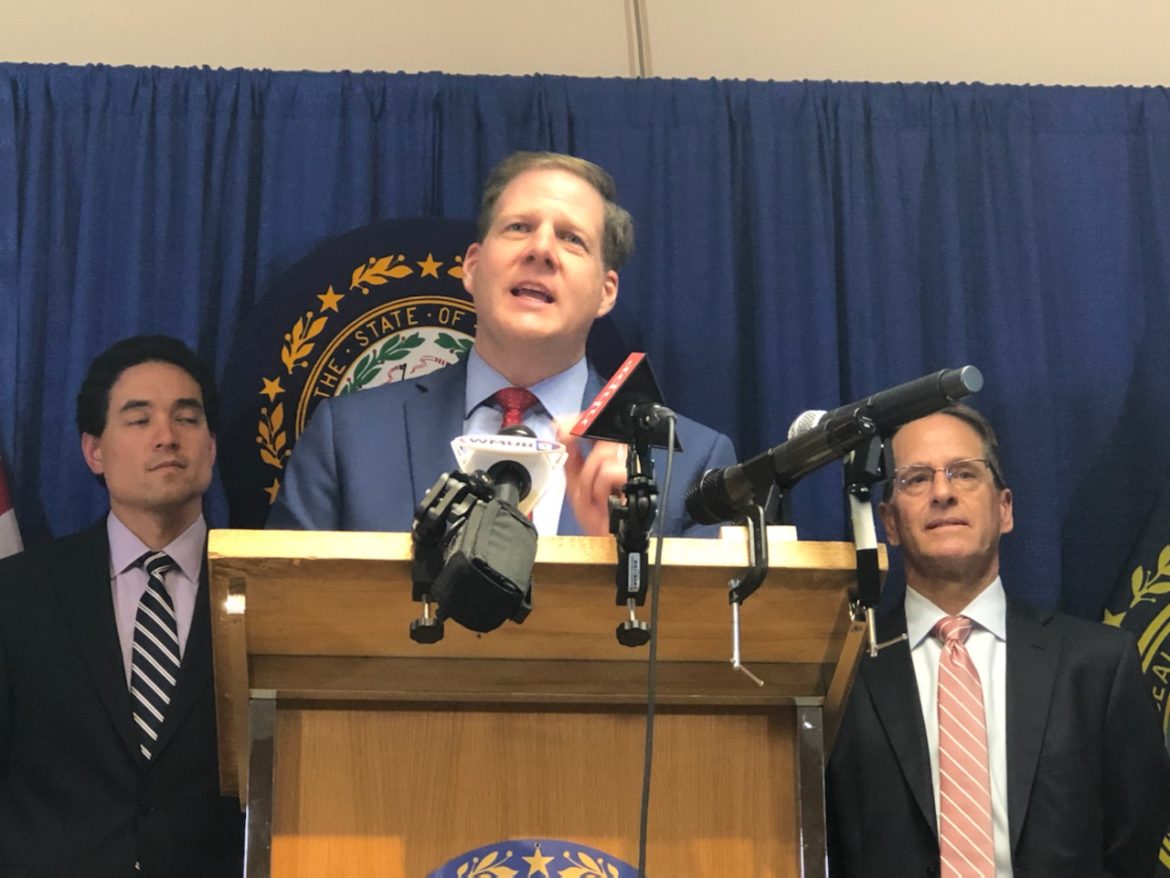 Gov. Chris Sununu speaks at a news conference in March of last year in which he closed all schools in New Hampshire. State Epidemiologist Dr. Benjamin Chan, left, and Education Commissioner Frank Edelblut are behind him.

CONCORD – Democrats on the Executive Council peppered Republican Gov. Chris Sununu and Education Commissioner Frank Edelblut with questions on the statewide guidance on reopening schools, the lack of mandate for masks and the costs to provide a safe environment and who would pay.

During a remote meeting by phone Wednesday, Executive Councilor Andru Volinsky, D-Concord, asked Sununu and Edelblut about the state guidance that was released Tuesday for schools that does not mandate wearing masks in the classroom or require all schools to reopen in the fall.

Volinsky asked if the guidance document went back to the task force that worked on the plan before the governor’s announcement and Edelblut said it did not but that was not the role of the task force to provide a finished product.

Volinsky asked Edelblut if the STRRT commission was able to see the document before it was publicly rolled out. He said the task force was a 60-member committee which generated a vast amount of data related to reopening schools under COVID-19.

Edelblut said an existing contractor within the department named AIR worked to bring the document together, and much of the drafting was done by the Department of Education.

After the meeting, Volinsky said it took 10 minutes of questioning to get Edelblut to admit that the Sununu Administration’s school reopening plan was written by a consulting firm hired by President Trump’s U.S. Secretary of Education Betsy DeVos.

“It took me ten minutes of questioning to get a straight answer from our Education Commissioner,” Volinsky said. “The ultimate answer is the STRRT committee did not review this guidance document—it was never presented back to them. They put together a 2-3 page top-level, ten-item, skeletal outline of some issues and then Frank Edelblut took those and used a consulting firm that Betsy DeVos put in place called AIR to draft the school reopening plan.”

“This Sununu-Edelblut-DeVos agenda document abandons the state’s responsibility to ensure a safe return to schooling,” stated Volinsky. “The state should provide funding to ensure schools can meet PPE, social distancing, and air quality requirements, mandate mask wearing in schools, and begin to strategize about remote learning when the virus requires we once again close schools.”

“The purpose of the task force….was to be able to take a vast amount of information and to create a framework…so the purpose was not for the task force to write the report,” Edelblut said.

Volinsky, a Democratic candidate for governor, described potential conflicts among districts without a statewide mandate on masks and Sununu said they would work things out like they always do. Sununu said school reopening guidance urges mask use but it does not mandate it and that it would be practically unenforceable.

He said he welcomed local districts to make such a mandate.

Volinsky gave the example of Concord where some students go to the Merrimack Valley School District. What if Concord required masks but MVSD did not? They would work it out, Sununu said.

Councilor Debora Pignatelli, D-Nashua, said she thinks remote learning this past spring was an utter disaster and “everyone is looking forward to getting back to classrooms.”

But she said: “I am wondering where the money is going to come from” to disinfect the classrooms and school buses every day and she worried that local taxpayers would have to pick up the tab for PPE and deep cleanings.

Sununu said there is $44 million in federal money distributed to schools to deal with COVID-19 and there might be more available.

“That buys a lot of masks and hand sanitizers,” Sununu said.

Sununu said he did not see finances as an impediment and added that more money could be available either through money not yet distributed through the CARES Act or a new federal stimulus that is being considered in Washington.

“That is going to be a drop in the bucket,” Pignatelli, a Democrat, said of the $44 million. “It is going to require a lot more than that,” she said.

Pignatelli said she realized that some areas of the state where COVID-19 has not been experiencing much community spread might not face the same dilemma as Nashua, which has been comparatively hard-hit, as has the southern tier of the state.

“I am concerned about the local property taxpayers and what they will be asked to do…so that educators feel comfortable returning to schools,” Pignatelli said.

Sununu said if you look at the state “burn rate” of those PPE products, and combine it with federal funds available “we do not foresee funds to be the problem,” either with material availability or funding. “We still have a reserve of a couple hundred million to tap into,” Sununu said.

Pignatelli said that would be good to hear and she would relay that to her mayor and others.

Sununu answered Volinsky’s questions about adequate supply of PPE which is now being sold at the state liquor stores by the state at cost. He said the state has a supply of 7.5 million masks.

“We are in a comfortable position and the schools have been given money to buy them,” Sununu said.
Councilor Michael Cryans of Hanover, a Democrat, said there are many people who cannot afford or get masks.

Sununu said he has not heard any direct requests lately for free masks from those who cannot afford them.

Cryans said he gets more comments about mandates related to wearing masks. He said he wanted to pass that on to the governor.

Sununu said he is always encouraging people to wear masks as much as they can and noted that masks have helped keep the numbers low. The governor said the key to the school guidance is one of flexibility noting, “Every situation is different…So flexibility is one of the keys to long-term success.”

He noted some of the COVID-19 outbreaks across the country are in states that mandated masks and also in some where masks are not mandated.

Among resignations, confirmations and nominations, Rich Killion of Bow has resigned from the Community College System of New Hampshire Board of Trustees. Bruce Temple of Claremont was confirmed to the state Fish and Game Commission.

The council did not take up the governor’s nomination of Scott Mason to the position of executive director of the Fish and Game Department. Kassandra Ardinger and Gregg Tewksbury were nominated to the University Systems of NH Board of Trustees.

Volinsky asked who would be the point person for developing a plan to distribute vaccines for COVID-19 once one is developed. He said he is hearing there would be two applications of the vaccine required, potentially for 1.3 million residents and that it might be ready as early as late winter.
Sununu said Commissioner of Health and Human Services Lori Shibinette could brief the council on the next meeting but Volinsky said it could hold off until September.
“I just want to get it on the radar,” Volinsky said.

Republican Executive Councilor Ted Gatsas of Manchester said he wanted to know about reports of child abuse that keep going down and his concern that cases must be going up due to the pandemic.

Joe Ripson, of the state Division for Children Youth and Families, said the numbers are getting consistent with what the state normally sees in the summer. “I do expect in the fall that it will be a little better than it was in April when there was a steep drop,” in the reporting because there was no school.

“Nothing replaces the availability of a teacher to have eyes on a kid on a daily basis,” he said. “But we are moving in the right direction.” Unfortunately, children are still being removed from their homes because they have to be protected, Ripson noted.

The council confirmed three contracts with Harbor Homes Inc. of Nashua to provide transitional housing, mobile crisis services and recovery centers.
Councilor Russell Prescott of Kingston, a Republican, said the state has been concerned about the financial health of Harbor Homes.
“We have been having shorter time frames for contracts with Harbor Homes under concerns of financial stability,” he said, and wondered why one contract for $4.5 million to develop infrastructure and provide program support to a growing number of Recovery Centers statewide through June 30, 2022 was two years longer. The other two contacts passed easily at four months in length. Volinsky recused himself from voting on those three contracts.

Katya Fox, director of the division of behavioral health was asked by Prescott about the length of time on the contract.
Attorney General Gordon MacDonald at one point interrupted and said “we have crossed the line” on what can be stated publicly with respect to the contractor.

Pignatelli said she feels Harbor Homes is in a very good financial situation now and if the contract is not approved doors will close and vital services will be curtailed.

Gatsas said if it was put on the table could the department go out and sole-source with the subcontractors?

Fox said if the state were to seek 16 individual contracts there is going to be a lot lost and it might be that they would not be able to continue under the circumstances.

Cryans said he would be voting for the item and received texts during the meeting to support the contract. He said he was going to support it even before all the texts came in. Pignatelli thanked Cryans and Prescott for their votes and noted that due to that, 14 to 16 programs will not have to close as of today.

There was a late item, a $2.2 million contract for redesign of Route 1A/Hampton Boulevard in Hampton as part of the 10-year highway plan.

Cryans said there was a lot on television about Route 1A. Victoria Sheehan, commissioner of transportation, said in summer, it is very heavily trafficked. Right now due to COVID-19 the road has closed to be a pedestrian walkway.

Some of those factors may influence the final design of Route 1A in that area near the beach. “It will take a lot of public process,” Sheehan said.

The urgency for design is that it needed to be included for construction in 2024 when the 10-year plan is updated, she said. The council voted unanimously to support the contract.

Jared Chicoine, of the Office of Strategic Initiatives, answered Cryans’ questions and concerns about the timing of broadband expansion in the state in rural areas.
“It is woefully need,” he said.

Chicoine said because he is on the grading committee for contracts he could not answer but directed people to the website nh.gov.osi. where the requests for proposals are still posted and the timeline and schedule is contained in the RFP.

The council will consider meeting again face to face but the governor said he would prefer they meet under a tent somewhere. Last summer they met on a hot and humid day in Kingston under a tent.

Sununu asked to not do it under such oppressively hot weather. He suggested councilors give ideas on where they could meet.
It is traditional for the council to take summer meetings to each of the five council districts.

“I’m all for it,” Sununu said.
He said they could try one, if they have a location in mind.
“We are open to it,” he said.