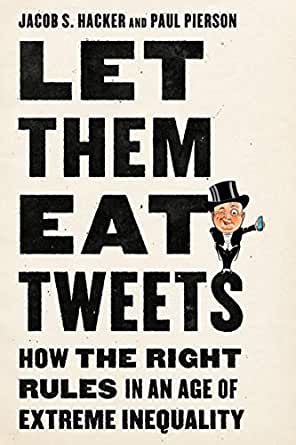 A review of Let Them Eat Tweets: How the Right Rules in an Age of Extreme Inequality, by Jacob S. Hacker and Paul Pierson, Liveright Publishing, 2020.

Members of the Lincoln Project, out to save the Republican Party from Trumpism, should look deeper than the current president’s failings, too numerous to count.  For that matter, Democrats and their allies, out to stave off authoritarianism, should look beyond Trump and the next election as well.

As Jacob Hacker and Paul Pierson see it, Trumpism sits on top of a deepening alignment between the nation’s economic elite and the Republican Party.  It is that alignment that threatens democracy and which commands our attention, they argue in their latest book, Let Them Eat Tweets: How the Right Rules in a Age of Extreme Inequality.

The clever title is no doubt intended to grab attention, but as they say right up front, the book is not primarily about Donald Trump’s style of communication.  The book is about the modern Republican Party, which in dogged pursuit of an unpopular agenda serving the interests of large corporations and the wealthy overclass has maneuvered itself into a position where it has no choice but to follow a path hostile to majoritarian governance.

They call it “plutocratic populism,” bolstered by the “3 R’s,” resentment, racialization, and rigging.

As Hacker and Pierson see it, the new perils facing our always imperfect democracy stem from “the Conservative Dilemma.”  If conservatism can be understood largely as defense of entrenched economic interests, conservative parties face a perpetual problem if they want to win support from voters whose interests don’t align with the upper class.  As the franchise expanded, the dilemma grew larger.  And as our society has become ever more unequal in recent decades, defenders of the upper class faced a bigger challenge.  Had they followed the example of British conservatives they would have moderated their policies to bring more voters into the fold.  Instead, Republicans have time after time stuck with the wealthy and adopted politics rooted in social division, especially racism, to reach for a majority.

Post-Nixon, the GOP put the welfare state on its enemies list.  Instead of a Nixonian party “that moved left on economics while moving right on race,” [2] the conservatives forgot about the interests of those Nixon had termed “the forgotten Americans.”

The rise of plutocracy is better documented elsewhere, for example in Nancy McLean’s Democracy in Chains, focused on the influence of James Buchanan; Jane Mayer’s Dark Money, examining the Koch network; Dollarocracy, John Nichols’ and Robert McChesney’s look at the impact of the Citizens United ruling; and Hedrick Smith’s Who Stole the American Dream, which traces the rise of the “bosses’ revolt” to Lewis Powell’s 1971 memo recommending a multi-faceted influence operation led by big business to counter rising popular demands.

The right-wing economic agenda was disturbingly successful, setting off organized labor’s decline, stagnation of wages for most working Americans, the rise of financial services sector, and the now irrefutable chasm between the ultra-rich and everyone else.  Republicans embraced plutocracy and haven’t looked back.  By the second decade of the 21st century, “the growing resource and power gap between the rich and the rest – and the divergent interests and commitments that came with it – would put the GOP in a tightening vise.” [3]  As the plutocrat lobby pushed Republicans further into the realm of unpopular policies (very few people really support tax cuts for the ultra-rich, for example), Republicans waded deeper into the politics of racism and resentment in order to have any hopes of winning elections.  That, in turn, meant tightening their bonds with white evangelicals, the firearms lobby, and a network of right-wing media organizations, all of which depended on racism to mobilize outrage among white voters whose class interests were of no interest to the party.

Of interest is that Trump, who boasted, “I’m really rich” on the campaign trails, did not run on a plutocratic agenda in 2016.  On health care, he said, “I’m going to take care of everybody.”  He said he wouldn’t cut Medicare or Medicaid.  He pledged to bring back industrial jobs lost to the dynamics of capitalist globalization and technological change.  And, of course, he pledged to “drain the swamp.”  Once in office, though, the plutocrats took over, with Mike Pence serving as the essential liaison with both the social right and the Koch-funded network on the economic right.  Trump’s cabinet would soon resemble an elite club, populated with the likes of Betsy DeVos, Wilbur Ross, and Steve Mnuchin, joined by a swampful of corporate lobbyists.

“What the Republican establishment wanted to do,” write Hacker and Pierson, “was not in doubt.  Over the prior two decades, since Gingrich led the GOP’s takeover of Congress in 1994, the party had pushed a consistent, albeit ever more aggressive, policy agenda design to advance plutocratic interests.  Republican leaders sought to sharply cut taxes on the wealthy and corporations, roll back expensive social welfare programs and remove irksome environmental and consumer regulations.  And they sought to install judges who would extend and protect those achievements.”  [4]

The final point deserves emphasis.  Protection of an undemocratic agenda has relied on support from the branch of government least under the influence of voters, the judiciary.  It is there where the conservatives have stealthily organized to win appointments for jurists embracing a “judicial philosophy that combines a retreat of the state on economics and the advancement of the state to protect and sometimes enforce the views of religious conservatives.” [5]

“The fundamental problem is now familiar,” write Hacker and Pierson.  “The Republican Party is ever more committed to the narrow and unpopular priorities of corporations and the superrich.  It is ever more dependent on radical surrogate groups to mobilize voters its economic policies do not help.  And among those voters, it is ever more reliant on a demographic group in relative decline: older whites without a college degree living outside urban areas, particularly older white men.”  [6]

“None of these trends is sustainable,” they state.  “Or at least none is sustainable in the context of free and fair elections and majority rule,” [7] which explains why Republicans have become so committed to gerrymandering and voter suppression.

Arguing with backing from historical examples and public opinion surveys, the two political scientists carefully lay out their case and in conclusion, provide advice on saving Republicanism from plutocracy. “The core challenge,” they say, “is finding a path that brings the conservative party into the democratic fold and encourages it to stay there.” [8]  Step One would be a decisive defeat for Trumpism, not just Trump.  Step Two would be an aggressive campaign that deals reversals to the plutocrats, rejects ethnonationalism, and addresses the economic interests of the non-plutocrat majority.

For the Democrats, that doesn’t just mean capturing some “can’t we all just get along” place in the shifting center, but actually taking progressive stands on issues like taxes, wages, health, education, and combating racism.  It may not be an easy lift, but it’s no doubt the essential one.