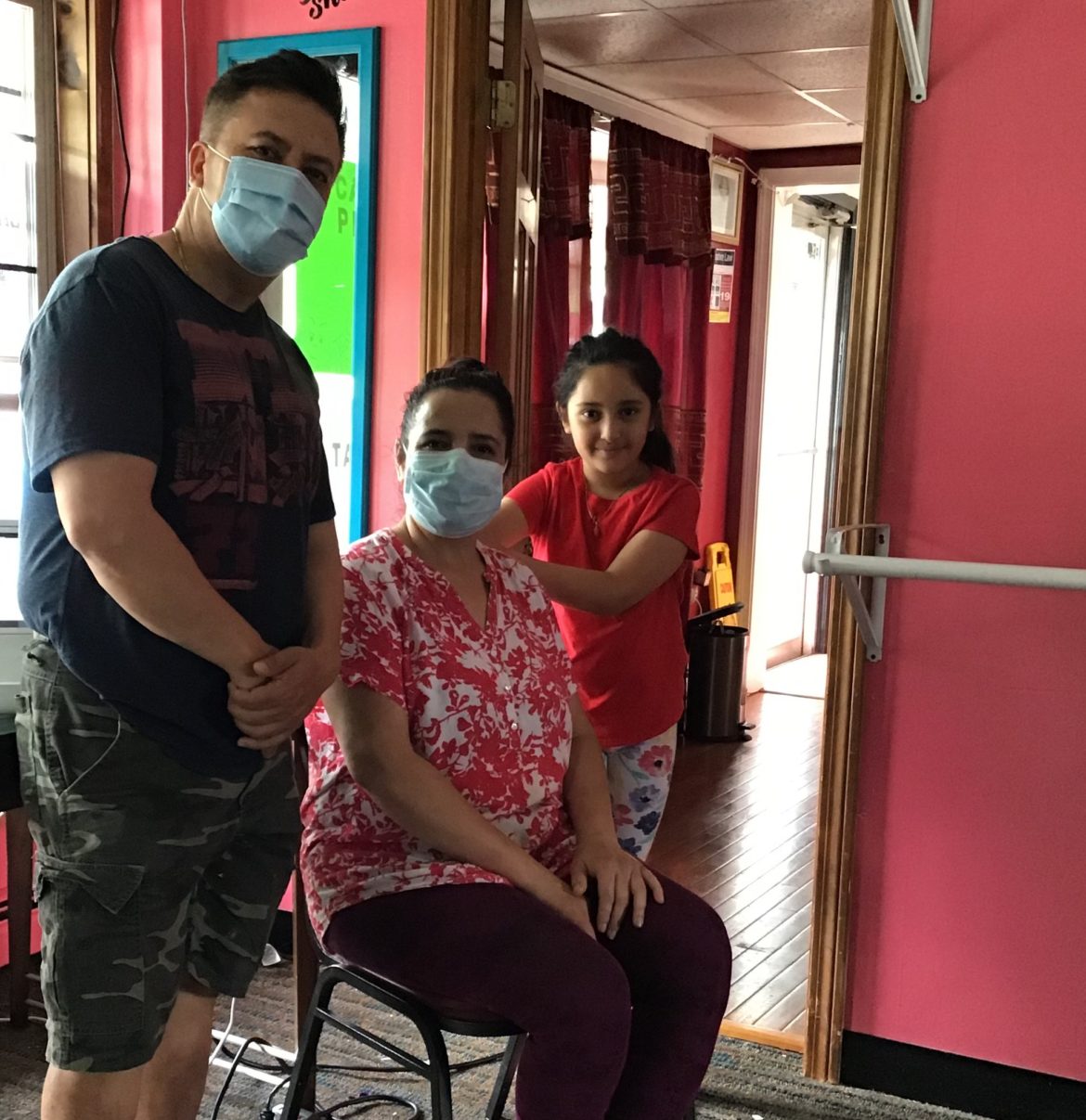 Rajendra and Uma Thapa and their daughter Sophia are pictured at Cafe Momo in Manchester.

MANCHESTER – When Café Momo’s reopened recently for takeout, the reaction on Facebook was encouraging:  “Three months with no Momo has been rough.”

According to Covid 2.0 guidelines, Café Momo, serving Nepali food at 1065 Hanover St. in Manchester, could be open for inside seating at 50 percent capacity. But it’s a small café with close, tight space. Seating people six feet apart was impossible.

Rajendra Thapa is the owner of Café Momo, taking over in early 2019.  It first opened in 2004 so it’s been here for 16 years. “People know this place,” Thapa said. He explained that the shop that had adjoined Café Momo was vacant and he could now use the space.

He could access a slide-up window in what had been Second Peek Children’s Boutique.  Through this window Café Momo opened for take out on June 23.

Café Momo serves the traditional foods of the people of Nepal. They serve sour, tangy gundruk soup made from fermented mustard greens. Momos are the famous dumpling of Nepal. You can get meat momos or ones made with paneer (a kind of un-aged cheese) and spinach, all with cilantro, finely chopped cabbage, turmeric, carrots. Momos come with a dipping sauce with a bite called achar made with ginger and spicy mustard.

Thapa was born in Lalitpur, Nepal.  “If you know Kathmandu,” he says, “it’s a valley. There are two vibrant cities. Kathmandu and Lalitpur.” (Lalitpur is also called Patan.) He describes the food at the café as authentic Nepalese and Himalayan.  The food he and his Bhutanese wife Uma serve is also the food of the many Nepali-speaking Bhutanese people who’ve settled in New Hampshire.

Some had lived in refugee camps in Nepal 20 years after their exile from Bhutan. New Hampshire’s Department of Health and Human Services reports that 1,295 Bhutanese people have resettled in New Hampshire between 2011 and 2018 from the camps in Nepal.

Rajendra Thapa’s own taste is also influenced by Tibet. The Jawalakhel Handicraft Center also known as the Tibetan Refugee Camp is in Thapa’s home town of Lalitpur.   Many Tibetans sought asylum in Nepal in the 1960s after the Chinese invasion of Tibet, and some 1,000 Tibetans settled in Lalitpur, bringing their skill in carpet weaving to the city.

“We were scared if somebody coming is sick.  [I worry for] my daughters. My wife.” At the restaurant, Thapa takes care of sales, prep, inventory, the business. His oldest daughter is also on staff.  His wife, Uma, who is Bhutanese, is the cook.  They also have a young daughter, eight years old, Sophia, who does yoga with her dad in the mornings before they leave for the café.

How was business today I asked about the first day. “Better than expected,” Thapa said. The second? “Not good.”

On Saturday, the first weekend of opening, there was good news for the café. “I don’t have time to talk. I’m busy.”

Some Café Momo customers are travelers driving up Interstate 93 heading to the mountains and lakes.  Thapa looked to see if they returned over the July 4th weekend.  He also has “permanent customers.  They come twice a week.”

He says business for his restaurant is not great in New Hampshire, not as good as it would be if the café was farther south in New England.  But he likes it here. People are respectful, he says.  He worries when customers don’t wear face masks though. He doesn’t turn them away; he needs the business.

I got a sense of Thapa’s conflict between having a good crush of people in line ordering the café’s Nepali dishes which would be great for business, and his worry about his own health, that of his family, and the health of too many people close together in line without masks.

He’s very certain about what the café is to him and his family.  “I want to be best. To get best. The café, it’s my everything.”

I call on the July 4 holiday. “How is business?”  Uma Thapa tells me, “Quite busy! Please come back anytime. We are cleaning.”

Terry Farish is a writer and novelist living on the Seacoast. She has written widely about contemporary immigration. Please contact her with ideas for immigrant and refugee stories, under-told stories, and stories that may not yet be part of the narrative of New Hampshire. She is especially interested in teen stories. tfarish@gmail.com