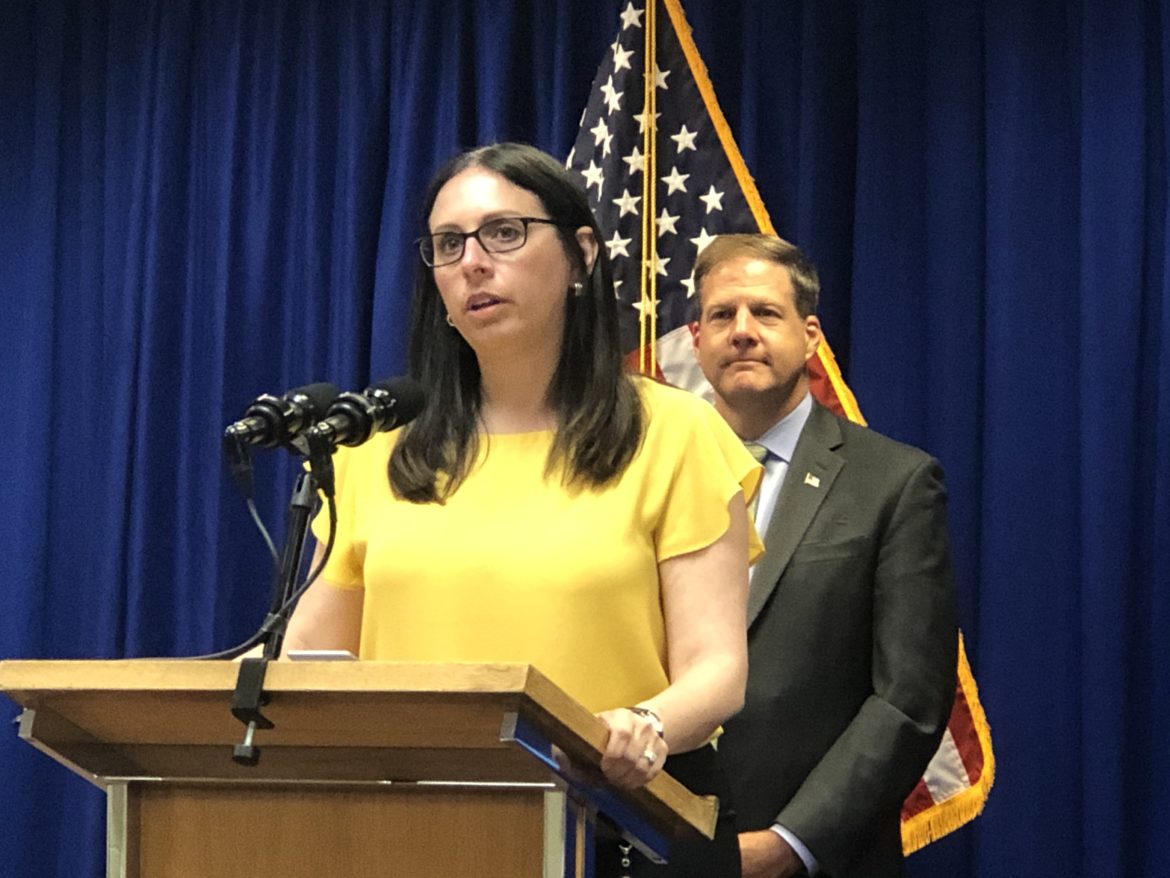 Health and Human Services Commissioner Lori Shibinette is pictured speaking recently at Gov. Chris Sununu's news conference in Concord with the governor pictured behind her..

CONCORD – Gov. Chris Sununu announced an additional $35 million for those facing eviction or who cannot pay their past utility bills due to the novel coronavirus while a testing effort in nursing homes statewide has caught 15 asymptomatic cases.

The news came at his regular Tuesday press conference on a day when four additional people were reported to have died in New Hampshire from COVID-19 for a total of 371 people. The most recent deaths were all residents of long-term care facilities.

Dr. Benjamin Chan, state epidemiologists, and Sununu stressed the need for “individual responsibility” to wear masks and maintain social distancing, noting that in one week more than 1 million new cases of the virus have been diagnosed across the world. There are now to 10.3 million, with outbreaks in Asia and in the U.S. in the southern and western states contributing to 2.6 million cases.

Sununu noted much of that surge has been among younger adults and noted that he is concerned about the late-night bar scene. He said it is possible he could limit hours to help stop the spread of the virus.

Health and Human Services Commissioner Lori Shibinette acknowledged a New York Times article Sunday showing New Hampshire has the highest percentage of deaths in nursing homes, but she noted that other data points need to be looked at to show that the state has not lost as many residents as a percentage of the total in those homes.

Evictions
A moratorium on evictions ends July 1 but Sununu said he wants to provide an “offramp” to help renters with $35 million more in federal CARES Act funds.

He announced two components of that fund that go live Tuesday: One-time grants for households that suffered a limited short-term loss impacting an ability to pay a mortgage or rent. He urged people to dial 2-1-1 to get help or to go to capnh.org or one of five regional CAP agencies around the state.

Also, effective July 15, a current moratorium on utility payments will end. He said he is also making those funds available to “help bridge the gap.”

New Cases
New Hampshire reported 22 new cases of COVID-19 Tuesday totaling 5,782. There are no new hospitalizations and none in the past two or three days.
There have been 120,000 of the state’s 1.3 million people tested and “overall, our numbers continue to show a good trend.”

About 2 to 3 percent of those tested are positive for the virus and that has been stable for the past couple of weeks, Chan said.

“Honestly I think we are all feeling tired of this pandemic,” Chan said. But he urged people to remain vigilant, wear their masks.

Sununu said he keeps a mask in his coat pocket, around the gear shift in his car, and in his house there are at least three or four his wife has for everyone’s use.
Chan also urged everyone to get tested.

“The main way we are going to control (the virus) is to continue to follow social distancing,” Chan said.

Three long-term care facilities were removed from the list of institutions with outbreaks of three or more cases. Mount Carmel Rehabilitation and Nursing Center in Manchester, The Courville in Manchester, and Crestwood Center in Milford are now no longer facing outbreaks, Shibinette said.

She pointed to good news in a new nursing home surveillance program in which the company Mako tests staff and residents on revolving basis found 15 asymptomatic cases involving 13 staff and two residents in 10 nursing homes. Those individuals have been separated from the population.

“It is working,” Shibinette said. “It helps us catch it early” and it will lessen the amount of transmission.

The state has lost 2.2 percent of its long-term care residents, she acknowledged, but Rhode Island has lost 12 percent and Massachusetts 8 percent of their nursing home residents.

Of the $30 million allocated to help health-care facilities impacted by the virus, 68 total awards have been granted so far totaling $10,817,745. Sununu said more money would be distributed and announced 134 health-care organizations are receiving supplemental funds totaling $8.8 million.

Of the 26 hospitals in the state, eight are receiving funding primarily in the south. They are Catholic Medical Center, Elliot Hospital, Huggins in Wolfeboro, Memorial Hospital, Monadnock Community Hospital, Southern NH Medical Center, St. Joseph’s Hospital and Wentworth-Douglass. There is still money available, he said.

The state’s budget has also taken a hit from COVID-19, Sununu said. About 20 percent of the state’s discretionary budget or about $540 million is expected to be lost due to lost revenue, he said.

“It’s severe, really it is,” he said, noting the shortfall is expected to be $182 million for FY 2020 and $355 for FY 2021. Hopefully, he said, Congress might provide not just stimulus relief, but revenue relief and still maintain the federal portion of the state overall budget.

“We’re not going to be increasing taxes,” Sununu stressed. He said he hoped it would not lead to layoffs of state employees but added he was not promising anything.

“This is a big hill to climb,” Sununu stressed. “It is going to make us sit down and really crunch the numbers.”

He said he has instructed all departments to eliminate discretionary spending, put a hold on projects for now, and continue a hiring freeze with some seasonal exceptions.

Sununu said he is likely to support a bill allowing people to get absentee ballots due to COVID-19, but he was unsure until he reads the final versions on a number of other COVID-19 related bills passed Tuesday in the House.

He did say he supports extending telehealth into the future calling it “an awesome resource.”