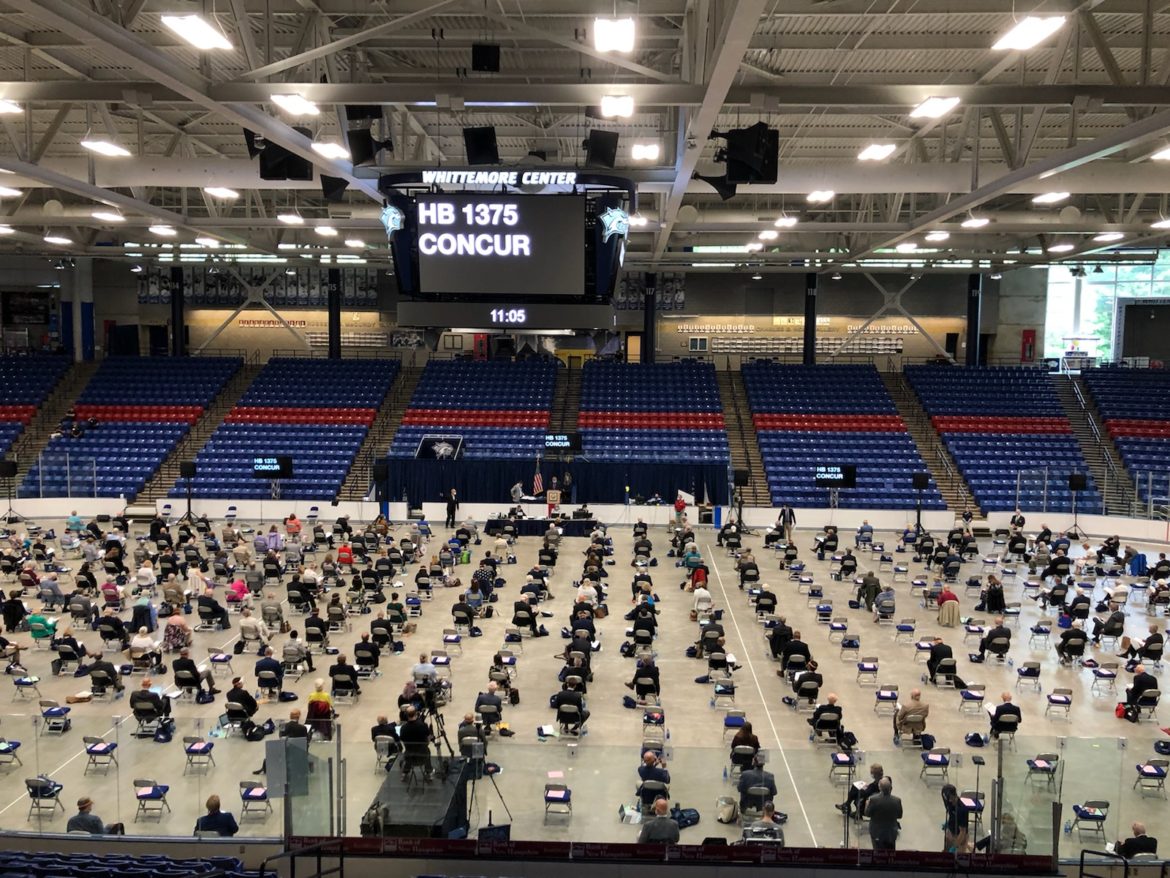 The House of Representatives met at the Whittemore Center at UNH on June 30 in this file photo.

DURHAM — The House approved a number of omnibus bills created by Senate committees around topics like workers protections, criminal justice reforms, child protection, sexual assault and transportation Tuesday on the last day of the 2020 session sending the bills to the governor.

The House had about 35 bills it had to approve or vote down, but could not change.

The 35 bills contained the content from over 200 House and Senate bills after House Republicans two weeks ago refused to agree to change deadlines so the House could act on its remaining bills and Senate-passed bills with a simple majority, claiming they were boxed out of decisions on the final work of the House.

Without the change in deadlines, a two-thirds majority vote is needed, which without Republican support, effectively killed the bills the House had yet to take up.

The Senate crafted many of the omnibus bills with both Democratic and Republican input to save some of the bills that would have died without the deadline change. The House only needs a majority to agree to the Senate changes to House bills and send them to the governor.

Only one omnibus bill was killed by the House during the six plus hour session. The bill dealt with changes in state licensing statutes.

During the session, Republican members questioned the process used to combine the bills into omnibus packages saying it violated House rules, the right-to-know law, the requirement for a House hearing and the state constitution,

A number of the bills addressed the coronavirus pandemic such as long-term care and nursing home facilities, allowing pharmacists to administer a COVID-19 vaccine after one is developed, insurance parity for telemedicine, giving cities, towns and school districts flexibility for annual meetings and budgets, expanding broadband throughout the state, and allowing absentee voting for any reason.

Also the bills would require a law enforcement officer to report misconduct by another, to prohibit police from using chokeholds unless in an emergency, raise the smoking age to 21 years old, allow unmarried adults to adopt children and establish a dental benefit for adults on Medicaid.

And they approved controversial bills on abortion rights, raising the minimum wage and requiring companies that have released toxic chemicals into the environment to pay for medical monitoring for people exposed through no fault of their own.

An omnibus criminal justice bill would require police officers to report misconduct by fellow officers and prevent chokeholds like the one that killed George Floyd in Minneapolis.

The bill would also require future police officers be screened for psychological stability and substance abuse.

The bill also forbids the state from using private prisons to house inmates.

The bill also changes some of the provisions of the bail reform law approved last session, addresses other concerns about pretrial detention and provides a good Samaritan provision for reporting an emergency alcohol-induced situation if the person is under 21 years old.

The House approved two bills dealing with sexual assault, one dealing the public schools and an incident that occurred in the Concord School District, and the other applying to colleges and universities.

House Bill 1240 expands the definition of felonious sexual assault to include sexual contact between school employees and students, and when the perpetrator is in a position of authority and the victim is between 13 and 18 years of age.

The bill also addresses the issue of coercion and predators grooming their victims.

The other bill, House Bill 705, includes the provisions concerning sexual assault on colleges campuses, requires colleges to report incidents of sexual assault, develop policies concerning contact between professors and students and requires the policies be shared with students.

Cushing called the bill an amazing piece of legislation, saying it also expands protections for crime victims and removes the statute of limitations on civil sexual assault cases allowing child victims of sexual abuse and incest to come forward later in life.

The bill does not change the statute of limitations for criminal charges for sexual assault or incest.

Rep. Werner Horn, R-Franklin, claimed the bill is an “egregious attack on the sanctity of marriage” and intimacy between spouses if one suffers from dementia.

Opponents called the bill an affront to their religious freedoms and their beliefs in the sanctity of life.

Rep. Walter Stapleton, R-Claremont, said it was “voodoo legislation” to make abortion a maternity benefit, when the state should be protecting all lives.

The state does not have its own minimum wage and instead uses the federal threshold of $7.25 per hour.

The House agreed with the Senate the state should increase the minimum wage to $12 an hour over the next three years.

Rep. Jack Flanagan, R-Mason, said raising the minimum wage at this time would lead to outsourcing, automation, reduced benefits and hours, and layoffs. He said increasing the wage will put some small companies out of business.

But Rep. Brian Sullivan, D-Grantham, said it would help essential workers on the frontlines of the COVID-19 pandemic like grocery store workers who staff the checkouts and stock shelves.

“This would benefit the folks risking their health and their lives to take care of us,” he said.

Gov. Chris Sununu is expected to veto the bill as he has other minimum wage bills.

The Senate approved a bill that would study what happened at long-term care and nursing home facilities where more than 80 percent of the COVID-19 deaths have occurred, as well as money for child care scholarships, programs for the homeless and a housing subsidy program for renters and homeowners affected by layoffs and job losses due to the pandemic.

Rep. Mark Pearson, R-Hampstead, said many things covered in the bill have already been addressed by Sununu and his office for emergency relief and recovery, including money for nursing homes. He said an independent study of what happened at long-term care facilities is not needed as the state is doing a good job of protecting those residents.

He claimed the bill would spend CARES Act money illegally.

But Rep. Polly Campion, D-Etna, disagreed and said the state needs to know what happened at the nursing homes and long-term care facilities that have been hit harder than any other area in the state.

She said problems still exist at many of the homes struggling to provide personal protection equipment for their workers, outstripping the state’s ability to help.

One silver lining of the coronavirus pandemic is a revolution in telemedicine that extends beyond physical health care, several supporters said.

Opponent Rep. John Hunt, R-Rindge, claimed the bill would be a nice payday for hospitals and doctors who would receive the same amount of money if they see a patient in person or “take a call from their boat.”

But Campion said the bill would continue the essential services provided during the pandemic.

A bill that caps co-pays for insulin and seeks to reduce the costs of prescription drugs also was approved by the House.

Rep. Ed Butler, D-Hart’s Location, called it “an incredibly good, powerful bill that will impact prescription drug prices in ways we’ve been working on for over several years.

The plan includes the content of about a dozen separate Senate and House bills that address a number of concerns raised about child abuse with school closings and stay-at-home orders, as well as long-standing issues like parental reimbursement for court-ordered services for juveniles.

The bill establishes a new school disciplinary system that would use suspension or expulsion as a last resort and establishes a multi-tier system for mental and behavioral health services for students.

The bill also expands the oversight of the Office of the Child Advocate.

The House approved a bill that provides greater unemployment benefits, a death benefit for families of public workers killed doing their jobs, would require the state to follow federal Occupational Safety and Health Administration requirements, increases the time firefighters would have to claim workers’ compensation for heart and lung damage, allows individual bargaining units to negotiate their own collective bargaining agreements, and allows union certification when a majority of workers file written authorization.

But supporters said at a time when workers are carefully returning to work, it provides additional safety measures so workers can be more comfortable.

The bill also provides unpaid family and medical leave for workers who have contracted the virus or have family members who have.

The House approved a bill to extend protections to renters and homeowners who face eviction or foreclosure because they are unable to pay their rent or mortgage due to the COVID-19 epidemic.

Under the bill, once the current moratorium ends today, renters could not be evicted unless a landlord offers a six-month repayment package to recoup the unpaid rent.

Supporters said the bill would provide baseline protection for homeowners and renters and help to prevent the de-stabilization of the housing market.

There were objections to a provision allowing people living in rooming or boarding houses to claim them as residences giving the renters additional rights to avoid eviction.

The children of totally and permanently disabled veterans will be able to attend state colleges and universities tuition free under a bill approved by the House.

One of the lessons from the COVID-19 pandemic with the closing of schools and people working from home, is the limits of the broadband coverage in parts of the state.

The House approved an omnibus bill to expand broadband access throughout the state, particularly in rural areas. The bill would allow communities to establish communications districts, provide bonds to increase access, and map the current broadband map.

If a broadband company does not respond to a community’s request to upgrade its system in two months, a town could engage another provider.

Clean drinking water is essential, Cushing told his fellow House members, after several opposed a bill to create a remediation fund to clean up PFAS (perfluoroalkyl substances) contamination. The House also agreed to extend the Commission on the Seacoast Cancer Cluster Investigation and establishing a PFAS fund.

“We are talking about cleaning up drinking water,” Cushing said. “We can’t wait any longer.”

Supporters believe a lawsuit against polluters will eventually reimburse the fund in the future, allowing the bonds to be retired.

The House approved a bill for a dental benefit program for adults on Medicaid. The state has a children’s dental program but not one for adults.

Opponents said the state is not in a financial position to pay for the benefit, but supporters said it will pay for itself in the long run by reducing emergency room usage.

The House will not meet again until members return this fall to vote on gubernatorial vetoes. The governor is expected to veto several of the bills approved Tuesday including raising the minimum wage, and the two worker protection bills.