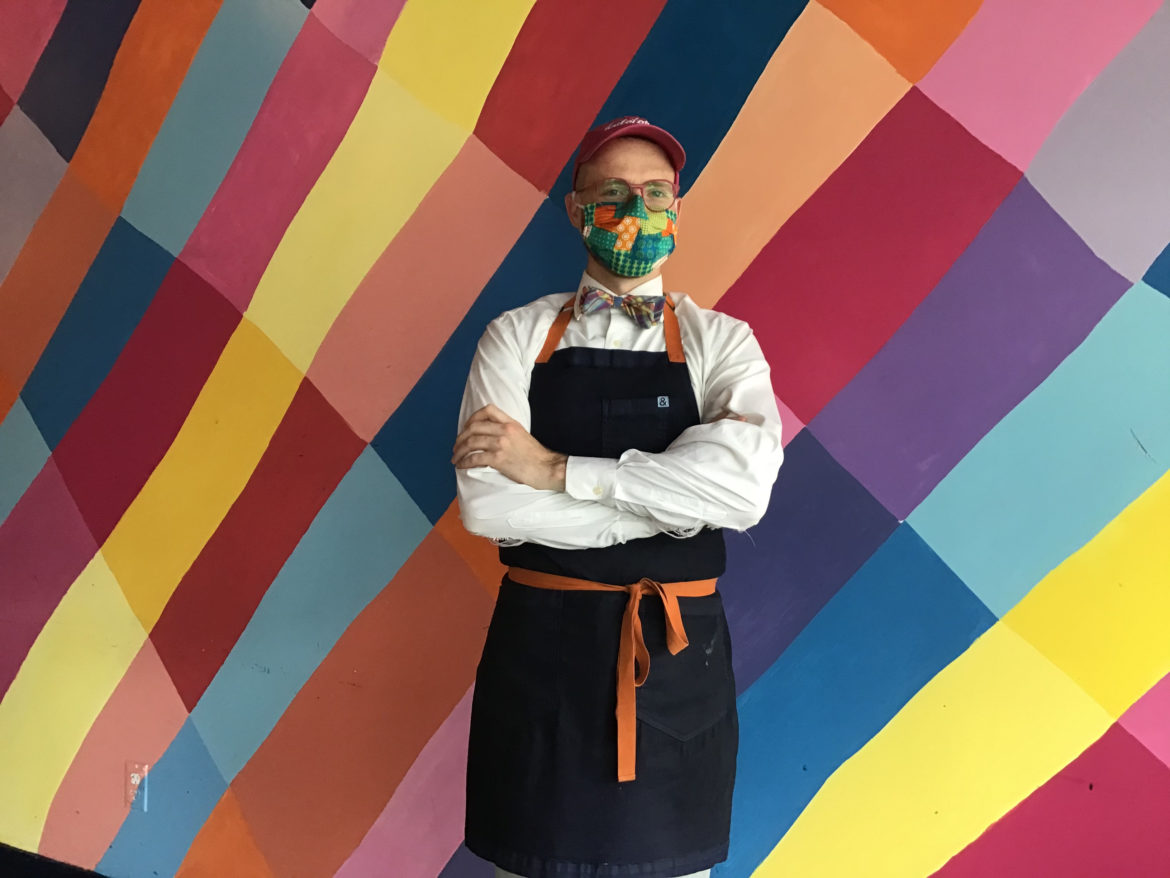 Emmett Soldati is the owner of Teatotaller Café in Somersworth with a second café opening soon in Concord. He’s a community activist and is running for a seat on the New Hampshire Executive Council, District 2.

It’s Pride month and Teatotaller is a celebration of Pride. Soldati also celebrates Somersworth, “a place they said would get you nowhere,” Soldati said he heard when he was a kid growing up here.

But after leaving town, Soldati returned to Somersworth, then a city with a growing community of Indonesian families. Here he opened Teatotaller celebrating LGBTQ+ Pride and the city, including its growing diversity.

Picture this, as Teatotaller is shown on Instagram – “Queer hipster oasis of tea, coffee + pastry goodness.”

#Bubbletea #avocadotoast #teenqueen #somersworth #burlesque, also red velvet waffles, baking kits to bake scones for your mom, and now in the coronavirus era, “we deliver boba to your doortstep.”

The Teatotaller’s vibrant community of birthday parties, bridal showers, inclusive storytimes, teen drag shows with 50+ teens (“mostly straight”) in the audience is otherwise shut down during the global pandemic.

Street celebrations of the LGBTQ+ Pride Month in the state are also shut down. But Soldati with Rochester City Councilor Palana Belken held a Pride Town Hall, a zoom kick off of LGBTQ+ Pride Month. Belken told me, “It’s unfortunate we can’t physically gather,” but meeting remotely made this a state-wide event bringing together people from different regions of the state for the first time.

“There were state reps and teen activists.” Rep. Ed Butler joined in the Town Hall from Hart’s Location.

Soldati said, “Connections were made, so members aren’t siloed.”

Later in the zoom Town Hall, they remembered songs they would have sung if they’d been able to gather. “Songs from the 70s,” Belken said, ‘In the Navy’ and ‘I Will Survive.’ And also ‘Old Town Road,’ a Bible song. I heard that last year everywhere.”

It was also the month of profound grief and rage and protests in the wake of the killing on May 25 of George Floyd, a black man, in Minnesota by a white police officer who is charged with second-degree murder. I wanted to talk to Soldati about the protests. What did it tap into for him as he recognizes Pride Month?

He and Belken both told me the Pride Town Hall opened the day by holding space for Black Lives Matter protestors. They held moments of silence in recognition of protests being held around the world calling for justice for George Floyd.

So what do the Pride folks do in their solidarity? “Pass the microphone,” Soldati said more than once. He seems to chew on the conversations in his feed and the worry he hears among activists. “We don’t have the people being tear gassed here. How do you be an activist living in a space not confronted (as in Black communities.) It feels embarrassing.”

“White activists feel anxiety. People ask, do we speak up, or not? I’ve felt that anxiety. We worry we’re not going to get it right. We keep searching for the right way to offer solidarity. We’re worried we’ll perform activism incorrectly. This is part of white people’s journey to be a white ally. But I don’t think it should be easy for white activists.”

He said the Pride community needs to build and support platforms for Black people. “Maybe we’re invisible and pass the microphone. We need to elect more people of color, I say as someone running for office.”

“Pride Month began as a riot to fight for recognition of rights. We need to honor Pride as a protest, showing up for all oppressed people.”

The first time Soldati and I talked, it was by phone. The next time, we met masked at Teatotaller on Somersworth’s High Street so I can get a photo. The street is quiet. Up past the VFW, Leroy’s Styles is open. At Teatotaller’s doorstep is the offer – “Doorstep Boba, Bubble Tea, Free Delivery, x2 Week.”

He says today several employees have been preparing delivery orders. Business has been good. He stands by a wall painted with ribbons of color, a backdrop for many Teatotaller events and photos. He’s funny and easy as he tries on different poses.

A reporter called his crossed arms pose his “Supreme Court pose.” (In March, Soldati argued in a suit he himself brought against Facebook in the New Hampshire Supreme Court. He had sued Facebook because they took down the café’s Instagram account without legal obligation to offer cause.

As of this date, he’s awaiting the ruling. He rebuilt Teatotaller’s Instagram.

I asked about words of support he’d offer LGBTQ people living in more rural areas who may feel isolated. He says, “New Hampshire is filled with queer people and allies. If someone raises a flag, people across the state have found allies.

“For example when I opened Teatotaller, I was told it wouldn’t last a year. Not true. People rallied. It revealed a myth about New Hampshire. We saw shared experience.”

Terry Farish is a freelance writer and novelist living on the Seacoast. She has written widely about contemporary immigration. Please contact her with ideas for immigrant and refugee stories, under-told stories, and stories that may not yet be part of the narrative of New Hampshire. She is especially interested in teen stories. tfarish@gmail.com