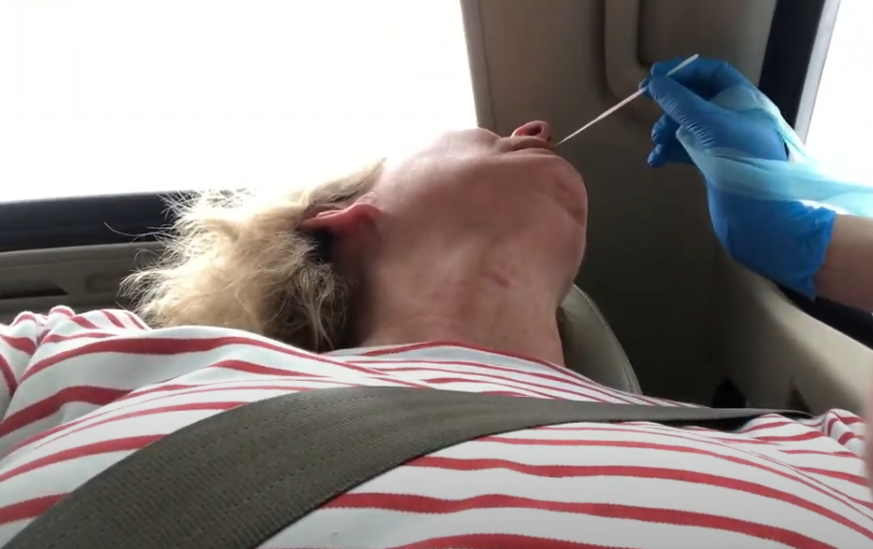 PLYMOUTH – I joined more than 80,0000 other New Hampshire residents and took a COVID-19 test to determine if I am asymptomatic before returning to reporting for InDepthNH.org at the State House.

The process was simple, quick, invasive, uncomfortable and I am still awaiting results five days later.

I went to the National Guard Armory in Plymouth on Sunday where soldiers administered a nasopharyngeal swab test up through both nostrils of the nose.

As President Donald Trump has said, it is not something you want to do every day. I can agree with him on that.

Last week, Gov. Chris Sununu announced the ASAP Testing program and urged everyone to get an appointment because the data, he said, is important.

With each test taken, it reduces the overall percentage of positive cases of COVID-19 in the state. Two weeks ago, it was at about 5 percent and now it is ranging between 2 and 3 percent with another 10,000 tests administered.

I live in Center Harbor where there have been zero cases. And I have not left my home for more than a trip to the grocery store or the hardware store since March 17.

Because scientists believe you can be asymptomatic and still spread this deadly virus, and I am returning to in-face work next week at the State House, where many are over the age of 60, I decided to give it a go.

It was five seconds of discomfort similar to the feeling you get when you breathe in water, and it made my eyes tear up. I had a bit of bleeding into my throat and mouth which I read is not uncommon.

I was told I would have the results in two to four days.

Now, on day five, I just got the results that I am negative as I get ready for next Tuesday when I return to cover to New Hampshire Senate at the State House.

The process began on Saturday afternoon with me Googling “NH COVID-19 Testing” and it came to a state website where a list of test locations was presented and I was asked to pick my top three. The next set of questions asked me my top three choices for time.

In seven minutes, I received a message on my cell phone from a person who said I had my first choice location and time: Plymouth National Guard Armory at 3 p.m.

Arrival
I arrived in my car, wearing a face mask as requested and gave my name to the National Guard Reservist. I was the only customer at the time of my appointment.

They directed me to pull my car around to the back of the building where reservists held a bag full of testing swabs and information, verified my identity by name and date of birth and directed me forward where another reservist in full PPE gear with gloves, gown, and head protection stood by my car window.

He asked me again to confirm my identity and then explained the process.

I handed him the bag and gripped the steering wheel. I recommend gripping the steering wheel.
He handed me a tissue before the procedure and I tipped my head back as he inserted the long Q-Tip like object up through my left nostril.

He allowed me to take a second before the second swab was inserted in my right nostril.

I used the tissue to wipe the involuntary tears from my eyes and later, as I drove off down the road, to collect the small amount of blood that appeared as I looked in the rearview mirror at my tongue.

While there were moments where I felt the process to be invasive, after the test, there was no real impact other than my nostrils were a bit tender and I found myself rubbing my nose more than usual.

To get the results, I had to create an account with the testing company, Quest Diagnostics, online. I logged on Thursday morning and to get into my account I was asked a number of questions that startled me.

One was about past employment. Pick among five companies that I was once employed. The second was harder. It was about the type of vehicle I owned in the past. I forgot I once owned a 2002 Land Rover Discovery. I remembered in the time given.

But when I went to push the button for “results” it said “no test results.” The test cost nothing.

I have a very limited health insurance plan, pretty much a catastrophic plan, but they say most insurance covers the test.

I did not fill out any information for the insurance and still got the test. The feeling I have is that I have done my part to protect others from me.

Even though I tested negative, I will still wear a mask and I will still stay far away from people when I am out covering the news or buying milk, and I will continue to wash my hands regularly for you and for me.

And I will know what it feels like to have a nasopharyngeal test. Momentarily uncomfortable, but not awful.

To get yours, go here https://business.nh.gov/DOS_COVID19Testing/