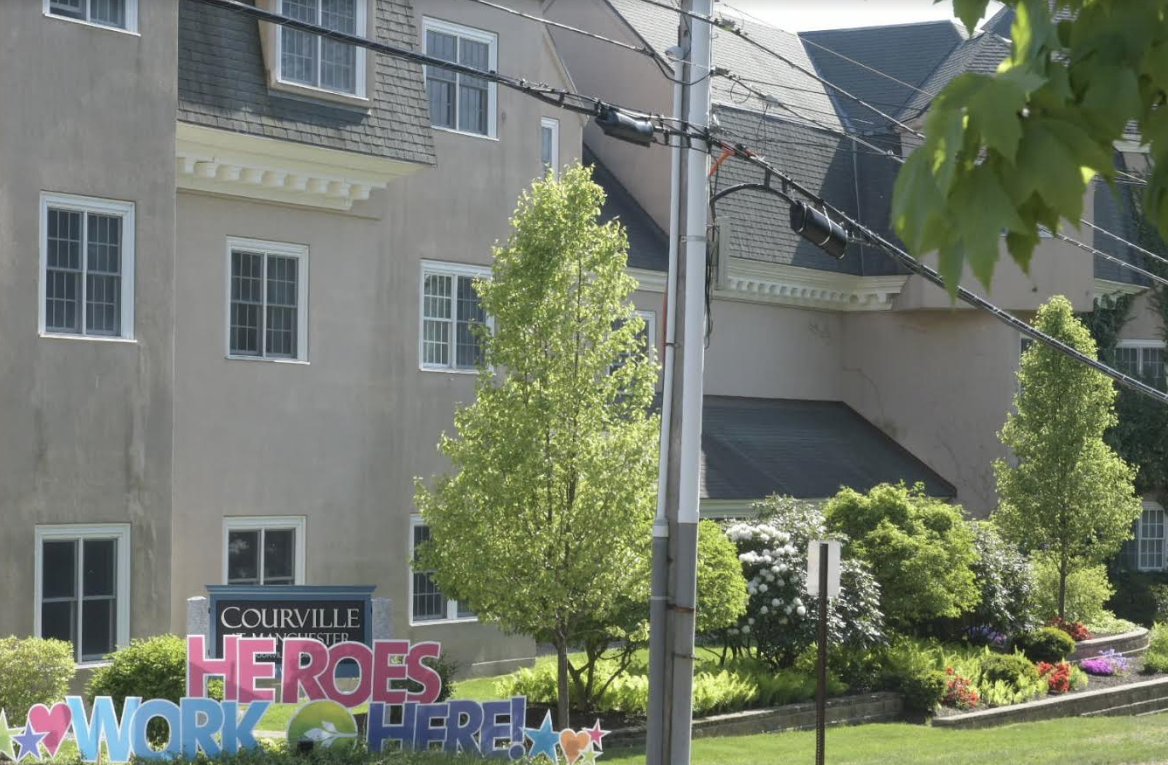 The Courville in Manchester has one of three new COVID-19 outbreaks at extended care facilities.

CONCORD – As the state reported four new deaths and three new outbreaks of COVID-19 cases at extended care facilities, health officials announced that workers who have face-to-face contact with the public or co-workers as they return to work can now get testing for the virus.

Health and Human Services Commissioner Lori Shibinette announced outbreaks at extended care facilities in Londonderry, Manchester, and Plaistow with a total of 17 such centers in the state experiencing outbreaks.

She spoke at Gov. Chris Sununu’s news conference in Concord on Tuesday.

The new ones are at All American Assisted Living in Londonderry where six residents and 11 staff have been diagnosed, The Courville at Manchester with six residents and six staff diagnosed, and the Kimi Nichols Center for adults with developmental disabilities in Plaistow with three residents and two staff members all testing positive, Shibinette said.

The testing could be particularly valuable for those who are heading back to work as a number of businesses begin to flex open under Sununu’s Stay-at-Home. 2.0 reopening plans.

Those individuals can go to one of nine locations now available across the state (with two new ones just open in Londonderry and Keene and ones in Plymouth, Tamworth, Rochester, Keene Concord, Lancaster, Milford, to be tested along with any health care worker, daycare worker, those who have a symptom of the virus, those with compromised immune systems, and those who live with them, Shibinette said.

There are no cost barriers, she stressed. The state also has go-teams that are mobile and can handle a group of employees to be tested in the parking lot at a business, Shibinette said.

The new category of testing now allows for existing workers who have a lot of contact with the public (such as grocery store workers) those who work side by side with others and those who are returning to work to be able to be tested.

She said demand now is equal to supply for testing and people can likely get same-day testing anywhere in the state. Shibinette announced 34 new cases of COVID-19 Tuesday, with 1,467 current cases of the virus in the state and widespread community spread noted. Hospitalization rates are steady at 10 percent.

About 60 percent of residents who contracted the virus have recovered, Shibinette noted. She said there is wide community transmission and lot of non-symptomatic individuals out there, particularly in testing in nursing home workers.

Sununu said more than 7,700 businesses have filed preliminary applications to receive part of the $400 million grant program he has earmarked for small businesses from the federal CARES Act. He noted there is a deadline of Friday afternoon to apply at revenue.nh.gov. and thereafter, the money will be distributed to help ease some of the economic burden caused by the virus.

“Everyone is making sacrifices,” Sununu said, indicating that some businesses that have violated his orders against congregating in large groups, including a Groveton motorsports park owner who claims he had to open to save his business this weekend, will be handled on an individual basis by the Attorney General.

He said he felt that the public did a good job of social distancing over the Memorial Day Weekend and thanked the state for its overall cooperation.

Earlier Tuesday, Sununu said he signed an executive order focused on ensuring that those with special education plans be offered compensatory services during COVID-19.
“We know too many students are at risk of falling between the cracks,” Sununu said, and the order is focused to help those who have individualized education plans.

Sununu said he estimates that there will be a $500 to $700 million “hole” in the budget caused by the virus but said he hopes some of that will be backfilled by the federal government, there might be some elimination of programs and services but the state would absolutely not entertain the idea of a broad-based sales or income tax under his watch.

That, he said is what leadership is, making tough decisions.

Sununu said he did not know why wearing a mask and requiring, as some states do, wearing a mask has become so political.
Perhaps, he said, because people are looking for something to argue about.

“We encourage folks to wear them,” Sununu said, adding most people do.

This month is Lyme Disease Education Month and Sununu suggested people visit  tickfreenh.org. to get ideas on how to protect themselves from this illness at the same time they take precautions against COVID-19.