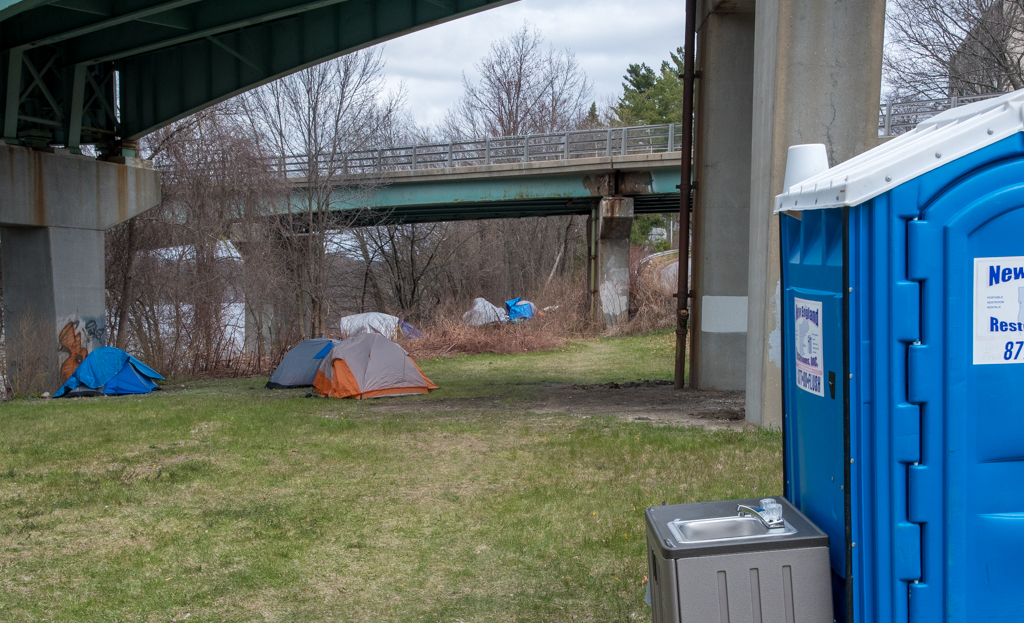 A homeless encampment on Canal Street under the Amoskeag Bridge in Manchester with newly installed port-a-toilet and hand-washing station. Some homeless people moved to camps for fear of catching COVID-19 in shelters.

CONCORD — A perfect storm is brewing for the state’s housing market due to the COVID-19 pandemic’s effect on the state’s economy.

At Monday’s meeting of the Legislative Advisory Board of the Governor’s Office for Emergency Relief and Recovery, housing advocates and officials outlined several proposals to stabilize the state’s rental market and help homeowners when moratoriums on evictions and foreclosures expire.

“We are on the brink of an eviction crisis,” said Elissa Margolin, Director of Housing Action NH. “A perfect storm is coming together from a number of sources.”

Before the pandemic, many renters were paying about half their monthly income for rent in a very tight market and many renters lost jobs when businesses shut down, she said.

“There are a growing number of renters who have the inability to pay,” Margolin said. “There is going to be a pent-up demand for evictions from property owners as we approach the end of the moratorium.”

Her belief was echoed by Sarah Mattson-Dustin, executive director of NH Legal Assistance, who said 40 percent of her organization’s cases involve housing.

“The moratorium is staving off an eviction crisis right now,” she said. “We do not want to see a single family be wrongly evicted.”

Dean Christon, executive director of the NH Housing Finance Authority, said rent delinquencies are up between 10 to 30 percent here and nationwide and are expected to increase.

The delinquency impacts housing security for the renter but also the owner, who without the usual revenue stream, cannot meet obligations like loan payments, property taxes and utilities, he said.

He and others are proposing a short-term rental assistance program that would make payments directly to property owners for three to six months.

Christon said to be effective the commitment needs to be significant, ranging from $25 million to $100 million and suggested the money be distributed through an existing effort by the Community Action Program.

Many mortgages in New Hampshire are federally guaranteed Christon said and are included in the CARES Act, but about 30 to 35 percent are not, mostly manufactured houses, which do not qualify for the federal program.

He said people need to understand they may put off mortgage payments, but they need to repay the deferred money. Homeowners will need professional counseling and legal support, Christon said.

He suggested a “rebuilding” of the old partnership among the banking industry, justice department and NH Housing authority, which operated in the last great recession.

There is some need for a program to help homeowners who need help making their mortgage payments or face foreclosure, he said.

“While it helps homeowners,” Christon said, it also helps the market “to avoid the negative implication with an uptick in foreclosures.”

Mattson-Dustin said if the last recession is any indication, her organization will experience a 20 to 25 percent increase in requests for help with housing issues. She said they expect to help with the counseling effort for homeowners.

Margolin said the COVID-19 pandemic situation made many realize the current homeless emergency, congregate-living system cannot go back to the way it was before COVID-19.

Many found additional space or reconfigured spaces they had both for sleeping and for food services, she said. “There are some infrastructure needs we cannot ignore any more.”

She estimates that 76 percent of the state 46 shelters will need some infrastructure improvements, particularly before the winter months.

Margolin said the number of homeless moving outdoors to encampments has grown as they moved out of shelters fearing infection.

Trust has to be reestablished with the people in the camps, she said, and that will take outreach teams, which are in short supply.

Communities have added toilets, showers and other services, but their tolerance is limited, she noted.
“We need to move people into more humane solutions.”

She said pulling services away from the camps will result in “people wandering around.”

The state has made great progress to reduce the number of homeless but the epidemic is challenging, Margolin said. “With the necessary stabilization of the rental market and reshaping the shelter system,” she said, “we can avoid an unraveling of what has been accomplished.”

Margolin is proposing a $25 million fund to help shelters with structural work needed to make them safer.

The advisory committee will meet June 3 at 1 p.m. to discuss additional recommendation for spending the $400 million remaining from the $1.25 billion CARES Act money including housing programs.

Several members of the legislative advisory group asked how information about aid programs announced by Gov. Chris Sununu like the $400 million Main Street Relief Program for businesses and the $60 million Nonprofit Grant Program would be tracked.

“How will we track spending in those different funds, who gets grants, which organization or business,” she asked. “Is that tracked in the GOFERR office? How will the public know?”

GOFERR executive director Jerry Little said his office will have information on who received grants and how much they received. The information will be posted very quickly on the website once the grant is made, he said.