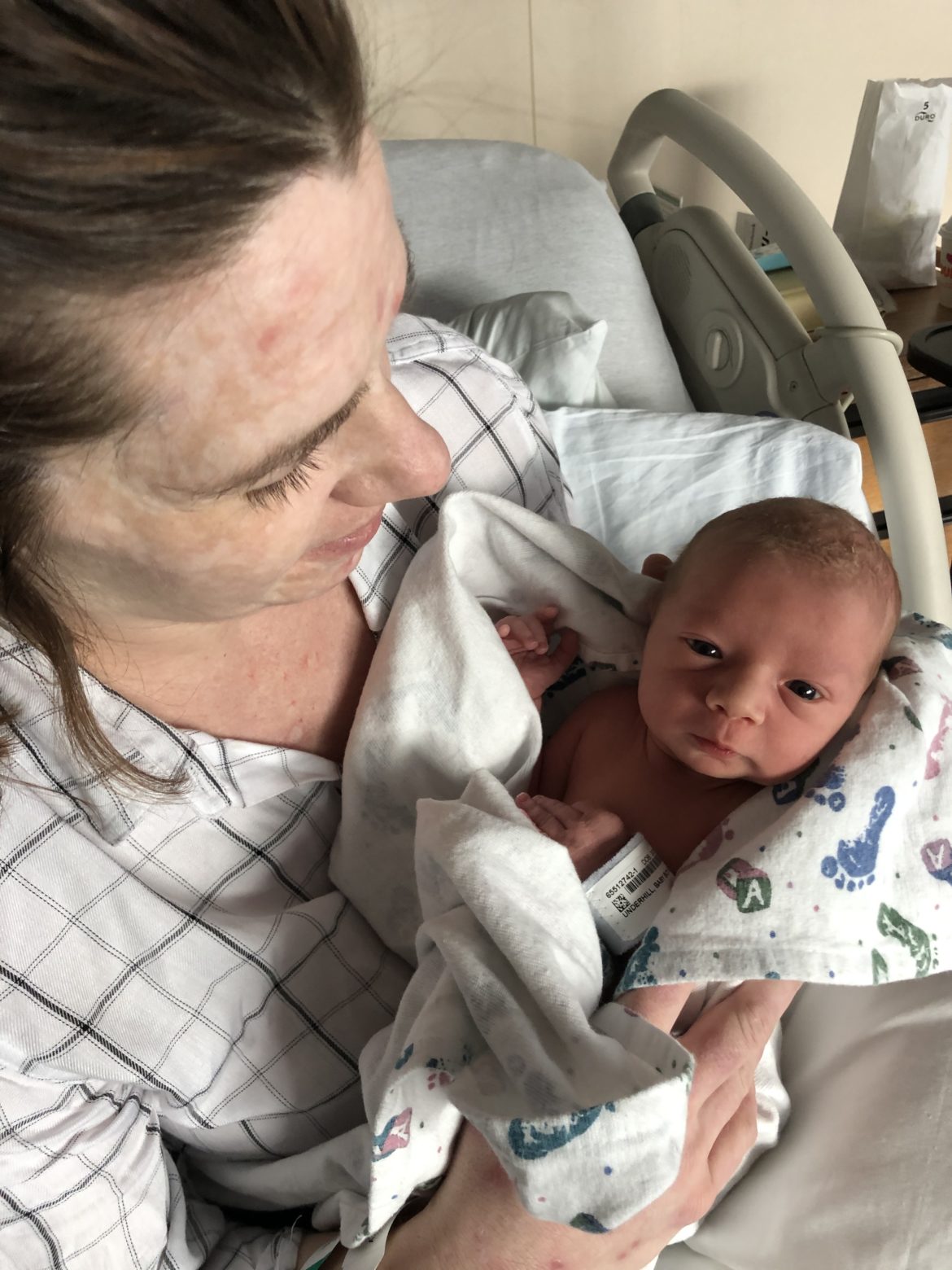 Mallory Underhill and her newborn son Griffin are pictured Tuesday at Dartmouth-Hitchcock Medical Center in Lebanon.

LEBANON – A Grantham woman who gave birth Monday and was ordered back to jail unable to post $5,000 cash bail may have gotten a last-minute reprieve Tuesday when the prosecutor agreed to a motion allowing her to go home with restrictions instead.

It was an abrupt and happy about-face for Mallory Underhill, 35, who spent the last month of her pregnancy in county lock-up unable to post the $5,000 bail while awaiting trial on a 2017 drug possession charge.

She and her newborn son, Griffin, were being cared for Tuesday at Dartmouth-Hitchcock Medical Center in Lebanon where she wondered much of the day if she would soon be separated from him.

“Babies need to be with their mothers,” Underhill said Tuesday by phone from the hospital.

“I’m feeling OK, but I’m not looking forward to going back to jail,” she said before getting the likely good news later in the day, although a judge has yet to sign off on the deal.

When she was transported to the hospital before giving birth, Underhill was under 24-hour guard and wasn’t allowed to have visitors as she waited alone in labor until Grafton County Superior Court Judge Peter Bornstein temporarily amended bail to place her on an electronic monitoring bracelet in the hospital. Then her mother was allowed to visit.

But Bornstein’s Monday order said that after Underhill gave birth, she would be returned to the Grafton County House of Corrections.

“If I was going to run, I wouldn’t have waited until I had the baby,” Underhill said. Documents in her court case show she has failed to appear for pretrial hearings at least five times.

Grafton County Attorney Martha Ann Hornick said she agreed with a last-minute motion Tuesday that would allow Underhill to participate in pretrial services and not go back to jail.

But on March 20, prosecutor Tara Heater pointed to Underhill’s frequent failures to appear in court and drug problems to say jail was the best place for her when Underhill’s lawyer argued she would be at risk of COVID-19 as a pregnant woman in jail.

Hornick said she has been monitoring Underhill’s case and although the threat of COVID-19 may have been part of her thinking for agreeing to the new motion, it was the birth of the baby that played the biggest role in her decision.

Although unlikely, Judge Bornstein could still deny the motion. ACLU-NH and New Hampshire Association of Criminal Defense Lawyers have been urging authorities to release vulnerable people from jails and prisons when possible because of COVID-19, but there has been no action taken to do so.

“This office has agreed to an amendment of bail,” Hornick said by telephone. Underhill will be free without posting the $5,000 bail as long as she participates in pretrial services, which means she won’t have to put up any money but will have to follow certain conditions.

“They have not been completely established,” Hornick said of the conditions. “The biggest thing is she’s able to go home and not go back to the jail.”

The reason for the shift, Hornick said: “She’s just had this baby. It’s more important to focus on the health of the mother and baby at this point.”

Underhill’s partner, Mark Avery, contacted InDepthNH.org seeking help when it looked like she would be going back to jail upon release from the hospital.

Avery said he couldn’t visit her because he is recovering from neck surgery. Underhill suffers from blood clots and she and he both worry about her health and the baby’s health especially with the number of cases of COVID-19 climbing every day in New Hampshire.

Underhill is not a flight or safety risk, Avery said, adding it would be impossible to raise the $5,000 cash bail.

“She has been clean since she found out she was pregnant,” Avery said.

The most recent warrant resulted from a missed court hearing on Feb. 27, Underhill said.

“I was sick. I was home in bed all day and they put out a warrant and came and got me,” Underhill said.

Underhill said the original drug possession charges stem from two pills that fell out of her purse while in the presence of Enfield police in 2017. One was Klonopin and the other Xanax, she said.

Avery was concerned about his family and said without Underhill’s mother they would be homeless.

“We have been together for 13+ years happily,” Avery said.

Devon Chaffee, executive director of the ACLU-NH, said it is important to reduce jail and prison populations if possible in the face of COVID-19.

“The ACLU and NHACDL are encouraging all stakeholders in the criminal legal system to work together to reduce our jail and prison populations,” Chaffee said.

“We’ve seen many states take a variety of steps to reduce incarcerated populations specifically to limit the risk of COVID-19 to vulnerable populations, such as those confined to the close quarters of a correctional facility. As part of this, we would hope that pretrial detention is sought only when it is absolutely the least restrictive means necessary to ensure the safety of our communities and a person’s return to court.”