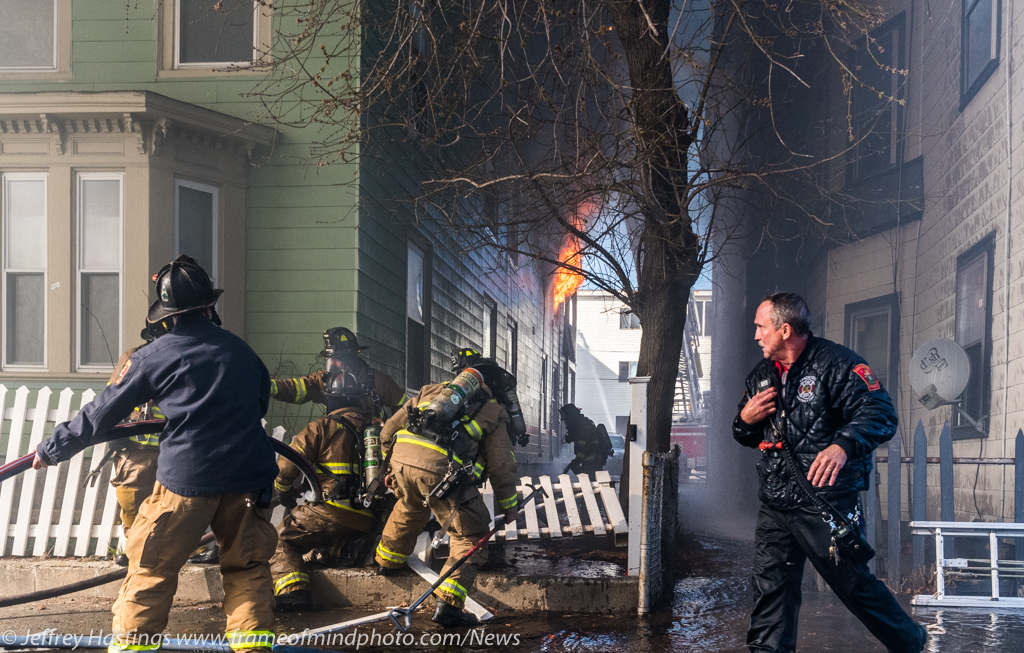 Firefighters scramble to contain a blaze on Spruce Street in Manchester that damaged six buildings and left a dozen families homeless.

MANCHESTER – Families picked through what they could find left in their apartments over the weekend after Friday’s three-alarm fire at 246 Spruce St. damaged a half dozen buildings that are all closed up now.

Several animals were rescued from the burning buildings by their owners and firefighters. Saturday a representative from the Manchester Animal Shelter was on scene assisting a homeowner who was missing four cats. Laura from the Animal Shelter said cats are very “stealth” and usually run and hide. She was optimistic that they would find the cats within a few days by setting up traps in the fire building and around the neighborhood.

The fire started at 3:31 p.m. Friday and brought 11 engines, three ladder trucks, one rescue, and two ambulances. Multiple towns and cities provided station coverage for Manchester. According to MFD District Chief Hank Martineau no firefighters or civilians were injured in the fire.

Twelve families were displaced in the fire which caused damage to six buildings. The Red Cross came to the scene Friday and assisted the displaced families helping to find them temporary living accommodations.

A food distribution at Manchester Police Athletic League on Saturday made it possible for several of the residents who lost their apartments to obtain food.

Investigators from the Manchester Fire Department are handling the investigation. They said no determination has been made on the cause and origin of the fire. Manchester Fire Inspector Mitch Cady indicated there is nothing at this time that points to anything suspicious.

Manchester firefighters worked at all their stations Saturday cleaning, repairing and restocking equipment.