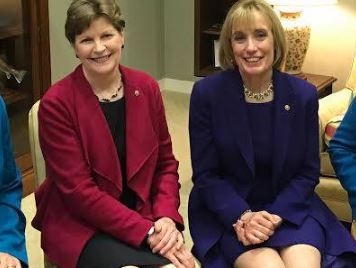 CONCORD – As the state announced 21 new cases of COVID-19 Thursday, U.S. Senators Jeanne Shaheen and Maggie Hassan agreed it must have been a tough call for Republican Gov. Chris Sununu to issue a stay-at-home order Thursday that closes all non-essential businesses by Friday at midnight.

Sununu also closed state beaches on the Seacoast and extended school closures to May 4. The latest total of patients with COVID-19 is 158, with Sununu saying the worst is still to come.

The two Senators, both former Democratic governors, indicated support for the governor’s call, which does not close hotels or liquor stores but does keep many employees at home.

They said it is the best way to get through this crisis as they hosted a live telephone town hall on Thursday night.

Shaheen said these are “very difficult and uncertain times for many of us.” She went over provisions in a Senate-passed economic stimulus package that will likely mean checks in the mail to most residents once they pass the House and head to the president to sign.

They praised Sununu’s actions to hold off on evictions and utility shut-offs during the crisis and noted that we are all in this for the long haul.

Asked whether it was right to essentially shut down businesses in the state, Shaheen said these are “tough calls.” Hassan said she knew it was a difficult decision. They agreed the blow could be cushioned by the economic stimulus package being pushed through Washington.

“Even with these massive investments, we know the days and weeks ahead are not going to be easy,” Hassan said.

One of the reasons the Senate passed the bill is to keep people on payrolls, she said.

With a limited number of tests, she said, “we don’t’ fully know the number of cases,” but action needs to be taken so the health-care system isn’t over overwhelmed.

“We are really just trying to slow the spread…and save lives,” Hassan said.
The focus of the one-hour teleconference was economic relief with thousands of people out of work and businesses looking at dire circumstances.

“This is the worst crisis I have seen in my time,” said Shaheen, but she added it is “one of those times in history that we need to come together.”

She was at home in New Hampshire while Hassan was still in Washington after passing the biggest $2 trillion bill ever to help American workers, businesses and hospitals. Hassan has said she will stay in Washington to prevent a possible spread of the virus to her son Ben, who is at risk of catching the virus.

The House is expected to take up the measure Friday and hopefully, Shaheen said, President Donald Trump will sign it at the end of the week.
Here are the essential aspects of the bill:
#1 direct payments of $1,200 a month for each adult/$2,400 for couples, so long as they filed a tax return in 2018 or 2019 and made less than $75,000 each. An extra $500 is going for dependents.
Those who got a direct deposit from their tax return will get the check that way. Others will get it through the mail.
#2 Thirty-nine weeks of unemployment.
#3 $150 billion for health-care workers during the crisis, including child care.
#4 Emergency loans for small businesses. It will provide $377 billion to businesses and nonprofits with the aim of keeping workers on during the crisis. The loans would allow forgiveness of the loan provided businesses kept employees on through the crisis. Small businesses also get immediate help of $10,000.
# 5 Corporate bailout of $500 billion with oversight to keep them from getting “soft buybacks.”

During the call, they were joined by Dr. Apara Dave, an Infectious Disease Specialist from Core Physicians in Exeter, Assistant Commissioner Perry Plummer from the New Hampshire Department of Safety and Greta Johansson, District Director of the New Hampshire office of the Small Business Administration.

Dave said some estimate the virus will peak in the next three weeks but after that point, the hospitals may find themselves overwhelmed.
To flatten the curve, we can give everyone, “a fighting chance,” she said.

Plummer said hospitals have been working together to deal with a possible surge.

“This is an unprecedented emergency,” he said, but the structure of emergency preparedness is working. “Certainly the system is stressed,” Plummer said.

Constituent Calls
Keith of Rochester, who is on Social Security, wondered if he would get the stimulus money and was told that he would, provided his income is within the guidelines.
“I spent way too much on groceries this month. It’s killing me,” he said.

Jen, who works in a grocery store and is around a lot of people, was worried about becoming sick.

Hannah of Pembroke asked whether there would be a payback of the stimulus package or whether it is taxable income.

She was told she would not have to pay it back.

“I am grateful for the help. My husband’s work has been cut down,” she said, and although she is considered an “essential” worker, her pay is not that much.

Scott a restaurateur in the North Country asked if it would be an easy process to get help from the Small Business Administration.
“Can we go to our local banks or is it going to be a long process?” he asked.

Shaheen said the intent is to try to eliminate some of the bureaucracy and paperwork for loans.
A number of callers wanted to discuss the lack of personal protective equipment available.

Hassan expressed frustration with the White House and noted the federal delegation and Gov. Sununu joined together to urge the White House to do more to increase the production of personal protective material and distribute it appropriately.

She said more could be done to push the Administration in that direction and she told the caller, a health care worker: “It’s really important to speak up.”

Plummer said, “I have to be honest with you, we don’t have enough…it’s not right.”
He added, “I hope we learn a lot from this long-term….the stockpile was not what we thought it should be.”