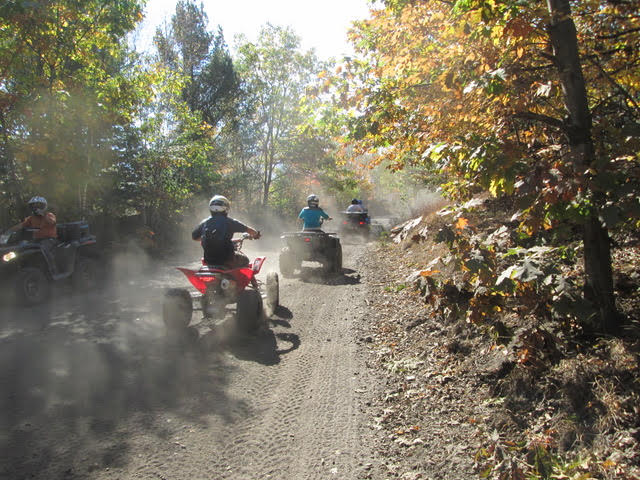 By JOHN PETROFSKY of Stewartstown

A recent op-ed regarding the expansion of the motorized rail trail in the Littleton area raised an interesting question about how ATVs on rail trails affects the community. A good question, and one that deserves an honest answer. We need to look at how management decisions impact the whole community, who will be most affected, those who would use the resource, and of course the economic potential.

Luckily, we have the resources to do this. A quick review of traillink.com, a railtrail reviewing site, as of December 30, presents a clear contrast between two rail trails in the North Country. The largely non-motorized Presidential Rail Trail gets a 5 star rating. The Ammonoosuc Rail Trail, which allows ATVs, gets a 3 star rating. Why the difference? Here are quotes from the three most recent comments for the Ammonoosuc Rail Trail as of December 30, 2019.

“No longer suitable for biking…unable to use the trail due to atv’s…chewing up the surface…Let’s hope NH doesn’t decide to ruin the other rail trails in the state. Really a shame.”

“Should have ATV in the name…the least user friendly for a cyclist [in NH]…miserable riding.”

“I doubt very many people bike the trail. The Ammonoosuc Rail Trail, in it’s [sic] current condition, is best for [only] ATV’s.”

Studies and surveys show the same result. A Wisconsin study of a rail trail in that state showed a similar finding. Across a broad range of users, from runners to hunters to bikers and and snowmobilers, ATVing was the single most antagonistic activity by a large measure. In other words it drove the other users away, across the board.

The overall picture is clear. Allowing ATV use on a multi-use trail impairs the experience for all other user groups, and discourages wider use. A trail that allows ATVs becomes a trail only for ATVs. Decision-makers need to realize this.  This is why the original 2001 ATV Study Committee recommended developing “self-contained” OHRV riding areas, not linear trails- in order to avoid the inevitable conflict.

Why does this matter? In New Hampshire, registration data shows that ATV owners are less than 2% of the total population, while more than 60% of the state’s population participates in non-motorized recreation. Opening up rail trails to ATVs serves a tiny portion of the public while alienating the rest. ATVers are already very well served by the state with miles of trails, and thousands of acres at Jericho state park plus numerous private riding areas. ATVs already get more miles than their small numbers would seem to justify.

If we turn our attention to the economic trade offs, a similar story emerges. Nationally, the exponentially larger numbers of non-motorized summer recreationists out-spend motorized users by 8-9x, and that’s being conservative since the motorized spending includes all the money going to ATV manufacturers, which in New Hampshire is zero.

If places like Littleton and Bethlehem want to leverage the rail trail to attract visitors and build a recreational economy, the focus should be squarely on non-motorized activities, that’s simply where the people and money are. ATVing only seems like an economic opportunity in the North Country because the state has focused so much on it, for dubious reasons explained shortly, and again, when you promote ATVing, you sacrifice the other, larger economic opportunities. It’s just bad economic policy. Places like Berlin, Groveton, and Pittsburg have been promoting ATVing aggressively for close to eight years now. Do they look like they are thriving…?

Recent data show that ATV sales are declining as the user base ages, and younger people gravitate to more active recreation. If we double down on a declining pastime, one which drives away other markets, Littleton and the rest of the North Country will, once again, have put all of its eggs in one basket. We have already seen how that tends to turn out. Shouldn’t we know better?

If the economic argument wasn’t enough, there are very strong public health concerns as well. The tires on OHRVs are particularly problematic because they create and disperse fine particulate matter known as PM2.5. Numerous studies show a clear link between increased PM2.5 exposure and premature death from heart disease, lung disease, and stroke. PM2.5 exposure can also trigger chronic diseases such as asthma, bronchitis, and other respiratory problems. Exposure by pregnant mothers to PM2.5 has also been linked to birth defects.

Scientists in one recent study estimated that for every 10 microgram per cubic meter increase in PM2.5 concentration, there was a 4%, 6% and 8% increase in all cause, cardiopulmonary, and lung cancer mortality respectively. Is this what Littleton wants in its neighborhoods, next to its sports fields, and near its assisted living facilities?

All of this raises a question: if the current policy of promoting ATV riding on rail trails is a disservice to our neighbors, and bad for local economies, why does the Bureau of Trails keep pushing it, and presenting ATVs as the only avenue for opening up rail trails to public use? The answer is unsurprising and unnerving. The Trails Bureau is funded directly by ATV registrations and considers riders to be their “paying constituents.” They don’t get funding from runners, bikers, equestrians, etc. This makes for a clear conflict of interest in its decision making process, and the Bureau of Trails is best understood as the Bureau of Motorized Trails. This is not the Bureau’s fault per se, it’s how it was set up, but perhaps decisions regarding limited resources like rail trails should be made by a bureau or agency that considers the entire state its constituency.

Littleton and Bethlehem have made great strides recently in attracting a diversified tourist base and those looking for an active outdoor lifestyle. Expanded ATVing on multi-use trails will undermine this progress. If Littleton and Bethlehem are to make the most of their rail trails, they should make the new extension non-motorized only. They and other towns might also re-evaluate the existing Ammonoosuc Rail Trail; making it non-motorized in the summer would attract a much wider user base, and open up much greater economic opportunities, not to mention improve the quality of life for those living near it.

Less economic opportunity and worse health, not to speak of all the reasons Gorham is being sued by residents over this issue. (Two NH courts have recognized OHRV trails in residential settings as an actionable nuisance). Is that really the kind of development Littleton and Bethlehem want?