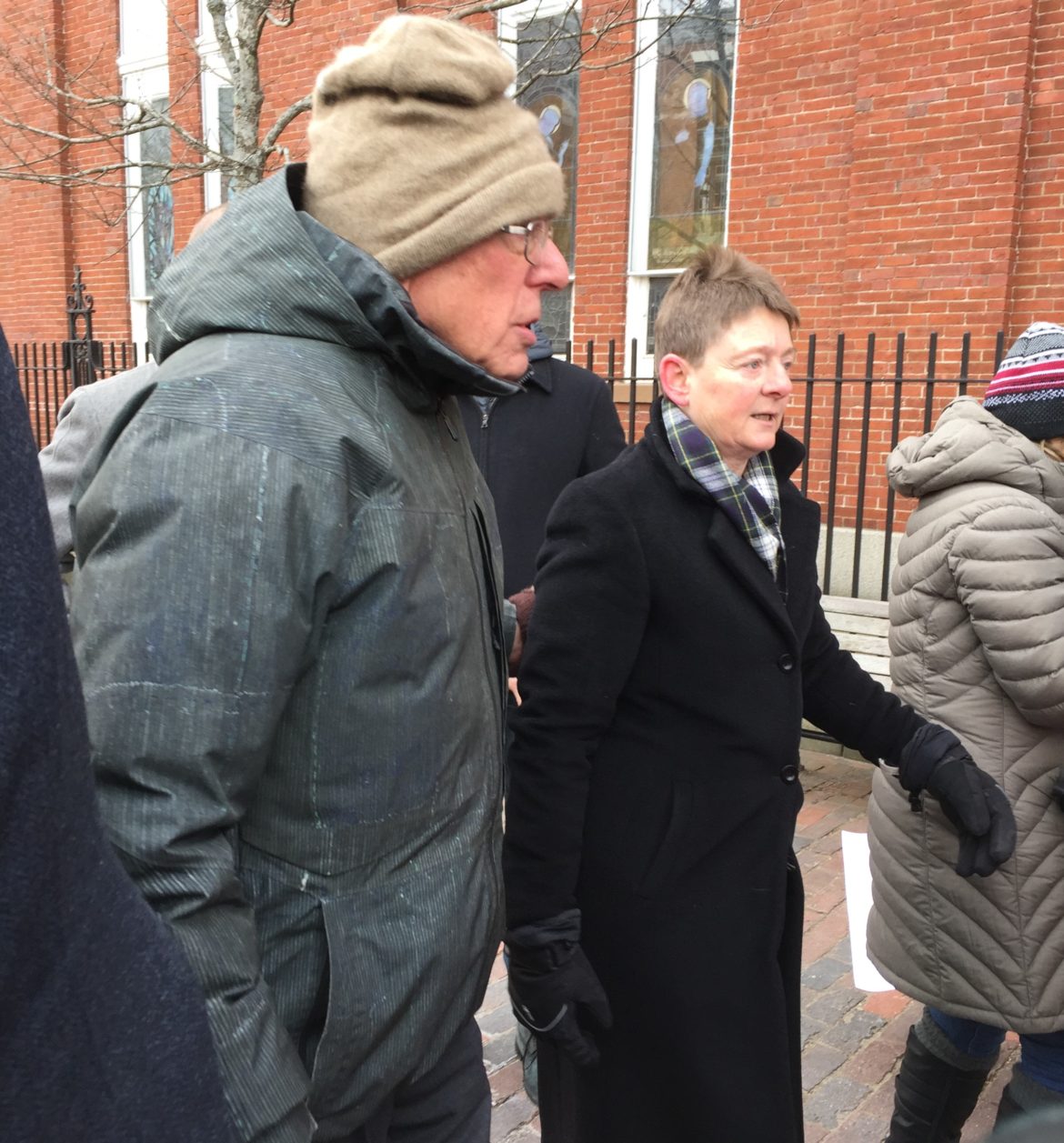 MANCHESTER – Welcome to the final Decoding the Vibe, the first-in-the-nation overview where my intention was and is to “invite you, dear reader, to join me before the rhetoric begins, before the backs straighten, the lights go on. I want you to come with me behind the scenes, watch the mic checks, meet the people who go visit presidential candidates.”

On your behalf, on behalf of InDepthNH.org, on behalf of all voters, I have been traveling around New Hampshire to provide you insight into the candidates here in New Hampshire.  Saturday night, 8 February, I travelled to the McIntyre-Shaheen 100 Club Dinner in Manchester which was essentially a wrap up, a Pep Rally for Democratic Candidates and the Democratic Party.

I would have liked to have seen a cheer routine with all of the candidates – some basket tosses and pyramids would have been astonishing but no such luck. And I would have even volunteered to be a fly girl.

Alas, I witnessed excitement, hope and incredible energy.  It was very similar to the Netflix series, “Cheer” but, mercifully, no concussions or unfortunate drops.

Below are the wrap-ups from all candidates, from their moments before the Pep Rally some sound bites for you from a busy year of campaigning to digest before you cast your vote on Tuesday.  They are in alphabetical order and I’ve noted when and where I saw them.

I thank you for allowing me in your life to give you my take, my insight, my view.  It’s been a pleasure being “boots on the ground” and inviting you to the Granite State and the first-in-the-nation primary.

The vibe of Joe Biden in Dover on Friday, 12 July at Castaways Restaurant and Lounge felt a lot like the drawer I have in my house we call the “everything drawer.”

It’s got the half-started rolls of tape, the knee brace, matches, an empty Altoids box, scissors, chargers from flip phones, candles and the emergency flashlight that, of course, will not work in an emergency because the batteries have died.

I felt a bit like when I go to that everything drawer to look for zip ties and am let down – again – because the zip ties are in the garage.

Again, the vibe of Biden felt like the everything drawer.  Some things just need to be thrown out. I’ll never use that box of mug hooks and that half inch of tape left on the roll. It might come in handy at some point but may as well go for the new.

The vibe of the night felt safe, felt confident, felt orchestrated and contrived. Pete did not mention the name of the current leader of the free world, provided only subtle digs at Republicans and offered nourishment to a very thirsty crowd.

He answered questions from a fish bowl, seemingly at random but obviously vetted.  He offered a safe, no extra credit needed because you already have 100s kind of feel.

The Decoding of Pete’s Vibe?  Safe, nourishing, thoughtful, Midwest…slow and steady but solidly passing because I did my homework as soon as it was assigned.

And I’m in class early. Do you need a pencil? I have an extra.

Pete Buttigieg – not sure how it’s pronounced? I’ve got that covered, too – Boot Edge Edge.

When Tulsi first arrived at the American Legion, she asked everyone to stand for the pledge of allegiance and invited all veterans to stand and be recognized. She’s tough, the vibe of Tulsi is soldier, combat veteran.

And those who work with Patrick were deeply kind, friendly.  I liked them. They gave the vibe of caring rather than, “What are you going to do for me?”

There are nine days left here in New Hampshire, it’s lovely being on the end of a long season and Patrick was someone I really had no interest in seeing. But the vibe?  He’s one to watch; he’s kind, he listens, he surrounds himself with good people.

So, here at my Decoding the Vibe desk, as there are six letters in “Bernie,” any question, statement or observation will be communicated in a tight package of six magic words.

And some of the more provocative six word statements from Sanders himself?

In first week: Medicare for All.

This is not a radical idea.

You are going to be covered.

Stop worrying about your rich friends.

We have won the intellectual debate.

Warren continues her own run, with facts and quick thinking and energy hard to beat.

The vibe of any event can be felt even before entering by virtue of checking out the cars parked outside.  On Monday, Sept. 2, Mass. Sen. Elizabeth Warren spoke to a crowd that parked along the streets leading to a bucolic home in Hampton Falls.

When I met the official Warren campaign workers, those who have decided to devote their lives to this campaign, my takeaway was that they were probably all National Honor Society members in high school or, as my Massachusetts friends would say, “wicked smaht.”

So, Decoding the Vibe was inside the Southern New Hampshire University Arena at the Trump Rally Thursday night. The music blared, the lights were bright, the sea of red hats abundant – it felt very show boaty, very hyped, very orchestrated.

Weld referred to Trump as suffering from “malignant narcissism” and as one not “processing information” and with “zero preparation.”

The vibe?  Finally a Republican calling out the naked emperor.  What a relief.

The vibe of Weld felt humane, felt realistic, felt like being in someone’s company who reads, who reflects, who truly believes. “There is no such thing as government money, it’s taxpayers’ money.”

When asked by a friend, “Does he sound like a reasonable, sensible, respectable candidate?”

Yang is charged and smart, wore a subtle but trendy scarf and the vibe of the room reflected his persona: young, hip, educated.  And while I am both hip and educated, those attracted to Yang were decades younger than I.

And, well, that’s it.  You’ll note there are candidates I did not have the opportunity to meet, did not collect the vibe. Alas, dear readers, there is still time, still time.

The opinions in columns and editorial cartoons do not reflect those of InDepthNH.org, its board of directors or underwriters.