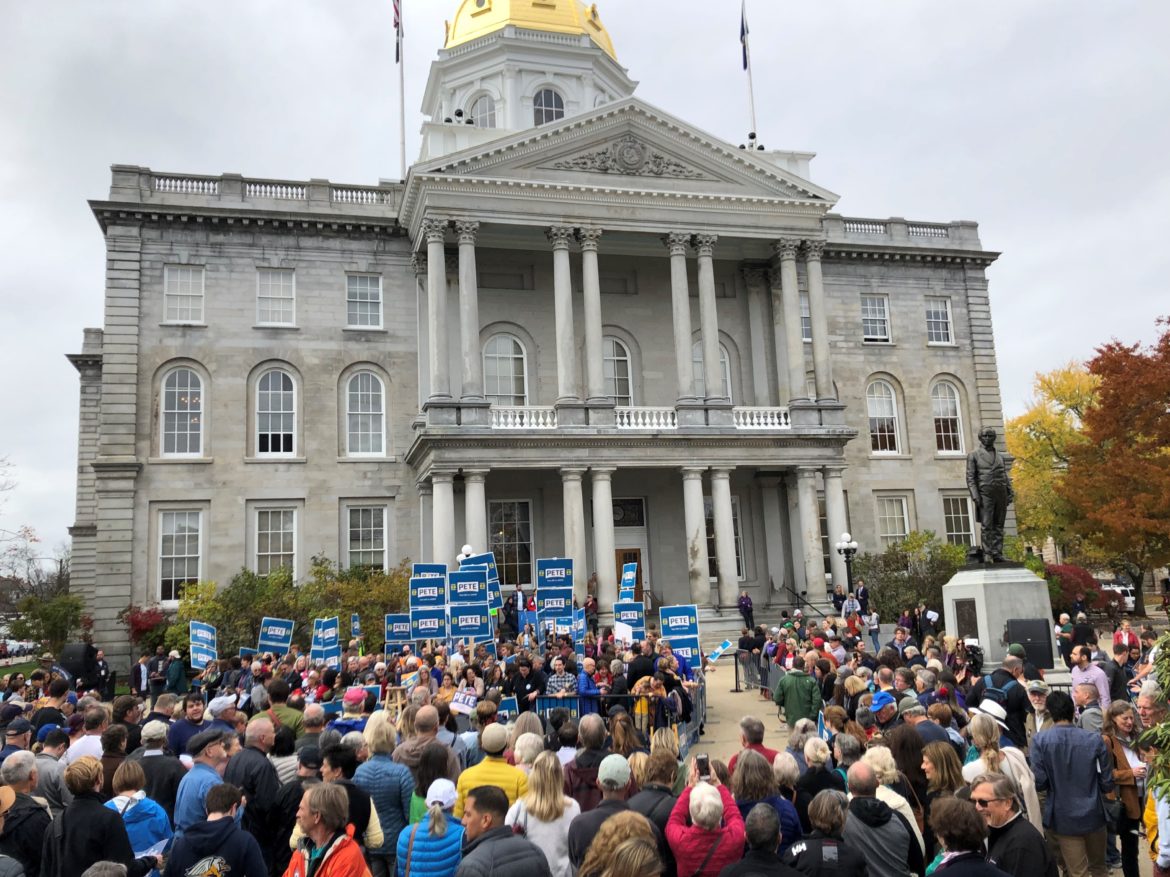 Mayor Pete Buttigieg brought plenty of supporters to his historic moment in front of the State House in Concord.

The primary filing period began Wednesday and will run for the next two weeks with candidates or their surrogates signing up and placing their $1,000 filing fee on the desk of Secretary of State Bill Gardner at the State House.

Pat Provencher of New Hampton came to the State House wearing a red, white and blue jacket with the stars of the American flag on it, and a cowboy hat. She held a big “Pete” sign.

Provencher said she was so excited to see her candidate.

“I just love everything about him,” Provencher said.
Asked if she had met the candidate, she put up three fingers and said, “Yes, I have met him three times.”

And she was about to meet him a fourth time.

Provencher waited patiently for the elevator doors to open and out strode the candidate, shaking hands with everyone. When he saw her, Buttigieg gave her a big hug.

The marble halls were lined with supporters shouting “Pete! Pete!” as he made his way to the Secretary of State’s office where the national press waited to record the filing.

He then went downstairs to the visitor’s center where he signed some posters for the wall, met the staff and then went out to talk with the fourth graders from Nashua’s Sunset Heights Elementary School.

The Democrat brought a few hundred friends with him and held a rally after on the State House lawn.

“We’ve been at it for a good year or so but this, this feels different,” Buttigieg told the crowd. “We are officially a candidate in the New Hampshire primary for president of the United States!”

“And with your support, this is one of the moments we are going to remember years from now when we look back on how we began a new, different, and dramatically better era in the life of the United States of America.”

Buttigieg continued: “We will see to it that the Second Amendment is never twisted into an excuse to do nothing at all to keep our children safe from gun violence in the United States of America.”

Referring to President Donald Trump’s border wall with Mexico, Buttigieg said that “the greatest global threat to the United States is not something you can keep out with a moat full of alligators, it is the threat of global climate change and the U. S. must lead the world in doing something about it.

“That will make us safer.”

He talked about freedom.

“Ours is an understanding of freedom that knows that there is more to freedom than cutting a regulation or a tax on a giant corporation. Freedom is not about Amazon’s freedom to not having to pay any taxes at all. Freedom is about our freedom to live a life of our choosing in America.”

Buttigieg was beaten to the punch to be the first candidate to file. At 8 a.m. when filing began, Mark Stewart filed. A Dartmouth graduate with no elected experience, Stewart has filed before as a Libertarian candidate.

Buttigieg is expected to be followed Thursday at 11:30 a.m. by Vermont Sen. Bernie Sanders and the rest of the candidates to make it official in the coming weeks.

On Thursday, Republican Vice President Mike Pence is expected to file on behalf of Trump who is seeking re-election.