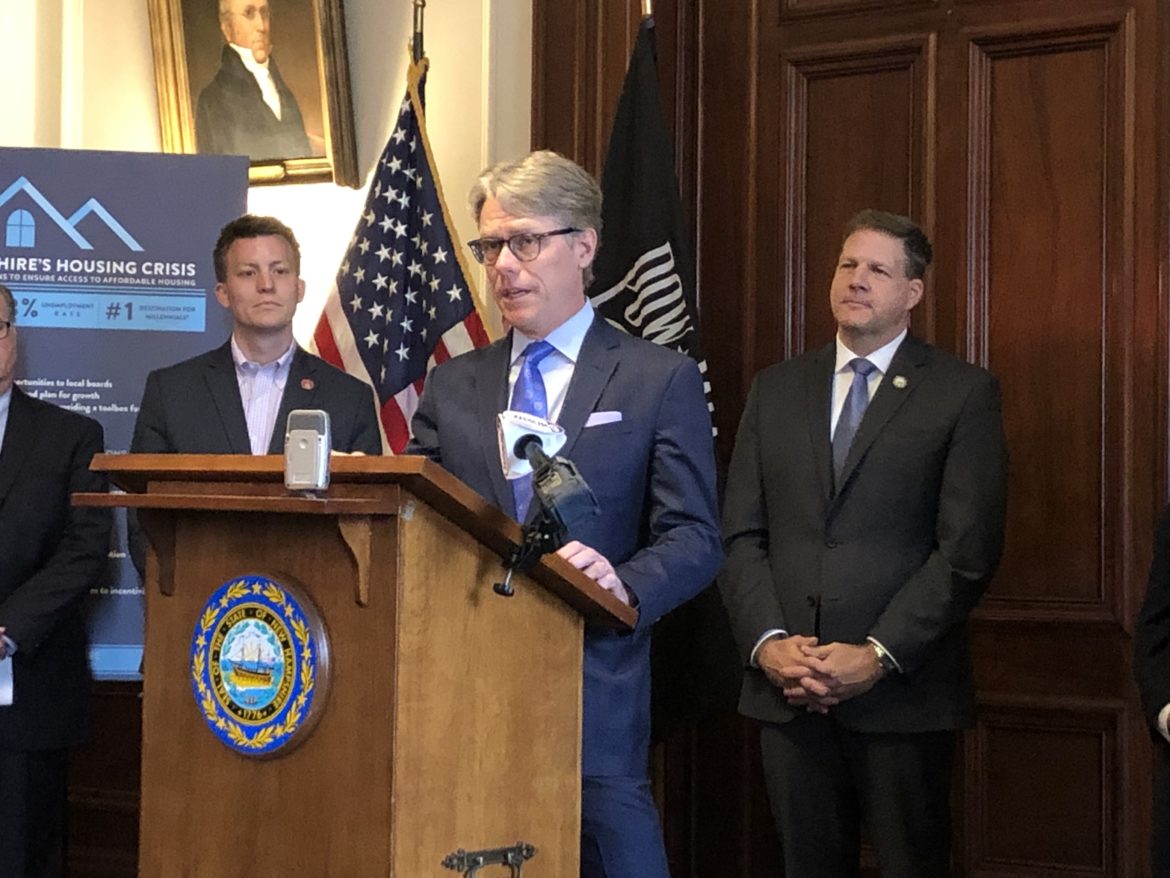 Taylor Caswell, Commissioner of the Department of Business and Economic Affairs, discusses the governor's task force on housing at a news conference on Wednesday. Gov. Chris Sununu is pictured behind him.

Gov. Chris Sununu, R-NH, along with young legislators and housing activists who worked on his task force, have come up with a plan and set of recommendations to ease the problem. They spoke about the plan Wednesday at a news conference at the State House.

“We’ve done great stuff with the economy,” Sununu said, “but with housing, we still have an opportunity to do a little more.”

The governor convened the task force to look at the issue bringing together stakeholders and on Wednesday announced some solutions. Some of the ideas will become legislative bills while others can be handled by executive action.

Most of the recommendations will be in two bills being sponsored by state Reps. Joe Alexander, R-Goffstown, and Willis Griffith, D-Manchester, who along with Tom Loughman, D-Hampton, and Gates Lucas, R-Sunapee worked on the governor’s task force helping to craft legislation.

One bill will allow TIF Districts to be used for residential development. It will also create a business profits tax incentive for developers and provide for a reduction in the real estate transfer tax for the sale of new homes under $300,000.

Another bill will look to streamline the decision-making process for planning boards and create a mandatory decision timeline for courts in appeals of local land use board decisions.

The rest of the plan can be accomplished through executive action.
Rep. Griffith thanked the governor for prioritizing the issue of workforce housing.

“We welcome the thoughtful discussions,” he said, hoping it will “bring meaningful change to the housing ecosystem in New Hampshire.”

Asked how success would be defined, either in terms of the number of new housing units or the percent of vacancy rates, Dean Christon, executive director and CEO of the New Hampshire Housing Finance Authority, said the hope is that the measures can create an environment for housing development.

“The sense is now that that is not happening,” Christon said. He said there is a lack of transparency.

Sununu said less than 1 percent “is not a healthy metric….but we don’t want too much.”

He said some towns are already doing good work toward solving the problem and he listed Dover, Rochester, and Franklin as “making some steps in the right direction on streamlining the process.”

Also, Claremont and Berlin have dropped barriers while some other communities, which he did not list, have “put up barriers” to creating workforce housing in their cities and towns, Sununu said.

At least, he said, the bills and measures will “bring the discussion to a statewide level.”

Final text of the bills will be available after final sign off for House bills, which is Friday, November 1st.